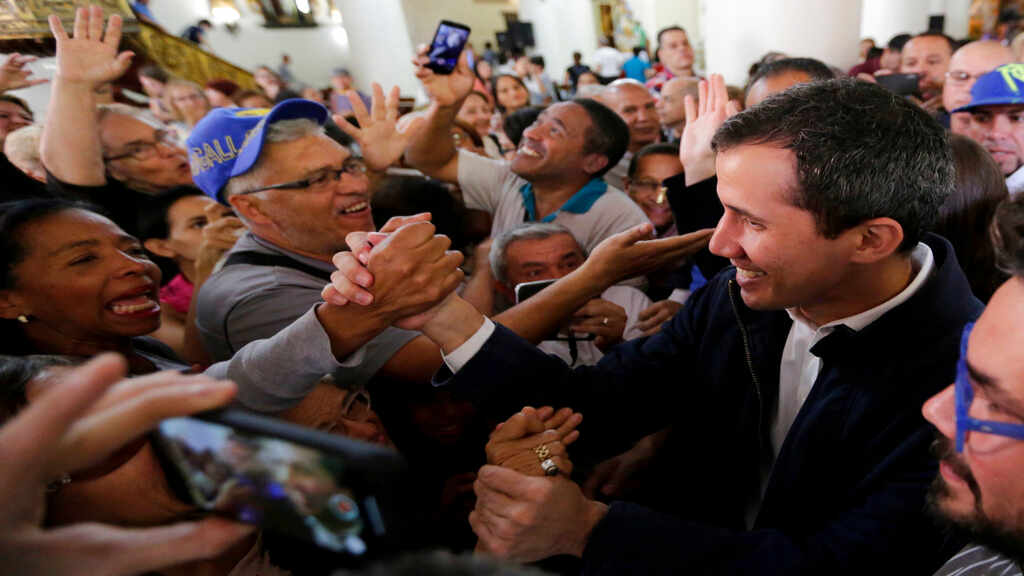 Opposition National Assembly leader Juan Guaido, right, who declared himself interim president, greets supporters as he leaves church after attending Mass in Caracas, Venezuela, Sunday, Jan. 27, 2019. Guaido says he is acting in accordance with two articles of the constitution that give the National Assembly president the right to hold power temporarily and call new elections. (AP Photo/Fernando Llano)

The struggle for control of Venezuela turned to the military Sunday, as supporters of opposition leader Juan Guaido handed leaflets to soldiers detailing a proposed amnesty law that would protect them for helping overthrow President Nicolas Maduro.

At the same time, Maduro demonstrated his might, wearing tan fatigues at military exercises. Flanked by his top brass, Maduro watched heavy artillery fired into a hillside and boarded an amphibious tank.

Addressing soldiers in an appearance on state TV, Maduro asked whether they were plotting with the "imperialist" United States, which he accused of openly leading a coup against him.

"No, my commander-in-chief," they shouted in unison, and Maduro responded: "We're ready to defend our homeland — under any circumstance."

The duelling appeals from the two rivals again put the military centre-stage in the global debate over who holds a legitimate claim to power in the South American nation.

The standoff has plunged troubled Venezuela into a new chapter of political turmoil that has already left more than two dozen dead as thousands took to the streets demanding Maduro step down.

It erupted when Guaido, the 35-year-old leader of Venezuela's opposition-controlled congress, declared before masses of supporters last week that he has temporarily assumed presidential powers, vowing to hold free elections and end Maduro's dictatorship.

President Donald Trump and several foreign leaders quickly recognised Guaido as Venezuela's legitimate leader, prompting Maduro to cut ties with the U.S. and order its diplomats from Caracas within 72 hours. The U.S. defied him, saying Maduro isn't the legitimate president, and Maduro relented, suspending the deadline for 30 days for the sake of opening a dialogue.

Venezuela's crisis came before the U.N. Security Council on Saturday, which took no formal action because of divisions among members. Russia and China back Maduro. But France and Britain joined Spain and Germany in turning up the pressure on Maduro, saying they would recognize Guaido as president unless Venezuela calls a new presidential election within eight days.

"Where do you get that you have the power to establish a deadline or an ultimatum to a sovereign people?" said Venezuelan Foreign Minister Jorge Arreaza. "It's almost childlike."

Guaido's supporters made their case directly to soldiers on Sunday, handing them leaflets that urged they reject the socialist leader and explaining how they could be eligible for amnesty if they help return Venezuela to democracy.

In Paraiso, an area of Caracas where residents and the National Guard violently clashed, opposition lawmaker Ivlev Silva, his hands raised over his head, walked up to a line of soldiers wearing riot gear and holding shields.

"The people of Venezuela believe in each one of you," Silva said, handing them the leaflets. Their commander responded that they were defending the Bolivarian revolution and support Maduro.

Similar scenes took place at military bases across Caracas, where one soldier burned his leaflet and another man threw a stack of them out a door, rejecting the opposition's plea.

In claiming residential powers, Guaido said he was acting in accordance with two articles of the constitution that give the National Assembly president the right to hold power temporarily and call new elections.

Emerging from Sunday Mass, where he honoured those killed and arrested in recent political protests, Guaido called on the armed forces not to shoot fellow Venezuelans.

"We are waiting for you and the commitment you have to our constitution," Guaido said. "Don't shoot at those who have come out to defend your family, your work and livelihood."

"I don't think any president of any party who is doing his or her job would be doing the job properly if they took anything off the table," he said. "So, I think the president of the United States is looking at this extraordinarily closely."