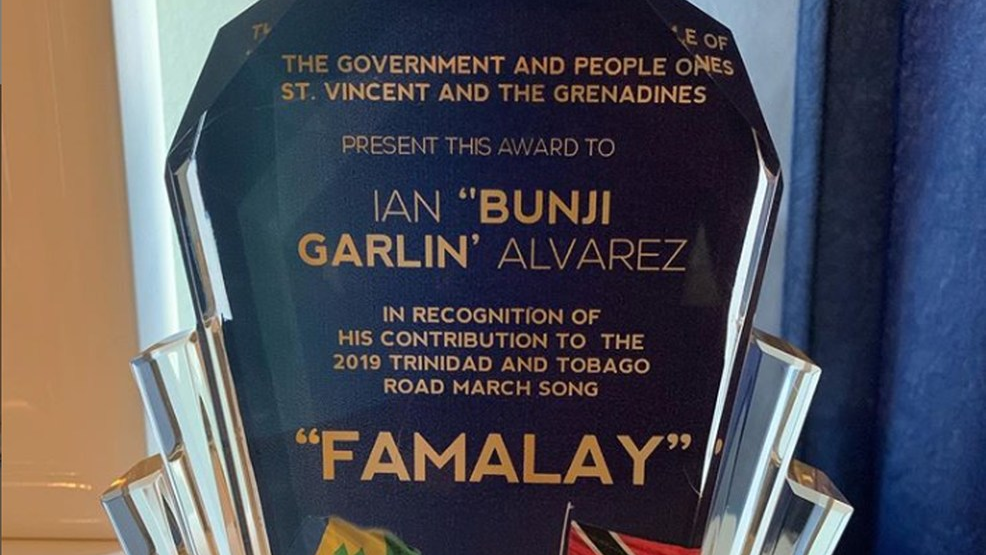 The St Vincent and the Grenadines Government has awarded the Road March winners of Trinidad and Tobago’s Carnival.

The four men received the awards during a welcome home celebration event in St Vincent for Skinny Fabulous.

Skinny extended an invitation via social media for his collaborators to join him and they did, joining him in a motorcade through the capital Kingstown and a homecoming party.

The award thanked each of the artists for their role in contributing to the Road March of Trinidad and Tobago.

Posting on Instagram, Bunji Garlin, who was accompanied by his wife Fay Ann Lyons, said the acknowledgment shows Caribbean unity.

“Let it be written in the halls. I want to honor this award from the Government and the people of St Vincent and the Grenadines. The Prime Minister The Hon Dr Ralph E Gonsalves, the nation’s leaders on both sides of the aisle, thank you. We received a hero’s welcome from the airport to the town and there was joy and celebrating in the streets. There is a new Caribbean air being inhaled and it’s one of a United people. There are many who for whatever reason don’t want to see a more unified Caribbean but to every one of them there’s a thousand more that will continue to fight for more unity amongst all our people. We may think we are segmented, fragmented and apart as the Caribbean to the eyes of the world but we are all the same. We know our differences but all these differences makes us all the same. Let’s continue to unite be it rewards, awards or not because unity in itself is its own reward!!! Thank you sir @skinnyfabulous sir @machelmontano sir @dadamuzic for having my household and I on this incredible journey of a unified force!! @fayannlyons @chekothari we thank you. Yours Truly The Viking @bunjigarlin