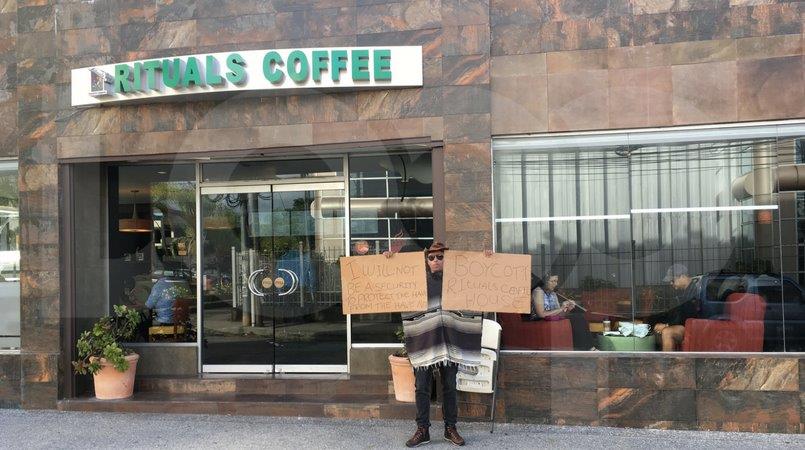 In this June 27, 2017 photo, Ian Smart holds up placards calling for a boycott of Rituals outside of the Maraval Road branch of the business.

Joint Trade Union Movement (JTUM) Leader Ancel Roget has called on the public to boycott a number of businesses owned by the Syrian-Lebanese community.

Speaking following a march through Port of Spain on Friday, Roget said it was time that the public realise the power they have and choose to not support the "one percent".

He was referring to comments made by businessman Mario Sabga-Aboud on a recent episode of CNN's Anthony Bourdain: Parts Unknown which featured Trinidad and Tobago.

During the episode, Sabga-Aboud said the Syrian-Lebanese community represented one per cent of the population but is the "most powerful" group in Trinidad and Tobago.

The businessman was forced to apologise for the comments after much public criticism.

Roget said the public must take a stand and refuse to support these businesses.

But Roget noted that many persons are unaware of the businesses owned by the so-called one per cent and said JTUM would be holding a meeting to compile a list of 120 businesses that should be boycotted.

The list will be distributed to workers, he said.

The JTUM leader also called on Prime Minister Dr Keith Rowley to immediately remove four Minister who he said were not satisfactorily performing their duties.

Roget called for a meeting with Rowley to address the concerns of the trade union movement.

He said if the PM does not meet with JTUM within the next two weeks, the unions will be increasing mobilisation efforts across the country.