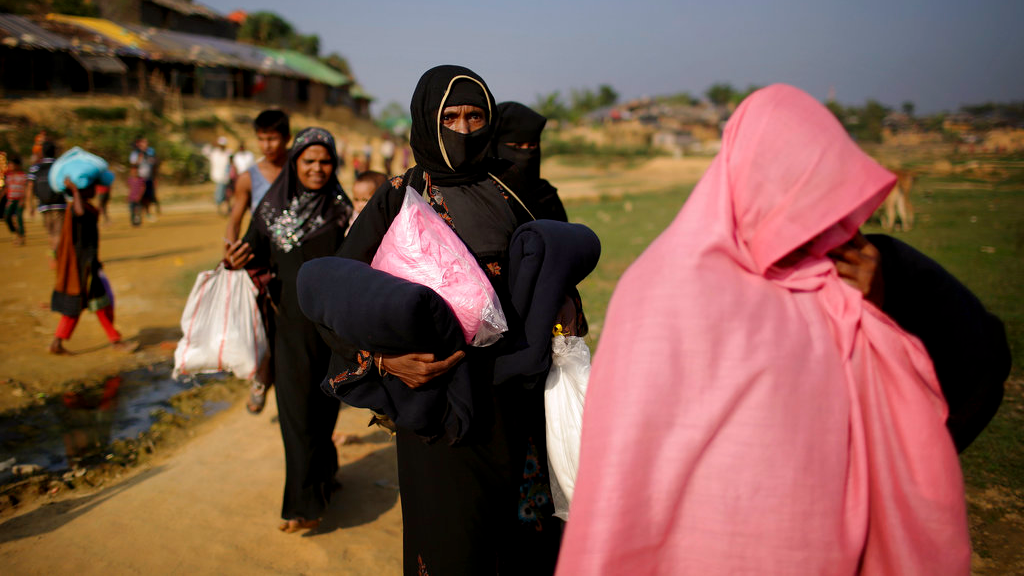 The gradual repatriation of more than 680,000 Rohingya Muslim refugees back to Myanmar from Bangladesh, scheduled to begin Tuesday, has been delayed amid widespread fears that they are being forced to return, Bangladesh said Monday. There was no immediate confirmation from Myanmar.

The refugees began pouring across the border into Bangladesh in August, fleeing waves of attacks by Myanmar security forces and Buddhist mobs.

While the two countries have signed an agreement to begin sending people home in "safety, security and dignity," the process has been chaotic and opaque, leaving international aid workers and many Rohingya afraid they would be coerced into going back to villages that they fled only months ago.

"The main thing is that the process has to be voluntary," said Kalam, adding that paperwork for returning refugees had not yet been finalized and transit camps had yet to be built in Bangladesh. It was not immediately clear when the process would start.

"If they send us back forcefully we will not go," Sayed Noor, who fled his village in Myanmar in August, said over the weekend, adding that Myanmar authorities "have to give us our rights and give us justice."

"They will have to return all our wealth that they have looted and hold people accountable. They will have to compensate us. We came here because we are fighting for those things," he said. "If we don't get all of this, then what was the point of coming here?"

Eventually, all the Rohingya who have fled Myanmar since August were to leave Bangladesh, according to the agreement signed late last year. Over the weekend, the U.N.'s migration agency increased the total estimate of those refugees to 688,000.

David Mathieson, a longtime human rights researcher who has spent years working on Rohingya issues, heaped scorn on the agreement ahead of the latest announcement.

"It's a fantasyland, make-believe world that both governments are in," he said in an interview in Yangon, Myanmar's main city, noting that security forces there had just forced hundreds of thousands of Rohingya across the border. "Now you're expecting them to come back, as if they're in a conga line of joy after what you did to them?"

The Rohingya Muslims have long been treated as outsiders in largely Buddhist Myanmar, derided as "Bengalis" who entered illegally from Bangladesh, even though generations of Rohingya have lived in Myanmar. Nearly all have been denied citizenship since 1982, effectively rendering them stateless. They are denied freedom of movement and other basic rights.

Many of the people who fled earlier violence and moved into displacement camps inside Myanmar have been unable to leave those settlements for years.

Most Rohingya lived in poverty in Myanmar's Rakhine state, near the Bangladesh border. Marked by their religion and their language — most Rohingya speak a dialect of Bengali, while most of their neighbors speak Rakhine — they are easy to target.

The recent surge of violence erupted after an underground insurgent group, the Arakan Rohingya Salvation Army, attacked at least 30 security outposts in Myanmar in late August. The military and Buddhist mobs then launched retaliatory attacks on Rohingya across Rakhine in a frenzy of killings, rapes and burned villages. The U.N. has described the violence as "textbook ethnic cleansing."

The attacks, which Doctors Without Borders believes have left at least 6,700 Rohingya dead, sowed terror across Rohingya communities. Most refugees came in the first month or so after the violence began, but some continue to trickle into Bangladesh, complaining of ill-treatment by authorities.

In early January, following up on their November agreement, Bangladesh and Myanmar signed a deal to begin sending back the refugees starting Tuesday. Officials have said they expect some 1,500 refugees to go back each week, though only refugees with identity documents — which most Rohingya lack — will be allowed into Myanmar.

Bangladesh and Myanmar are both eager to have the repatriations begin. Bangladesh has grown weary of hosting Rohingya who've spilled across the border for decades. More than a million Rohingya are now believed to live in Bangladesh. Myanmar, meanwhile, wants the repatriations to lessen the international condemnation it has faced for the violence.

In Myanmar, officials have started building sprawling camps for returning refugees. Forty buildings have been finished already in the Hla Po Kaung transit camp, enough for more than 3,000 refugees, state media have reported. Eventually, the camp will have 625 buildings, enough for 30,000 refugees. In theory the returnees will stay only temporarily in the camp before going home, though many Rohingya villages were burned to the ground during the violence.

In Bangladesh, there have been almost no signs of preparations. A Bangladesh official who oversees the area where most of the camps are located said last week that "we have not finalized anything yet."

Aid workers say some refugees may want to return — perhaps the 500 or so Bengali-speaking Hindus who also fled the Rakhine state violence, and the handful of Rohingya who have managed to acquire citizenship documents.

But how many more?

Not many, experts say.

"I think that the (Myanmar) government knows very well that only a few people will go back," said Chris Lewa, the director of the human rights research group the Arakan Project. But officials want the good publicity that could come with repatriations, she said.

"When the majority of Rohingya refuse to come back, the Myanmar government will say 'See, we have done what we can for them to return, but they refuse to come back and prefer to stay in Bangladesh, which was their own country,'" she said.

Inside Rakhine, there are few signs that people want their former Rohingya neighbors to return.

"International pressure, because of human rights and humanitarianism, means we have to accept them back, even though we don't want to," Than Tun, a Buddhist leader in Sittwe, the Rakhine state capital, said in a telephone interview.

He dismissed the idea that the Rohingya had fled their homes. "We think that these Bengalis have gone back to their original land — Bangladesh."

US declares 'ethnic cleansing' against Rohingya in Myanmar

US official: Rohingya should be returned safely to Myanmar