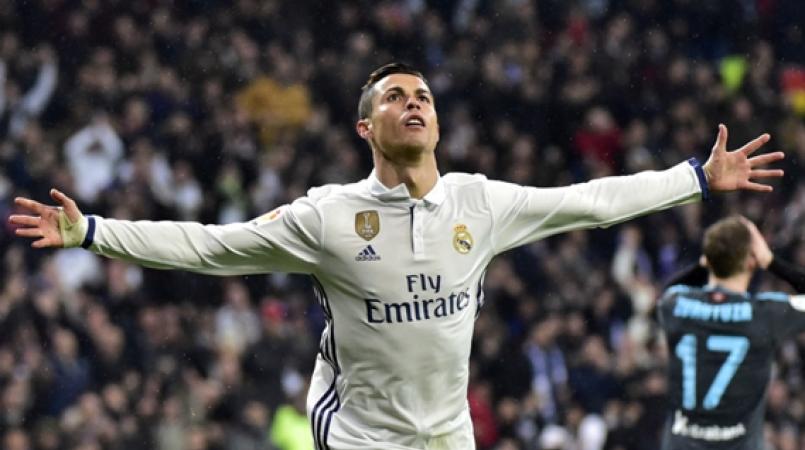 Cristiano Ronaldo says he never expected to score as many Real Madrid goals after his hat-trick against Atletico Madrid saw him reach 400 goals for his side – at least according to the club.

The 32-year-old's treble at Santiago Bernabeu earned a 3-0 Champions League semi-final lead for Madrid, who are claiming Ronaldo has reached 400 goals for Los Blancos even though official records state he is on 399.

The controversy relates to a deflected 2010 goal against Real Sociedad that Madrid credit to Ronaldo, even though the referee's report gave it to defender Pepe.

Nonetheless, Madrid president Florentino Perez presented Ronaldo with a shirt to mark the accomplishment, one which has delighted the Portugal international, who is seemingly in no doubt he has reached the 400 mark.

#HalaMadrid
Florentino Pérez presented @Cristiano with a shirt for his 400 goals with #RealMadrid !

"It is something very special," Ronaldo told Real Madrid TV of his goalscoring tally.

"It is a lot of goals and I didn't expect it. It is the fruit of the work of the whole team, my work, all the people who work in the club and the fans, who always support us.

"Playing for this shirt is always an extra motivation. I feel very happy and I want to try to give my best in the years that I have on my contract, to score goals as always and to help Real Madrid win titles.

"Scoring three goals made it a special night. I feel very good, I have prepared myself to be in good shape for the final stages of LaLiga and the Champions League.

"You also need a bit of luck, because I have been preparing but things are going well - not only for me, but also for the team.

"That's why I say that with dedication and hard work, as always, things come naturally. I'm happy and lucky I'm from this planet."

All in a night's work, @Cristiano #UCL pic.twitter.com/mGVNMBcAlD

Ronaldo added: "The team was phenomenal. We are one step closer to [the final in] Cardiff and we are happy. I'm very happy and it was a match full of emotions.

"To win 3-0 is incredible and it was an important victory. The dominance we had on the pitch shows that the players are fresh.

"We are very motivated and we want to get to the final of the Champions League. Now we hope to finish the job."

Ronaldo so good he could play anywhere - Zidane