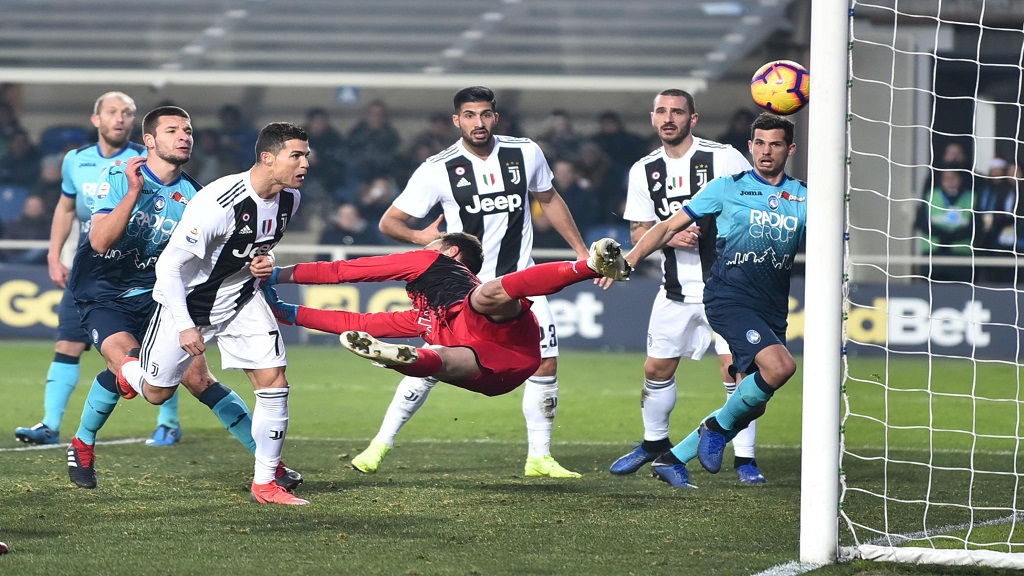 Juventus can't afford to give Cristiano Ronaldo a rest.

Massimiliano Allegri was forced to bring on Ronaldo for the final 25 minutes, while Juventus were trailing and down to 10 men. The Portugal superstar leveled but did not have time to completely rescue Juventus as they were held at Atalanta to 2-2 on Wednesday.

It was only the second time this season that Juventus have dropped points in Serie A, and gives a sliver of hope to Inter Milan and Napoli which faced each other later.

Napoli are nine points below Juventus, and eight above third-placed Inter.

The Bianconeri, as winter champions with two rounds to spare, took the opportunity to rest Ronaldo and some others. And it seemed as if that would no effect as Juventus took the lead after less than two minutes as Atalanta defender Berat Djimsiti turned Alex Sandro's innocuous-looking cross into his own net.

Rodrigo Bentancur almost doubled Juve's lead moments later but his strike was deflected onto the crossbar.

But Atalanta shook off all that and leveled in the 24th. Duvan Zapata gathered a Papu Gomez throughball, turned Leonardo Bonucci and scored in a fifth successive Serie A match.

Matters started to go wrong for Juventus eight minutes into the second half when Bentancur was sent off following a second yellow card.

It took Atalanta just three minutes to make the most of the numerical advantage as Zapata headed in a corner.

Allegri sent on Ronaldo in the 65th and he leveled 13 minutes later, heading in from point-blank range after Giorgio Chiellini flicked on a corner. Before celebrating, Ronaldo immediately grabbed the ball and raced towards the center circle, urging his teammates to do the same.

Juventus thought they got a stoppage-time winner but Bonucci's goal was ruled out for offside.

At the age of 35, Fabio Quagliarella is almost singlehandedly propelling Sampdoria into a Champions League qualifying berth.

Quagliarella was on target again — for the eighth successive Serie A match — with a stunning backheeled goal to help his side beat bottom club Chievo Verona 2-0.

Meanwhile, Lazio moved into fourth and the last Champions League spot with a 2-0 win at Bologna, which is managed by Lazio coach Simone Inzaghi's brother, Filippo.

Sampdoria were fifth, while AC Milan slipped to sixth, putting coach Gennaro Gattuso under more pressure after drawing at relegation-threatened Frosinone 0-0. It extended Milan's winless streak to five in all competitions. The Rossoneri also haven't scored in four successive Serie A matches.