Rondon slams ‘fake news’ on Manzanilla house being swept away 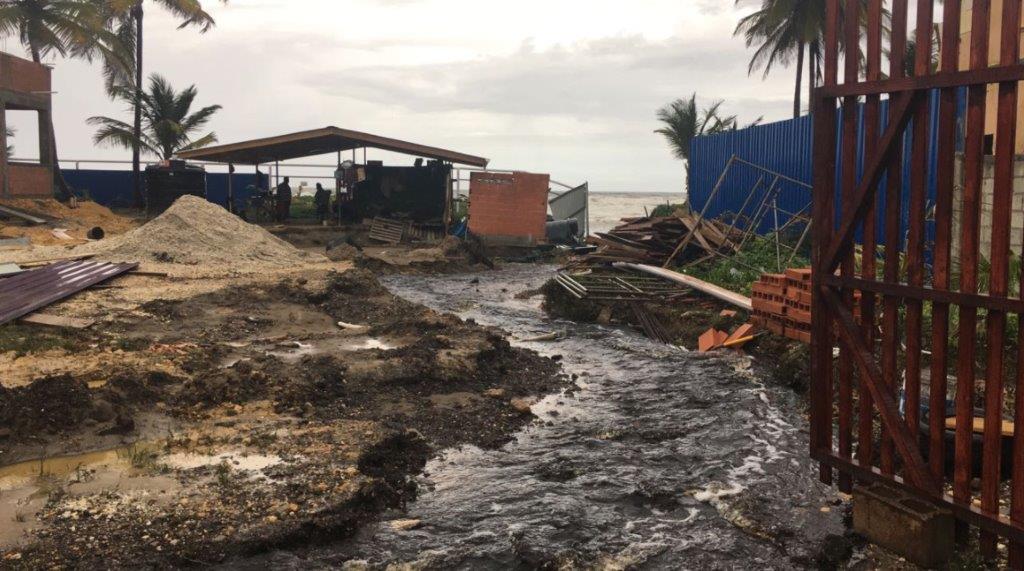 Photo via Twitter, The Ministry of Works and Transport

A portion of a property along the Manzanilla Main Road was washed away by flood waters, but Chairman of the Sangre Grande Regional Corporation Terry Rondon says it was the owner’s own actions that caused the damage.

Initial information from the Trinidad and Tobago Weather Centre, confirmed by the Office of Disaster Preparedness and Management (ODPM) indicated that the house collapsed as a result of flood waters and was swept away to sea.

However, Rondon, who spoke with LoopTT while on the ground providing relief efforts, sought to set the record straight as he said the information provided by the Facebook page and the ODPM was incorrect.

“What happened was the water kept flowing back into the road because the sand had clogged up the original drain running into the sea.

The backhoe cleared the area and the volume of water that came down undermined (the property) and a bathroom at the back of the house was swept away to sea.”

The damage sustained at the property, Rondon said, was the owner’s own doing.

“The owner of the home caused that damage to his own place… The drain that comes from the other side of the road was clogged up and in order for the water not to go into the property they had to clear the sand from the cylinder.

And in so doing, the gush of water that came through caused the structure at the side of the house to collapse.”

Rondon said the homeowner, through hiring a backhoe to clear the clogged cylinder, caused the damage to the property.

The Regional Corporation Chairman also had some harsh words for the ODPM which “confirmed” that the house collapsed and fell into the sea.

“The ODPM is holding on to a straw…they spread a false report… Those kinds of reports that they are giving, they are hanging on by a straw. This is giving people out there false news, that is not good news at all.”

Owner of the damaged property, Sangeeta Khoon Khoon, however, told LoopTT a different story to the one told by the Corporation Chairman.

She said she had been contacting the Corporation for over a year and was unsuccessful in her attempts to get them to come and clear the area of debris ahead of the rainy season.

Spotting a Corporation owned backhoe in the area, she spoke with the driver and requested that the lowest part of the land near an abandoned lot be cleared.

She said she was not at home at the time when they came to clear the land, and instead of clearing the land near the abandoned property, it cleared the land closer to her home, causing her bathroom to be swept away to sea.

Meanwhile, Cumuto/Manzanilla MP Christine Newallo-Hosein said there is a need for proper maintenance of watercourses in the area in preparation for the rainy season to prevent the extent of the flooding currently taking place.

She also identified drainage as another issue that needs to be addressed as she said the river is currently at the same level with the roadway.

And with no water crossing the roadway at the bridge, Newallo-Hosein said it is clear that portions of the roadway have dropped.

She’s calling on the relevant Ministries and agencies to rectify the situation.

The MP told LoopTT that with many having been left stranded due to the flood waters, her constituency office will launch a soup kitchen next week to ensure that burgesses have access to hot meals.

Newallo-Hosein said she was not appealing to the corporate community for assistance, but would be working with resources from her constituency office.