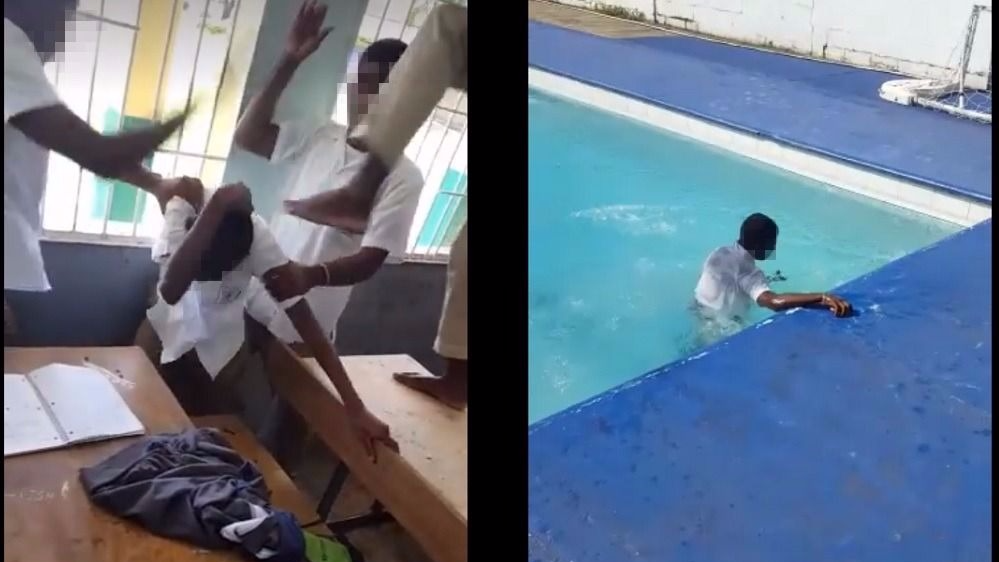 Viral videos showing one high school boy being tossed into a pool and slapped by other students has drawn outrage and debate among citizens.

The viral videos, which were shared to social media on Saturday, show one student alternately being slapped and kicked by his classmates, and in another video being pushed into a swimming pool.

The students involved appear to attend a secondary school in north-west Trinidad.

Many citizens expressed outrage at the act, calling for the matter to be investigated, however some called the incident a 'birthday session'; a term used for hazing rituals practised in some schools, mainly boy's schools, where students with birthdays are subjected to a series of unpleasant experiences.

Some people said the incident was unacceptable.

Lisa Bernard: "That is no game to play by no pool and in your school uniform no way."

Beverly Collette: "Extremely troubling.....what in the world are we teaching our children.......something NEEDS TO BE DONE .....this saddens me to the core....seems like an epidemic happening all over the world ......Lord please."

Chantal Charles: "If this child could not swim and God forbid had drown what would of been the outcome. I know if this was my brother I was fucking the whole school up."

Scasha Smith: "So what is the school administration doing !! First of all where is the teacher!! And other staff !! All of them should have been suspended."

Susan Doug: "This is why your kids kill them self that child is taking to much...I hope the police hold you to for what you and your friends did that child."

However others said they saw nothing wrong with the videos.

Stefon Jah Nathan: "Sure it wasnt he birthday ? Cuz them thing does happen on men birthday bess you stay home."

Frank White: "Apparently nobody went to school. These kinds of things have been going on a long time, just didn’t have cameras back then."

Jan Elle C: "Ok, lemme be devil’s advocate a little: In the first video they really don’t look like they’re hitting him to hurt him. Some lil soft clout (open hands even) and the boy on the desk was kicking him just as hard (more gross than violent). Maybe was one of those birthday beatings (I witnessed those on multiple occasions and they can look even worse than this). They even had the restraint to say alright stop it that’s enough. Second video, a boy got thrown into the shallow end of the pool. Now of course, if it were my kids I’d be mad. More mad at the fact that they playing way too much; next thing the boy had his phone in his pocket or got sick? Now you putting me in expense. But honestly I wouldn’t call this bullying JUST YET!!!"

Akeem Cooke: "Steuppss a generation of females yall tryin to raise ...all i see is rough play ...boys will b boys."

Richie Richardson: "Cause uh see the boi on the desk with the unbuttoned shirt he was the one pushed in the pool into the pool and he was also involved with the beating of the other boi it was just games."

Education Minister Anthony Garcia has called for the enforcement of smartphone bans in schools so as to prevent videos such as these from reaching the public.

Loop News has reached out to the Education Ministry for comment.