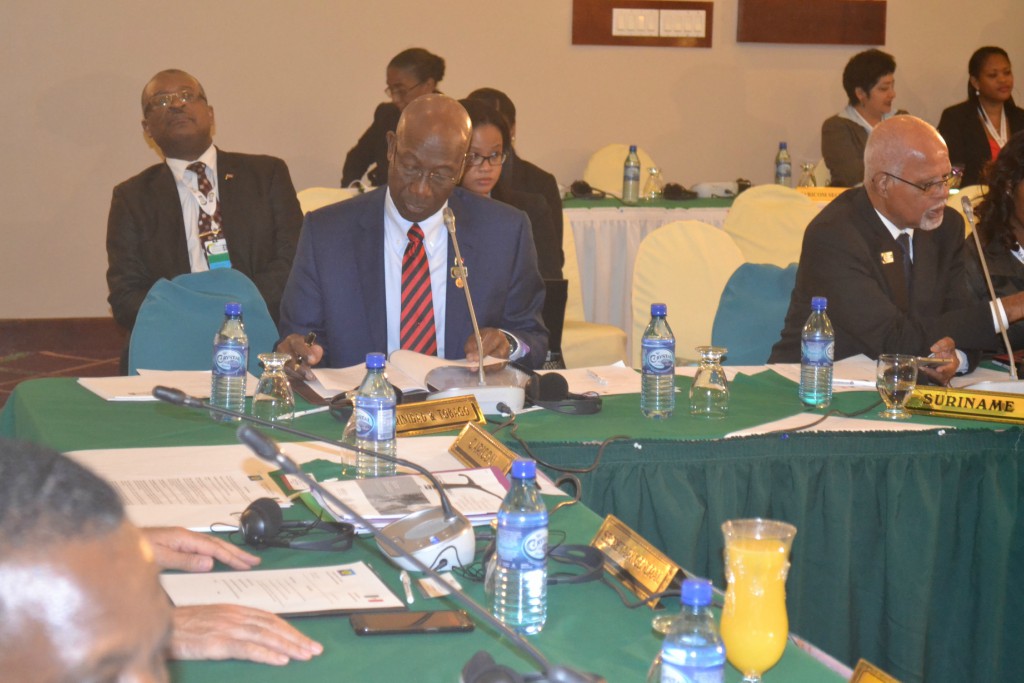 Prime Minister Dr Keith Rowley has asked Mexican President Pena Nieto to immediately consider the development and implementation of a partial scope trade agreement which will allow manufactured goods from Trinidad and Tobago access to the Mexican market.

The Prime Minister made the request during deliberations at the IV CARICOM-Mexico Summit at the Best Western Biltmore Hotel in Belize City, Belize.

Dr Rowley said, “On behalf of CARICOM I want to ask in your renegotiations of North American Free Trade Agreement (NAFTA) to create any avenue to facilitate the movement of our goods into your market. We already enjoy a similar agreement with Costa Rica and Panama and we are hoping to finalize with Chile soon. In a matter of months I hope that our Foreign Ministers might be able to address these issues and finalize a partial scope agreement”.

Dr Rowley expressed confidence that such an agreement would be met with support from his CARICOM colleagues.

During the opening ceremony of the summit, the Mexican government announced that it will extend a financial grant in the sum of USD $5 million each to Antigua and Barbuda and Dominica for infrastructure reconstruction efforts in the aftermath of Hurricanes Maria and Irma.

This will include strengthening projects under the Caribbean Platform of Territorial Information for Disaster Prevention (PITCA) and the United Nations Committee of Experts on Global Geospatial Information Management (UN-GGIM).He also pledged to cooperate with CARICOM to advocate for the Caribbean in multilateral forums.

Earlier in the day a meeting of Foreign Ministers and Mexico focused primarily on disaster risk management and the immediate needs of the affected CARICOM Member States. Proposed future collaboration under the Seventh CARICOM-Mexico Technical Cooperation Programme (2017-2019), which will establish a new paradigm for cooperation and focus on the areas of health, statistics, ICTs and de-risking, in line with the regional priorities set out in CARICOM’s Strategic Plan 2015-2019 and the global development agenda also formed part of the discussions.

As the Summit is drawing to a close, a Joint Communique is currently being finalised for release.

Dr Rowley returns to Trinidad and Tobago on Thursday and will address the media at a press conference to be held at the VIP Lounge of the Piarco International Airport.