PM paints picture of chaos and corruption at Port 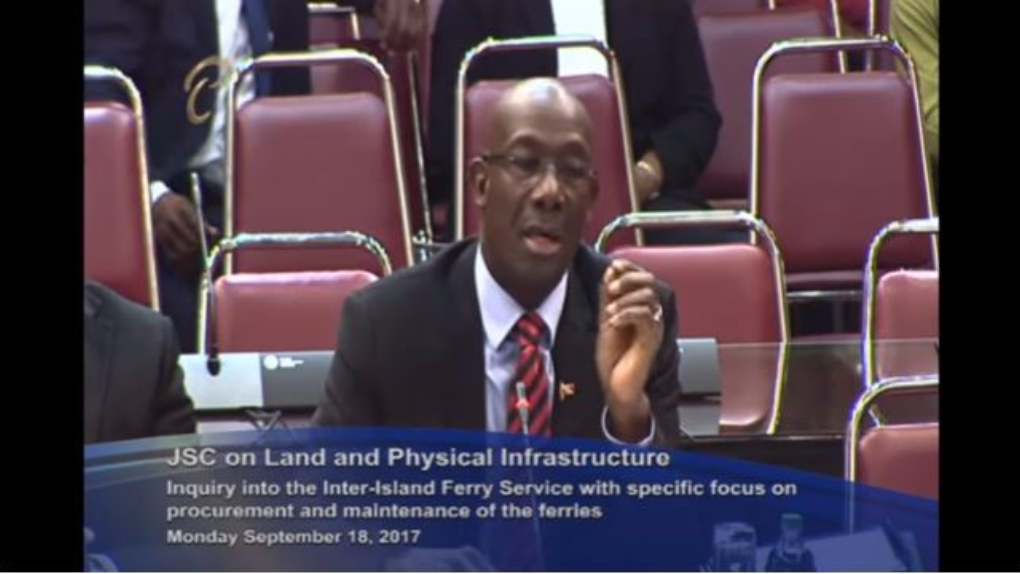 Prime Minister Dr Keith Rowley has slammed the Port of Port of Spain, labeling it a haven for corrupt practices.

Dr Rowley was speaking at Monday’s Joint Select Committee meeting on Land and Physical Infrastructure, with regard to the inquiry into the inter-island ferry service with specific focus on the procurement and maintenance of the ferries.

The Prime Minister addressed the issue surrounding the sea bridge woes which have been ongoing since the departure of the Super Fast Galicia on April 14.

He expressed his dissatisfaction with the manner in which the Port has handled its operations and procurement practices.

"The Minister who I appointed and gave him specific instruction to go down into that den of inequity and clean it up, he came to the Parliament and he was the first person to advise the country through the Parliament, what happened with the procurement process of the Galicia and the role played by Nyree Alfonso, the Port’s lawyer. I expected the pushback from the Port because the Port is a place of conflict and inequity where the taxpayer gets the rough end of it."

“The way the Port has conducted its business, it has given license to people like that to determine that they will determine that there will be no tendering on the Port. That is an untenable state of affairs.”

Dr Rowley also remained adamant that his regime will not be blackmailed to continue corrupt practices.

He said those responsible for the procurement of the vessels to man the sea bridge attempted to hustle the Government out of $50 million dollars for a five-year period, without tendering.

He said because the Government refused, the relevant parties opted to place a heavy burden on T&T's sea bridge.

“The expectation was that the Government facing that situation would have had no choice but to give without tender, a contract for five years’, worth a quarter billion dollars. That is what we were facing and that is what we decided was unacceptable from a procurement standpoint and the Government of Trinidad and Tobago is not going to be blackmailed by any service provider who sneak in through the back door as an agent in the first place and then has the unmitigated gall to come to another Government and say; if I don’t get five years to buy the boat to be here for the rest of my life, I will disrupt the country,” he said.

The Prime Minister called on the Joint Select Committee to find the parties responsible for the corruption with regard to the tendering process.

"I implore this committee to put an end to this. The same way this committee is convening, is breaking new ground in this country. It will break new ground if it holds people accountable, not just by getting a head, but by getting the individuals who have made a career of this and I dear say, the Port is not the only place in Trinidad and Tobago, where this is going on."

Dr Rowley also noted that calls to fire Works and Transport Minister Rohan Sinanan were unfair, as the Minister was asked by him, to address the issues plaguing the sea bridge.

Meanwhile, Dr Rowley said he sent the report he received by Businessman Chrisitan Mouttet, to the Parliament. Mouttet was selected to conduct a one-month investigation into the ferry fiasco. Dr Rowley received the report last Thursday. In a TV6 interview, the Prime Minister said he was deeply disturbed by Mouttet's findings.

He said he sent the report to the Parliament which he expects would be brought before the committee. According to Dr Rowley, the report is "a compendium of the documents," which would also be sent to the Attorney General’s office for legal consideration. He said he plans to make the report public so that the citizenry would make decisions in their own interest.

The Port Authority of Trinidad and Tobago is currently searching for a new ferry.

T&T's sea bridge is being manned by the passenger vessel the T&T Express, and the cargo vessel the Cabo Star. Meanwhile, the T&T Spirit is dry docked for repairs and maintenance works.

Bridgemans says media reports on its company were "destructive"