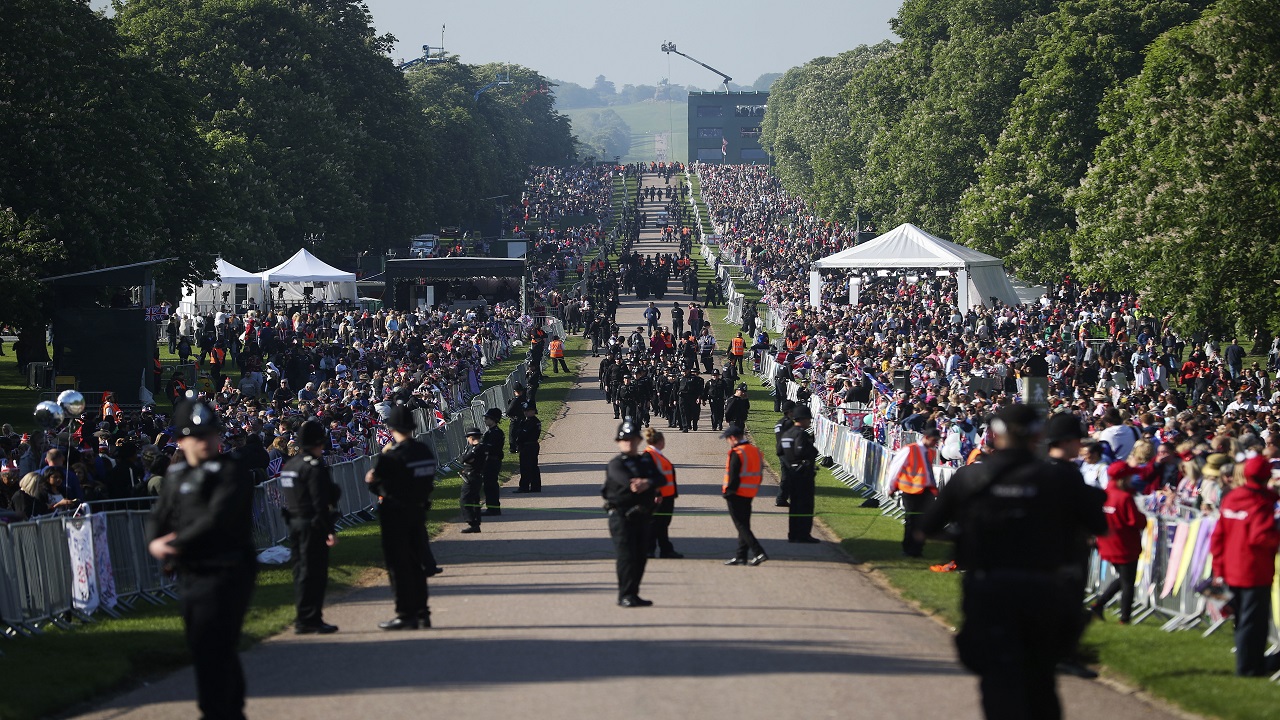 Royal fans gather on the Long Walk outside Windsor Castle ahead of the wedding ceremony of Prince Harry and Meghan Markle at St. George's Chapel in Windsor Castle in Windsor, near London, England, Saturday, May 19, 2018.

The Latest on the royal wedding (all times local):

The American actress' ring has been made with Welsh gold given by Queen Elizabeth II. The company also made her engagement ring.

Prince Harry's ring is a platinum band with a textured finish.

Prince William will carry the rings into St George's Chapel on Saturday.

St. George's Chapel has been given an overnight makeover with flower arrangements at the main entry door and inside the great room where Prince Harry and Meghan Markle will wed.

A cascading hedgerow style using native flowers and foliage graces the entryway. A similar display was inside.

Senior chapel official Charlotte Manley said the flowers were put in overnight while other decorations were put in place in recent days.

She said Markle helped choose the plants but has not seen them in place. That will happen when she arrives to be wed.

The chapel was filled with light from the extensive stain glass window on a bright sunny morning as guests started to arrive.

Oprah Winfrey and Idris Elba are among the first guests to arrive at Windsor Castle for the wedding of Prince Harry and Meghan Markle.

The American talk-show titan and the London-born Hollywood star are among celebrities, royalty, athletes and family friends in the 600-strong congregation invited to St. George's Chapel in Windsor.

Singer James Blunt has also arrived Saturday at the gothic chapel, where the wedding will start at noon (1100GMT).

Royal fans have come from near and far for a glimpse of Prince Harry and Meghan Markle on their wedding day in Windsor.

Hundreds camped out overnight to get a prime spot outside for the newlyweds' horse-drawn carriage near Windsor Castle after the ceremony.

"I woke up wet, and I'm freezing cold, my back is sore, and I just want to go to bed," said Bernadette Christie, a Canadian from Grand Prairie, Alberta.

"I'm here for that 10 seconds when that coach goes around the corner," she said. "It'll be well worth it."

Farkahanda Ahmed came with her mother and a friend from Slough, a few miles from Windsor, arriving at 4 a.m. to get a good spot. The trio wore Union Jack hijabs in honor of the occasion.

"It's a proud moment for us — times are changing," Ahmed said. "Who would have thought a Hollywood actress would become a British princess?

"We are proud to be British and we wanted to come here and show our support."

The members of the public selected for prime viewing spots for the royal wedding have started arriving.

Alan Scott was one of the first arrivals among the roughly 2,600 people invited to watch the procession from the grounds of Windsor Castle. He was invited because of his 45 years of service to scouting, an activity that enjoys much royal family support.

He will have a front row view of the wedding procession and hoped for a good chance to see Prince Harry and Meghan Markle after the ceremony.

The 69-year-old Scott had come in from Lincolnshire the night before for the big event.

"It's a great honor," he said of the unexpected invite. "The atmosphere is great. The royals are great supporters of everything and the young element is really coming through. I think they're going to take things forward."

Royal watchers have swarmed the first trains from London to Windsor as they headed for the wedding of Prince Harry and American actress Meghan Markle.

At the station in Slough, the changing point for travelers from London, revelers found sign boards reading "All aboard the royal wedding special to Harry & Meghan Central."

Many of those on the standing room only trains were Americans, including Christine Clancy from Virginia.

Clancy says she's "always been a royal fan — not an extreme one — I just love British history and love the royals. I just wanted to be part of the wedding celebration."

Irene Bowdry, a lawyer from California, booked her trip with four friends as soon as the date was announced. She said "an American in the royal family, isn't that so exciting?"

Queen Elizabeth II has conferred a dukedom on Prince Harry — making him the Duke of Sussex, Earl of Dumbarton and Baron Kilkeel.

The new title will mean that when Harry marries American actress Meghan Markle later Saturday in Windsor, she will become the Duchess of Sussex.

The secondary titles are for use in Scotland and Northern Ireland.

The monarch similarly bestowed titles on the Duke and Duchess of Cambridge before their wedding in 2011.

Thousands of people are on the streets outside Windsor Castle after many of them camped overnight to grab the best spots to catch a glimpse of Prince Harry and Meghan Markle on their wedding day.

It was the fourth night sleeping rough for Canadian royal-watcher Bernadette Christie, who says it will be well worth it if she sees the royal couple pass by in their state carriage.

Christie says, "I'm freezing cold, my back is sore, and I just want to go to bed."

But she is unrepentant. She says "I'm here for that ten seconds when the coach comes around the corner."

Police and security marshals are out in force to ensure the safety of the tens of thousands of people expected to converge on Windsor during the day.

The big day is finally here: Prince Harry and Meghan Markle are to wed at St. George's Chapel on the grounds of Windsor Castle.

It all started with a blind date two years ago that went very, very well.

That has turned into a global mega-event Saturday that is helping reshape the British monarchy and will be watched by tens of millions of TV viewers around the world.

Royal wedding: How Harry and Meghan fell in love