Russian prime minister warns US against ramping up sanctions 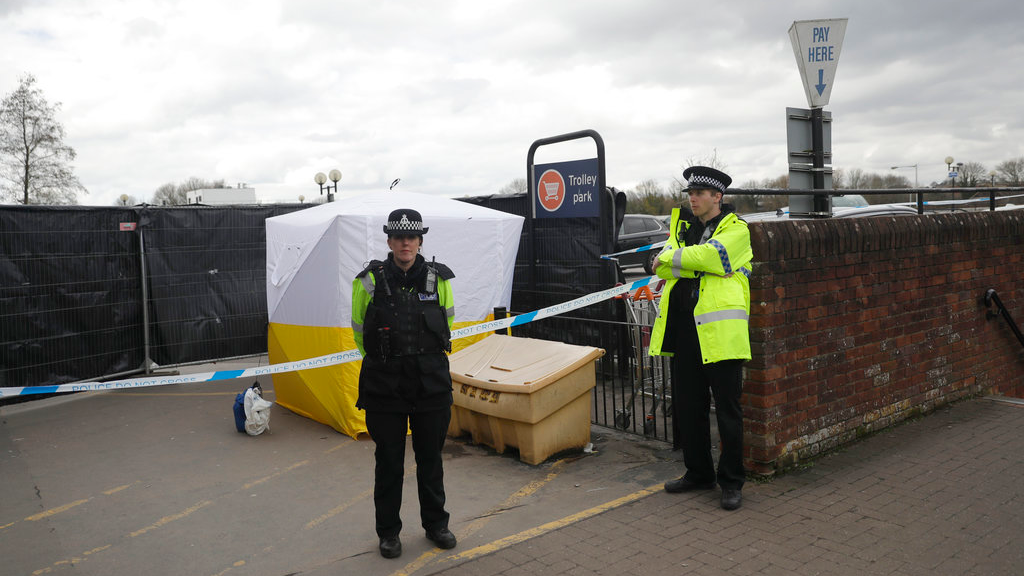 FILE - In this March 13, 2018, file photo, police officers guard a cordon around a police tent covering a supermarket car park pay machine near the spot where former Russian spy Sergei Skripal and his daughter were found critically ill following exposure to the Russian-developed nerve agent Novichok in Salisbury, England. The United States will impose sanctions on Russia for the country’s use of a nerve agent in an assassination attempt on a former Russian spy and his daughter. (AP Photo/Matt Dunham, File)

Russia's prime minister sternly warned the United States on Friday against ramping up sanctions, saying that Moscow will retaliate with economic, political and unspecified "other" means.

The tough message from Dmitry Medvedev marked what the Kremlin sees as a red line, reflecting a growing dismay with the new U.S. sanctions that already has sent the Russian ruble plummeting to its lowest level in two years.

The U.S. State Department said Wednesday that Washington made the determination this week that Moscow had used the Novichok nerve agent to poison ex-Russian spy Sergei Skripal and his daughter in the British city of Salisbury and that sanctions would follow later this month. Russia has strongly denied involvement in the poisoning.

According to the State Department, those sanctions will include the presumed denial of export licenses for Russia to purchase many items with national security implications.

New sanctions proposals in U.S. Congress include legislation targeting Russia's state-controlled banks and freezing their operations in dollars — a move that would deal a heavy blow to the Russian economy.

Medvedev warned the U.S. that such a move would cross a red line.

"If something like a ban on bank operations or currency use follows, it will amount to a declaration of economic war," he said. "And it will warrant a response with economic means, political means and, if necessary, other means. Our American friends should understand that."

Medvedev's tough tone was in stark contrast with past statements by President Vladimir Putin and his lieutenants, who have taken a nonchalant posture while talking about U.S. and other Western sanctions, seeking to downplay their impact on the Russian economy.

The announcement of new U.S. sanctions has rattled the Russian currency and stock markets. The ruble plummeted to its lowest level since August 2016 in early trading Friday.

Russia-U.S. ties have sunk to their lowest level since the Cold War times amid tensions over Ukraine, the war in Syria and the allegations of Russian meddling in the 2016 U.S. presidential election.

Medvedev said that while the U.S. says that the sanctions are intended to punish Russia's "bad" behavior, their real goal is to sideline a rival.

"It's intended to remove Russia as a strong competitor on the international arena," he said.

Medvedev pointed at U.S. efforts to block the planned construction of a new Russian natural gas pipeline to Germany in order to encourage the sales of American liquefied natural gas to Europe as an example of "unfair competition."

US sanctions 19 Russians for election meddling