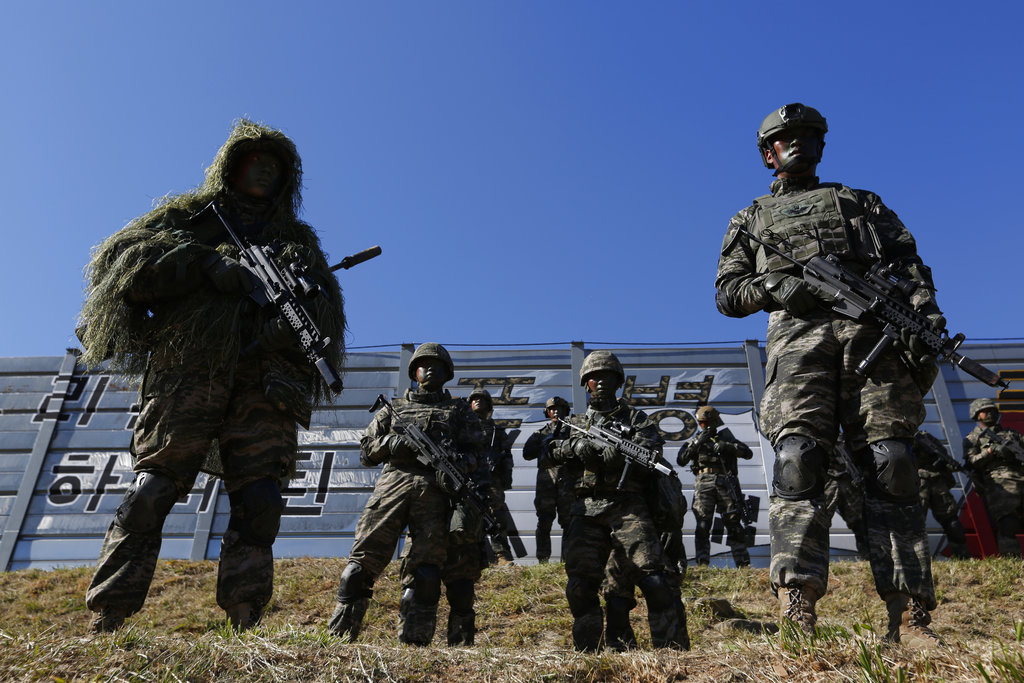 Moon said in a speech to parliament that a second North Korea-U.S. summit is also "near at hand" and that Chinese President Xi Jinping is expected to visit North Korea soon. Moon also said he expects Kim to visit Russia soon and that Kim may meet with Japanese Prime Minister Shinzo Abe.

Moon has previously said that Kim told him he would visit Seoul within this year when the leaders met in Pyongyang, North Korea's capital, in September.

South Korea's presidential office said it had nothing to add to Moon's speech about Kim's trip. His comments were in line with previous statements, it said. They suggest that Moon is determined to push ahead with diplomacy to resolve the nuclear issue.

"Now, based on firm trust among one another, South and North Korea and the United States will achieve complete denuclearization and lasting peace on the Korean Peninsula," Moon said. "This is an opportunity that has come like a miracle. It's something that we should never miss."

The prospects for a second summit between Kim and U.S. President Donald Trump improved after Secretary of State Mike Pompeo made his fourth visit to North Korea earlier this month. But no breakthrough has followed. U.S. officials have recently said a second Trump-Kim summit will likely happen early next year. Some experts have raised doubts over whether Kim's Seoul trip will occur by December.

Moon, a liberal who took office last year, favors a negotiated resolution to the decades-long international standoff over North Korea's nuclear ambitions. He has facilitated a series of high-level U.S.-North Korea exchanges, including their first summit in Singapore in June.

But Moon has faced growing outside skepticism over whether his engagement policy will eventually settle the nuclear standoff. Many conservatives in South Korea and the United States say North Korea has no intention of fully giving up its nuclear program and only wants to buy time to perfect its weapons.

Since entering nuclear talks earlier this year, North Korea has halted nuclear and missile tests and dismantled its nuclear testing site. The United States suspended some annual military drills with South Korea, but is reluctant to provide North Korea with big political or economic benefits unless it takes more serious disarmament steps.

The two Korea have also been taking steps to reduce conventional military threats along their border as part of deals struck during an inter-Korean summit in September. Seoul officials said the rivals on Thursday put covers on their naval and coastal artillery guns and closed gun ports along their disputed western sea boundary, the scene of several bloody maritime skirmishes between the countries in recent years.

South Korea's military said the two Koreas halted all hostile acts against each other along the land, sea and aerial boundaries as of Thursday. The Koreas have already removed weapons from a shared border village and have begun clearing mines at another border area where they plan their first searches for Korean War dead.

The two Koreas have remained split along the world's most heavily fortified border since the three-year Korean War ended in 1953 with an armistice, not a peace treaty. If Kim, a third-generation hereditary ruler, visits Seoul, he would be the first North Korean leader to do so since the war's end. Last year saw increased fears of a new war on the peninsula as he exchanged threats of destruction and crude insults with Trump over North Korea's push to develop nuclear missiles capable of striking the U.S. mainland.