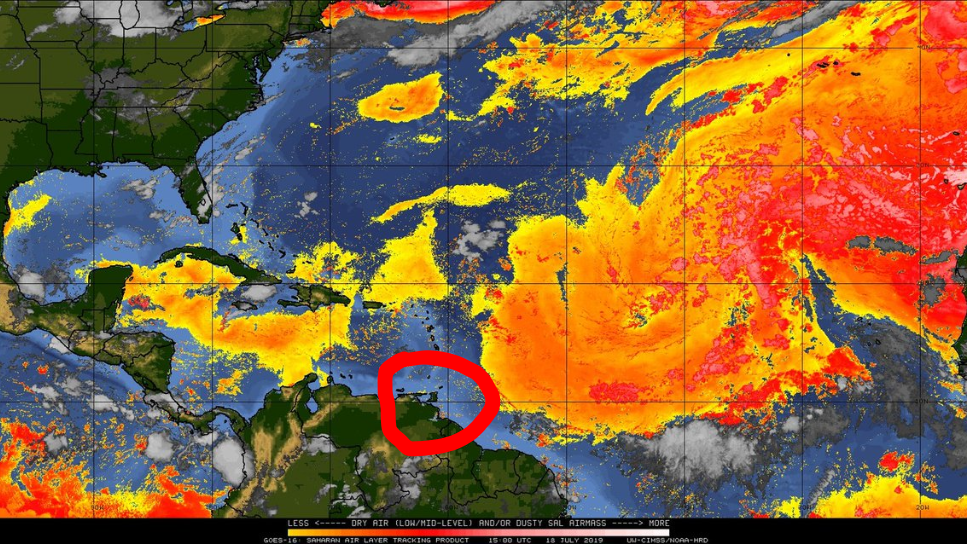 After the recent passage of a tropical wave, Saharan dust is once again making a comeback.

The Trinidad and Tobago Meteorological Service is again warning the public of an increase in dusty conditions from Friday, July 19, 2019.

In an update shared to social media, the Met Office said the heightened dusty conditions would continue into the weekend.

The Met Office said, however, that relief is in sight.

"An increased presence of Saharan dust is expected through the weekend, but the highest concentrations are likely tomorrow. Please be advised accordingly."

"Good news: Apart from this event and a brief one next week (24th - 25th), the presence of Saharan dust is expected to be minimal through to the end of July."

"Nb. The attached image is just to show the proximity of the dust event. The extent seen, is not the actual extent of a single dust event, but rather a combination of areas of dryer air, and smaller dust plumes. For a brief explanation of the product: https://bit.ly/30DusUf."

People with dust-related health conditions are advised to limit their exposure and to have their medication handy.

Have you experienced dust-related health issues? Share your comments below.

About the Saharan Air Layer (SAL)

The remainder settles out into the ocean or washes out of the air with rainfall. Scientists think that the July 2000 measurements made in Puerto Rico, nearly 8 million tonnes, equalled about one-fifth of the total year's dust deposits.

The SAL passes over the Canary Islands where the phenomenon is named "Calima" and manifests as a fog that reduces visibility and deposits a layer of dust over everything.

These clouds of dust are visible in satellite photos as a milky white to grey shade, similar to haze.

Findings to date indicate that the iron-rich dust particles that often occur within the SAL reflect solar radiation, thus cooling the atmosphere. The particles also reduce the amount of sunlight reaching the ocean, thus reducing the amount of heating of the ocean.

They also tend to increase condensation as they drift into the marine layer below, but not precipitation as the drops formed are too small to fall and tend not to readily coalesce.

These tiny drops are subsequently more easily evaporated as they move into drier air laterally or dry air mixes down from the SAL aloft. Research on aerosols also shows that the presence of small particles in air tends to suppress winds.

The SAL has also been observed to suppress the development and intensifying of tropical cyclones, which may be related directly to these factors.

The SAL is a subject of ongoing study and research.