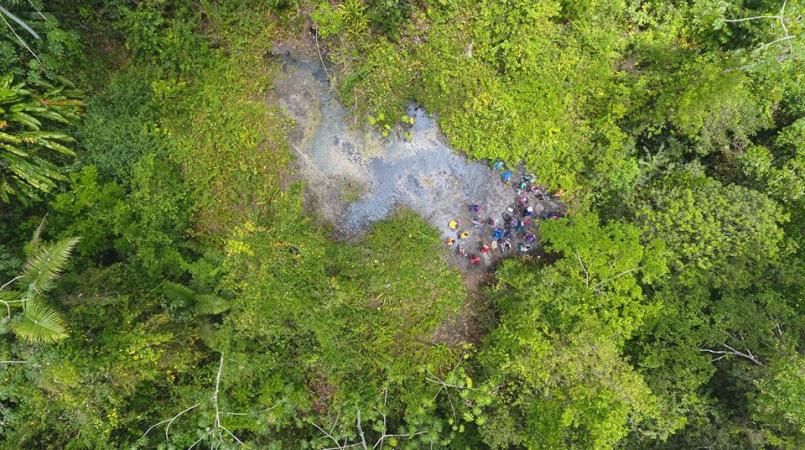 The existence of Trinidad and Tobago’s only salt water volcano has been confirmed in the forest off Guyaguayare Road, Rio Claro.

On Saturday 15 April, a team of 37 geoscientists and guides visited the geological phenomenon.

A release from the Mayaro Rio Claro Regional Corporation says that in 1959, Dr Hans Kugler recorded this feature as a salt spring in his work Surface Geology Map of Trinidad. A mixture of water and a tar-like substance can reportedly be seen bubbling and flowing within the crater.

The salinity or salt water concentration of sea water is around 3.5 percent, and the water found within the crater is said to be at a maximum of 2.3 percent, based on the figures provided by the local chapter of American Association of Petroleum Geologists Young Professionals, who were present on the trip.

Over the years, a terrace covered with a coral-like formation known as “tufa” formed below the crater of the volcano, which plunges around 250 feet downhill to meet the salt water river in the area, which is devoid of vegetation.

Persons wishing to visit the volcano are strongly advised not to attempt the hike without a knowledgeable guide. The crater is located in a southwesterly direction from a start point near the Salt Water Bridge on the Guyaguyare Road.