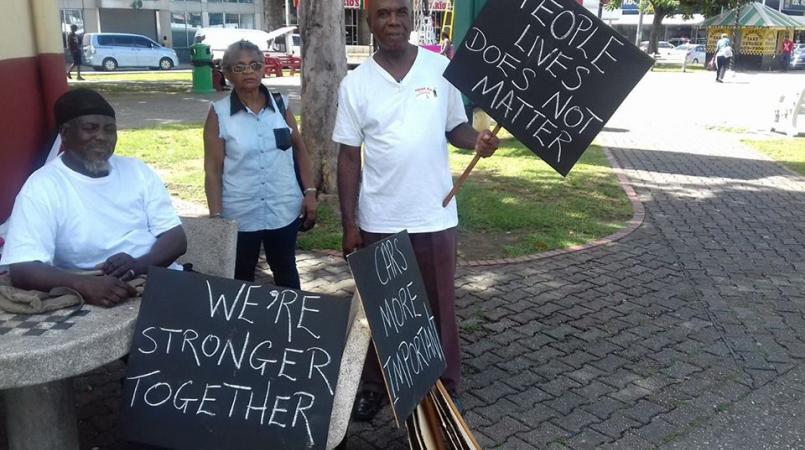 Vendors who previously occupied the Salvatori site at Independence Square in Port of Spain are protesting the use of the site as a car park.

A small group of vendors, represented by the “Think All Organization” gathered on the Brian Lara Promenade today and claimed they had been lied to by the Port of Spain City Corporation.

They said when they were given notice by the Corporation to leave the site, they were told that it was because the owner of the site was ready to move forward with development plans.

The site is owned by the Urban Development Company of Trinidad and Tobago (UDeCOTT).

However, the vendors say they were surprised to see no construction work taking place and the site being used as a car park.

They are now accusing the Corporation, UDeCOTT and the government of giving cars priority over people.

Spokesperson Steve Fletcher said when the vendors were first given permission to occupy the site under former mayor Louis Lee-Sing, they were told they would have to vacate the premises when UDeCOTT was ready to build.

“We agreed to that and we assured them,” Fletcher said. “For some reason now, we don’t know what is causing the gameplay.”

He said under previous mayor Raymond Tim Kee, several attempts were made to remove the vendors from the site and they were promised alternative accommodations would be made for them.

Tim Kee has said in the past that vending on the site was meant as a seasonal arrangement and not intended to be permanent.

Fletcher, however, said the alternative accommodations provided were insufficient and impacting negatively on sales.

“They lying to us. All the places they say they getting to help us to make sure we have somewhere to go is failure.”

Fletcher said he was advising women to make a car instead of a child as it seems as though cars are more valuable than people.

“Cars are better than humans,” he said. “That is the situation we dealing with right now.”

Noting that the vendors themselves also operated a car park on the site, Fletcher said it was much cheaper than the rates being charged now.

He said the vendors were receiving help from former housing minister Marlene Mc Donald but since the ministry changed hands they have not heard from her or her replacement Randall Mitchell.

Carl Daniel, President of the Think All Organisation, said what is being done to the vendors is an injustice.

“I was insisting that the vendors not be moved until they ready to build. But their intention was always to put a parking lot and throw these people out into the streets,” he said.

He said Udecott must explain why the vendors were removed if they were not yet ready to build on the site.

“The vendors were making an honest dollar to feed their children and pay their rent,” he said. “And they moved them to put a car park.”

Another vendor said she was having a hard time making ends meet since being made to leave the site. She said it was the government’s responsibility to provide appropriate accommodations so vendors can ply their trade.