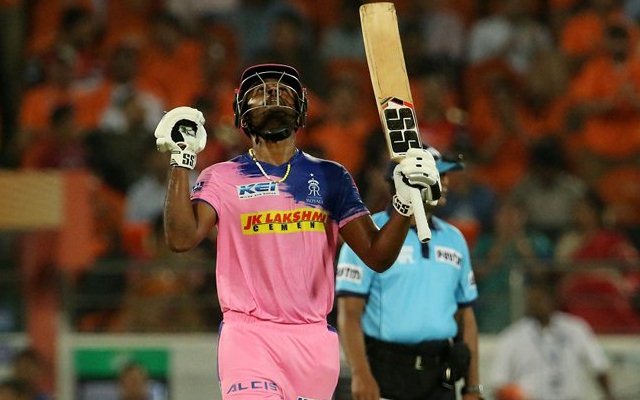 Sanju Sampson scored 85 for the Rajasthan Royals as they chased down an IPL record 224 for victory in Match 9 of the 2020 IPL. (Photo source: Twitter)

Sanju Sampson hit 85 as the Rajasthan Royals chased down a record 224 to beat the Kings XI Punjab in a thrilling run-fest at Sharjah in Match 9 of the 2020 Indian Premier League.

Set 224 for victory, Steve Smith (50) and Sampson put on 81 for the second wicket before Sampson and Rahul Tewatia (53) cashed in on 61 for the third wicket to keep the Royals in the hunt up to the 17th over.

Needing 51 off 18 deliveries, Tewatia swatted Sheldon Cottrell for five sixes in the 18th over to reduce the deficit to 21 needed off 12 balls.

Jofra Archer (13 not out) hit two sixes and Tom Curran (4 not out) a boundary in the last over as Rajasthan won by four wickets with three balls to spare.

Earlier, KL Rahul (69) and Mayank Agarwal (106) put on 183 for the first wicket, the third highest opening stand in IPL history as the Kings Xi Punjab put up a mammoth 223/2.

Nicholas Pooran hit 25 not out off eight balls with three sixes in a losing cause.

His team-mate, Cottrell, went for 22 of his first two overs before going for 30 off his third, ending with figures of 1/52.

The Royals are now second in the IPL table behind the Delhi Capitals, both with four points, but separated by net run rate.

Kings XI stay in third place, and are next in action on October 1 against the Mumbai Indians in Abu Dhabi.

The Royals' next assignment is against the Kolkata Knight Riders on September 30 at Dubai.

Match 10 of the 2020 IPL features the struggling Royal Challengers Bangalore against the Mumbai Indians at Dubai.

No Bravo again as Super Kings lose to the Royals