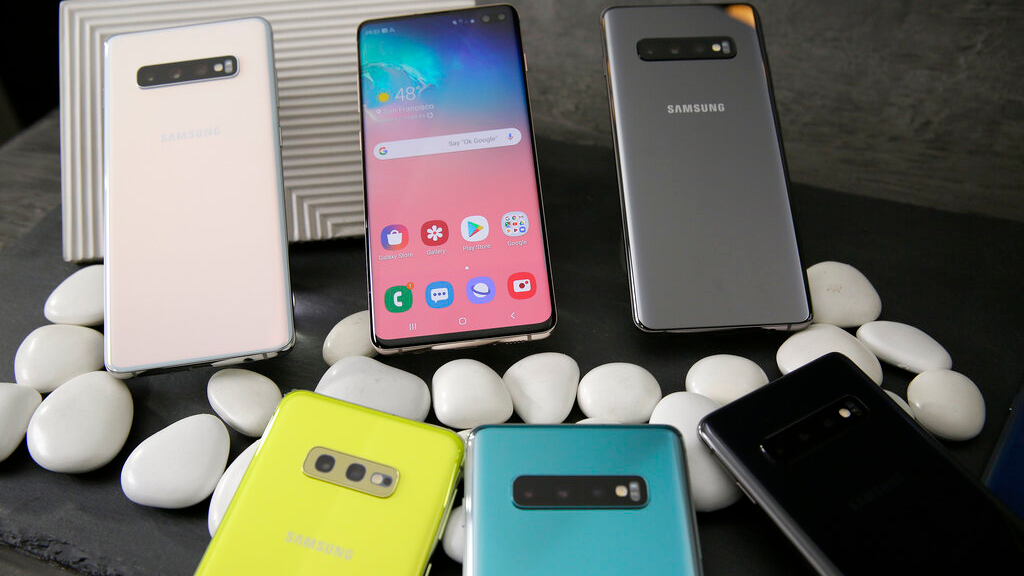 In this Tuesday, Feb. 19, 2019, photo are a selection of the new Samsung Galaxy S10 smartphones during a product preview in San Francisco. (AP Photo/Eric Risberg)

The Latest on Samsung's new-phone announcement (all times local):

Samsung has unveiled a highly anticipated smartphone with a foldable screen that breaks new ground in a market that has been stuck in an innovative funk.

The phone announced Wednesday in San Francisco will be called the Galaxy Fold and will sell for $1,980 when it is released April 26.

Consumers willing to pay that hefty price will get a device that can unfold like a wallet so it can work like a traditional smartphone with a 4.6 inch screen or morph into something more like a mini-tablet with a 7.3 inch screen.

When fully unfolded, the device will be able to simultaneously run three different apps on the screen.

Samsung is hoping the Galaxy Fold will spur more people to upgrade their phones and reverse a recent slump that saw its smartphone sales fall 8 percent last year.

Samsung is hailing the 10th anniversary of its first smartphone with three new models, although they seem unlikely to reverse a sales slump in an industry that has largely been recycling its ideas.

The Galaxy S10 phones unveiled Wednesday boast fancy cameras, sleek screens spanning the front of the devices and at least 128 gigabytes of storage.

Those are all important features to consumers shopping for phones, although they aren't a big leap from the models released during the past few years.

With smartphone innovation in a lull, consumers are holding on to their existing devices for longer periods than they have in the past.

Samsung is promising an S10 model that will have faster wireless speeds and another foldable-screen phone, but those products won't be out until later this year.

Samsung is expected to show off its latest smartphones Wednesday, the latest effort by a phone maker to come up with new features compelling enough to end a sales slump.

The new models expected in San Francisco will commemorate the 10th anniversary of Samsung's first smartphone.

Samsung is also expected to provide a glimpse at a highly anticipated smartphone with a foldable screen.

Apple touted the iPhone's 10th-anniversary edition as a breakthrough when it was released in late 2017. But the iPhone X didn't sell as well as analysts hoped, partly because it carried a $1,000 price tag.

Smartphones made in recent years also haven't made dramatic improvements from earlier models. The lull in innovation has given consumers little incentive to dump their current devices and buy something new.