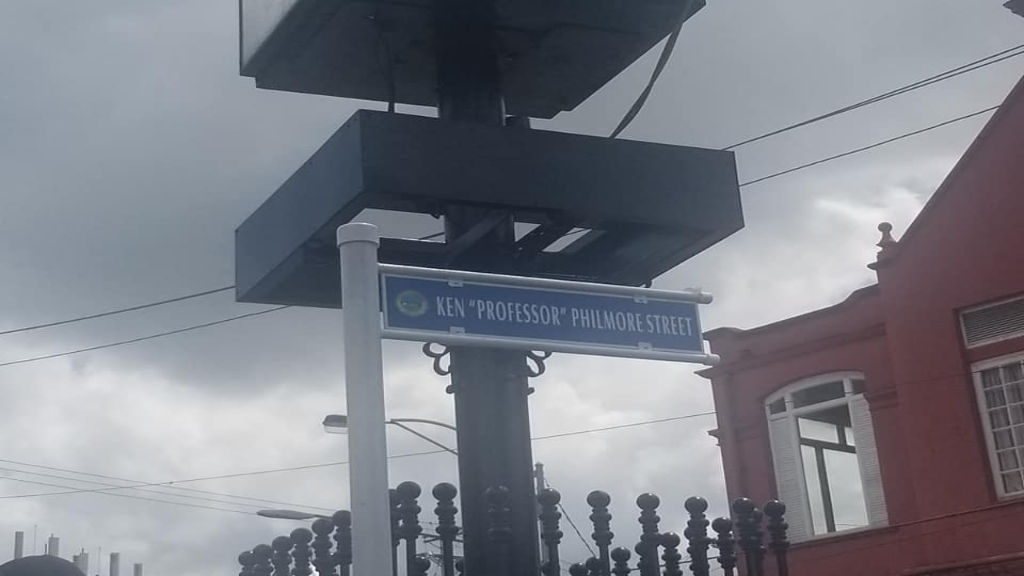 The City of San Fernando has named what may very well be the shortest street in the world after recently deceased pan icon Ken “Professor” Philmore.

The pannist and arranger passed away at the Intensive Care Unit of the San Fernando General Hospital, days after getting into an accident along the Solomon Hochoy Highway in September 2018.

The spanking-new street sign was unveiled following a short ceremony on location on Monday.

The honour was bestowed on Philmore, a San Fernandian, as part of the City’s launch of Cultural Icons Week – which will run from February 19 to February 24.

San Fernando Mayor Junia Regrello said it was fitting that the short street be named after Philmore as Library Corner is the heartbeat of the City.

He noted the possibility that the length of roadway chosen to honour Philmore for his contributions to the City of San Fernando could be the shortest in the world, which would be a further honour to the pannist’s name.

“This is the nexus between Mucurapo Street, Harris Promenade, La Pique Hill, High Street, Pointe-a-Pierre Road and now Ken “Professor” Philmore Street. Somebody said to me but that street is so short, because it is between High Street and Harris Promenade.

And I said there are different ways to look at things, we may very well have to contact the Guinness Book of Records because we may have the shortest street in the world and we will get Ken Philmore’s name out there in another format,” Regrello said.

A number of events and activities are on the itinerary for the week-long observance, including an Exhibition and Public Chat, as well as the Calypso competition.

The Exhibition runs from Tuesday to Friday, then on Sunday from 9 am to 3 pm.

The Calypso Competition will take place from 6 pm on Sunday. Tickets are available at the San Fernando City Corporation.