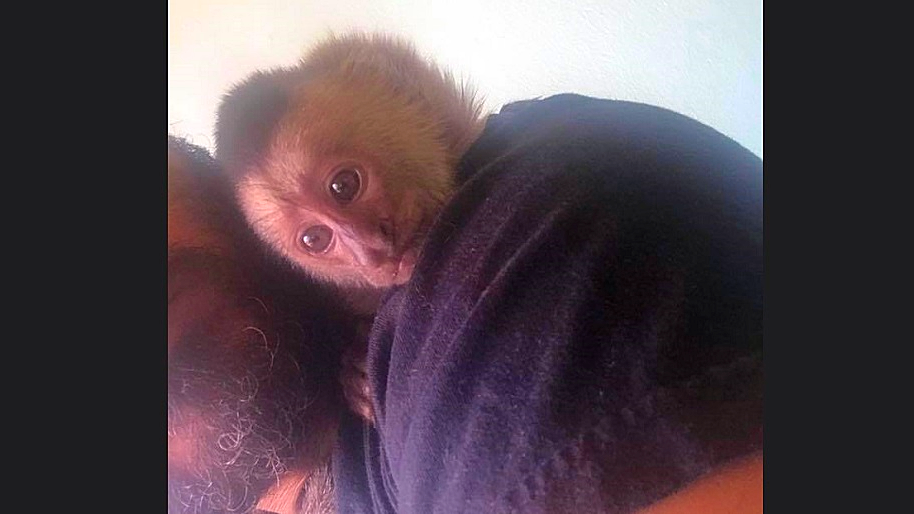 Veterinarian and former temporary senator Dr Kriyaan Singh said a young Capuchin monkey was brought to him after a black market smuggler took the animal to a San Fernando pet store.

San Fernando-based pet store Pet Shop Boys, however, refused to sell the animal but brought it to Singh to be treated.

Singh said Vayu’s mother had likely been killed in order for poachers to grab and sell him.

“Say hello to Vayu…this juvenile Capuchin monkey was found by a person in their garage and taken by the homeowner to Petshop Boys in San Fernando.

“The owners of Petshop Boys who will not sell illegal animals called me to pick it up. He will be kept at the clinic until his wounds are healed and he's properly treated for parasites,” he said.

Singh also commended the pet store for their humane actions.

“I want to commend Pet Shop Boys for being such caring pet owners/store owners and general animal lovers and for doing the right thing and not stooping to the level of other unscrupulous pet shops who'd have sold him to the highest buyer. Also many thanks to the homeowner who took it to them to seek assistance,” he said.

Singh said once the animal is back to full health and is finished with his quarantine period he will be placed in a suitable wildlife sanctuary where he can roam freely.

“I want to remind all that primates are not pets and that these monkeys are intentionally orphaned as the mother is killed to snatch the baby by poachers. Say no to the black market trade in monkeys,” he said.

Singh said citizens who see another animal being traded illegally should not buy the animal to rescue it, but instead report the incident to the Forestry Division or the police, or alternatively bring the animal to the La Romain Veterinary Clinic or their nearest vet if they have found or already acquired it.

“The aim is to cut the demand for illegal pets such as monkeys,” he said.

Controversy over wildlife tourism and selfies in the Amazon