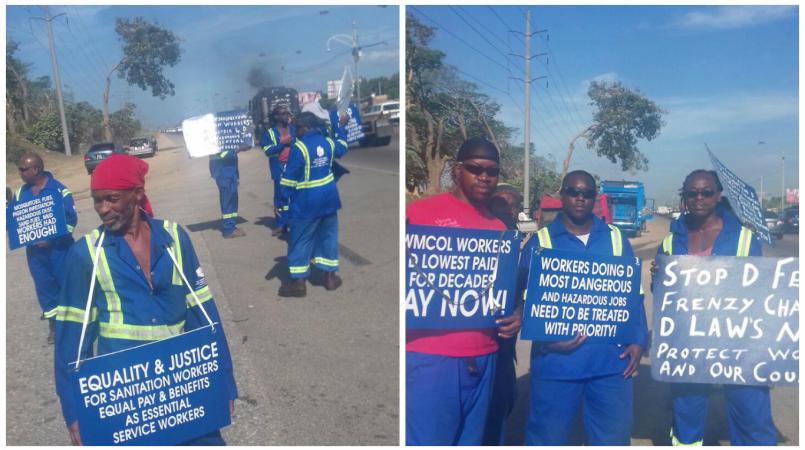 Sanitation workers protested outside of the Beetham landfill on Monday morning, demanding better conditions for workers who are subjected on a daily basis to poisonous fumes and toxic conditions.

Speaking to LoopTT, president of the Industrial General and Sanitation Workers Union (IGSWU), Robert Benacia, said since Public Utilities Minister Fitzgerald Hinds was appointed, he has not met with workers after requests by the union, which he said is a ‘blatant disrespect’.

He says workers are subjected to poisonous chemicals and toxic fumes which, he says, are damaging the health of, not only workers at the dump, but all citizens in the Port of Spain area and environs, and is calling on government to clean up its act.

“We have the indiscriminate dumping of all kinds of poisons, chemicals, mercury, lead, asbestos, you name it, those chemicals are what they inhale every day.”

“These dumps are poisoning the environment, they are poisoning the air, the sea, the mangroves, rivers, wetlands, and the smoke that blows from this affects not only our workers but anything west of this landfill, people in Woodbrook, Westmoorings, Port of Spain, Laventille, everyone.”

“This stems from successive governments disrespecting sanitation workers across the country, it involves the lack of priority for waste management at the dumps, and the failure of government over the years to rehabilitate the landfills is putting our workers at risk.”

“We need government to stop paying lip service that we continue to get from them every time a situation arises.”

He slammed Minister Hinds for his lack of attention on the issue.

“We asked him to visit the site since he came into office so that he could (see) that the conditions are inhumane. We are yet to receive a response from him, apparently workers down here are not important. Sanitation workers are not public servants, they are not part of the whole, we do not exist.”

Ministry ‘dragging its feet’ with back pay

Benacia said it is unacceptable that government is unable to pay workers their back-pay, which they say they have waited years for.

“Last year workers had to protest to get their back pay like everybody else, if we didn’t protest we would not have been paid.”

“Last week Wednesday the Minister of Finance told me that he was only made aware of the situation that apparently the Public Utilities Ministry is dragging its feet in getting whatever documents across to get the money paid, they now have to look to see if it has money to pay us.”

“The kind of mind-games and misinformation…the Ministry previously indicated that workers would receive their back pay like everybody else and would be paid on time. This has not happened.”

He said company officials were also being ‘fed with lies’ as there is no date for payment, and in addition he says workers continue to be treated with disrespect.

“We want the Minister to come down to the site and see the conditions under which we operate, so he can understand why the former minister (Ancil Antoine) said conditions are inhumane. We want funding to rehabilitate the dumps and turn them into proper landfills.”

He says SWMCOL must be given the funding in order to properly rehabilitate the system.

About 250 current and former employees were due back pay for the period 2011-2013. The first tranche was paid in 2016 following an initial protest by workers, and the second tranche was due this year.

Benacia says the government has since only given ‘lip service’ and is now indicating that there is no more money to pay them. He says this is unacceptable.

"We are not on the list of priorities, apparently workers at the landfill are just ‘rubbish-men’, and they just dump rubbish inside of there…and we are saying that must stop.”