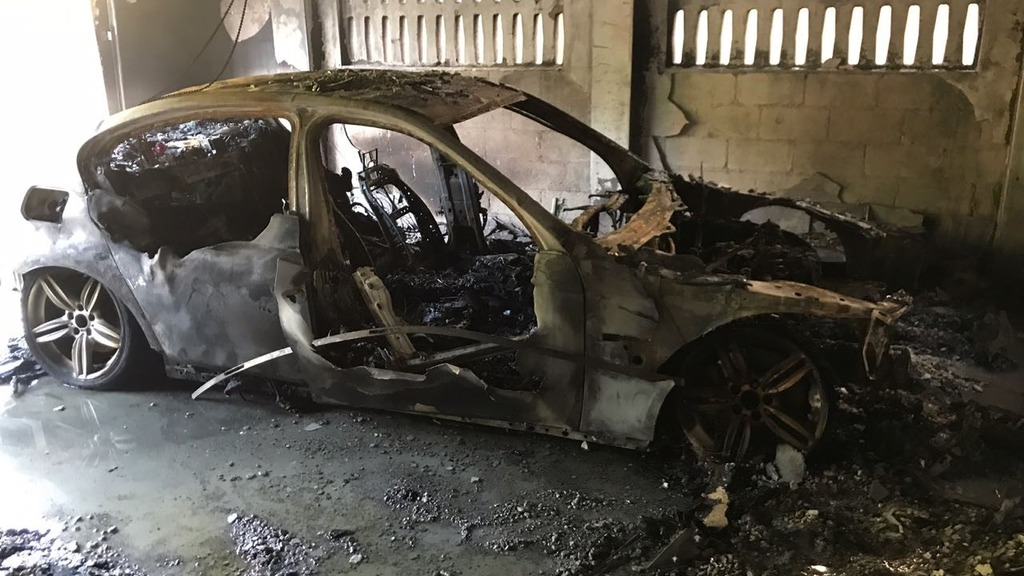 A Santa Cruz man is thankful to be alive today after his BMW car exploded in his garage minutes after he parked it.

The incident took place around 3 am on Sunday morning.

Marcus told Loop that he parked the car, went upstairs to his bedroom and took out his iPad to do some reading when his house was rocked by a loud explosion.

He said when he went downstairs to check he realised the engine of his 2014 528 i 5 series was on fire.

He said he tried to put out the flames with a fire extinguisher and then some water hoses but when that failed he called the fire services which took about 45 minutes to extinguish the fire.

Marcus, who did not purchase his car in Trinidad, said he alerted the importer of his vehicle about the incident and intends to write to BMW headquarters in Germany.

The father of one said he is thankful for many things including that his son was not with him at the time.

The BMW brand was under scrutiny in the past year for exploding cars.

Last year, ABC News reported over 40 instances of parked BMWs in the US spontaneously bursting into flames since 2012. The report said in all of those instances the cars were parked and turned off. The cars ranged from one to 15 years old.

In response to ABC, BMW said that with almost five million BMW vehicles on US roads, such fire incidents are rare, and based on its investigation, “we have not seen any pattern related to quality or component failure. Vehicle fires can result from a wide variety of external reasons unrelated to product defect.”

But just last week, reports stated that BMW is set to recall 324,000 diesel vehicles in Europe from August 20 because of a series of dangerous engine fires in South Korea.

Reports are that between January and July this year, 27 cars caught fire in a series of events that has seen Korean politicians calling for investigations.

The problem was identified as a defect in the exhaust gas recirculation system in models that include the best-selling 520d sedan.

BMW recalling 230K vehicles that may have Takata air bags