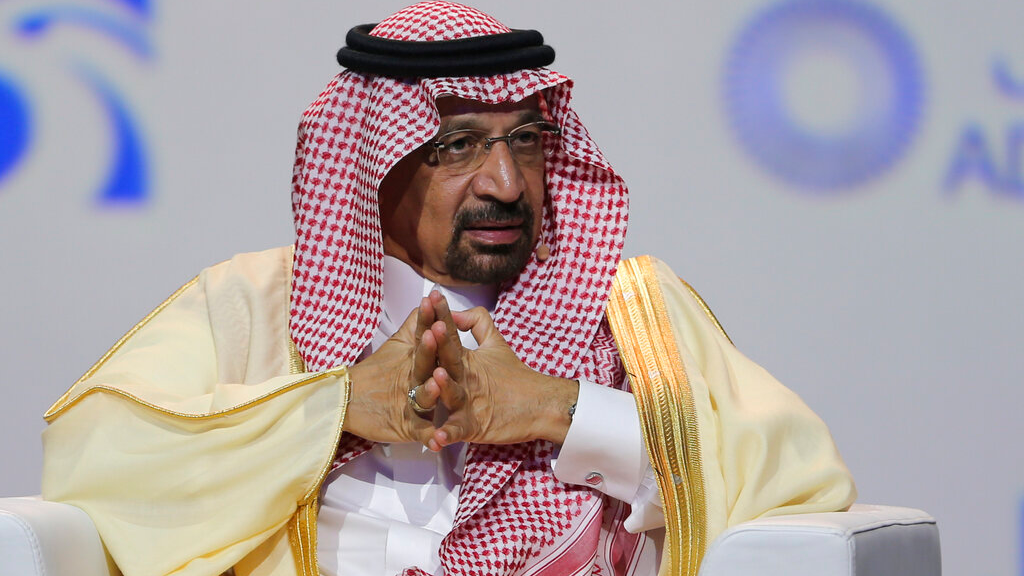 Saudi Arabia's energy minister said Sunday that major oil producers need to do better to narrow swings in prices that dip below $60 a barrel and rise above $86.

"I think what we need to do is narrow the range ... of volatility," Khalid al-Falih said.

"We need to do better and the more producers that work with us, the better we're able" to do so, he told the Atlantic Council's Global Energy Forum in Abu Dhabi.

Cautious not to set a price target or range, he explained there are consequences when oil prices dip too low or rise too high.

Last month, OPEC countries, including Saudi Arabia, and other major oil producers agreed to cut production by 1.2 million barrels a day to reduce oversupply and boost prices for the first six months of 2019.

Oil producers are under pressure to reduce production following a sharp fall in oil prices in recent months because major producers — including the United States — are pumping oil at high rates.

Brent crude, the international standard, traded at $60.48 a barrel in London on Friday. Benchmark U.S. crude stood at $51.59 a barrel in New York.

Analysts say the kingdom needs oil between $75 and $80 a barrel to balance its budget, with spending for this year to reach a record high of $295 billion.

Speaking to reporters on the sidelines of the forum, al-Falih said that despite continued concerns over the volatility in price seen in the fourth quarter of 2018, he is hopeful it can be brought under control.

"I think early signs this year are positive," he said.

Last week, Saudi Arabia announced it has 268.5 billion barrels of proven crude oil reserves, a figure 2.2 billion barrels higher than previously known. The kingdom's Energy Ministry also revised upward the country's gas reserves by around 10 percent, to 325.1 trillion standard cubic feet as of the end of 2017.

The kingdom's oil reserves are among the cheapest in the world to recover at around $4 per barrel.

Al-Falih said the revision, conducted as an independent audit by consultants DeGolyer and MacNaughton, points to why the kingdom believes state-owned oil giant Saudi Aramco "is indeed the world's most valuable company."

He said plans for an initial public offering of shares in Aramco in 2021 remain on track.

Average US gas prices fall 7 cents thanks to crude costs