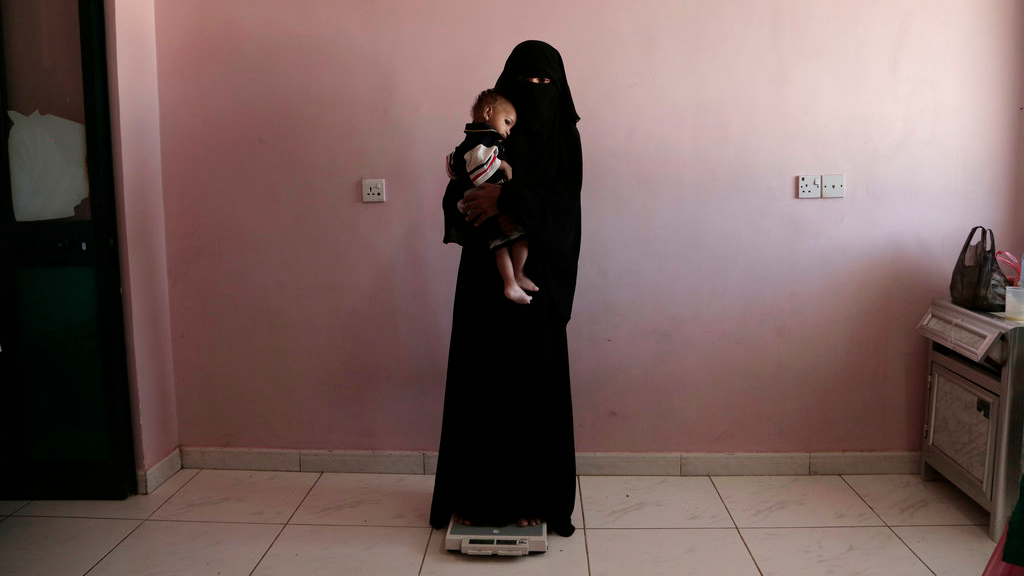 n this Feb. 13, 2018, file photo, Umm Mizrah, a 25-year-old Yemeni woman, holds her son Mizrah on a scale in Al-Sadaqa Hospital in the southern Yemen city of Aden. The woman, who is nearly into the second trimester of her pregnancy, weighed 38 kilograms (84 pounds), severely underweight. Mizrah, who was 17 months old, weighed 5.8 kilograms (12.8 pounds), around half the normal weight for his age. (AP Photo/Nariman El-Mofty, File)

A Saudi-led coalition fighting Shiite Houthi rebels in Yemen said Friday it bombed an air base adjacent to the Sanaa international airport allegedly being used by the rebels to launch drone and ballistic missile attacks.

Turki al-Malki, a spokesman for the coalition, said in TV comments that no flights or international aid efforts at the airport were affected by the airstrikes targeting the al-Dulaimi Air Base in Sanaa. He did not elaborate.

Yemen's rebel-run al-Masirah TV said more than 30 airstrikes by the Saudi-led coalition targeted the air base and surrounding areas in the rebel-held capital.

The airstrikes came days after a U.S. call for an urgent halt to the Saudi-Iran proxy war in Yemen and the start of negotiations in November toward a political settlement of the conflict. The war has pushed millions to the brink of starvation in the Arab world's poorest country.

Secretary of State Mike Pompeo on Tuesday urged a cease-fire, specifically citing missile and drone strikes into Saudi Arabia and the United Arab Emirates from Houthi-controlled areas of Yemen. He also said airstrikes by the Arab coalition, backed by the U.S., "must cease in all populated areas in Yemen."

"The time is now for a cessation of hostilities," Pompeo said. His plea came shortly after Defense Secretary Jim Mattis spoke in unusual detail about diplomacy to end the crisis.

"Yemen has more problems than any people deserve to carry," Mattis said.

The U.S. call comes nearly a month after the slaying of Saudi dissident Jamal Khashoggi in a Saudi Consulate in Turkey causing international outrage against the Saudis. The killing prompted critics to urge an end to American arms sales to the kingdom and a reappraisal of U.S. military support for the Saudi-led Arab coalition that has been bombing Iranian-supported Houthi rebels, sometimes at the expense of killing civilians.

In March 2015, the Saudi-led coalition unleased a full-scale military campaign against Iran-allied Houthi rebels who had captured most of Yemen including the capital, Sanaa, a few months earlier. The rebels pushed the internationally recognized government out of the country.

An estimated 10,000 people have been killed. The war has also left around two-thirds of Yemen's population of 27 million relying on aid, and more than 8 million at risk of starvation.

The humanitarian crisis in Yemen is one of the worst in the world, with three-quarters of the population requiring some form of life-saving assistance and protection, according to the United Nations Population Fund. The agency warned Thursday that the looming famine in war-torn Yemen could put 2 million mothers at risk of death.

UNFPA said lack of food, displacement, poor nutrition, disease outbreaks and eroding health care have dramatically affected the health and well-being of 1.1 million malnourished women who are pregnant or are breast-feeding their newborns.

The U.N. has made no progress in attempts to get the warring sides to negotiate a peaceful resolution to the conflict.