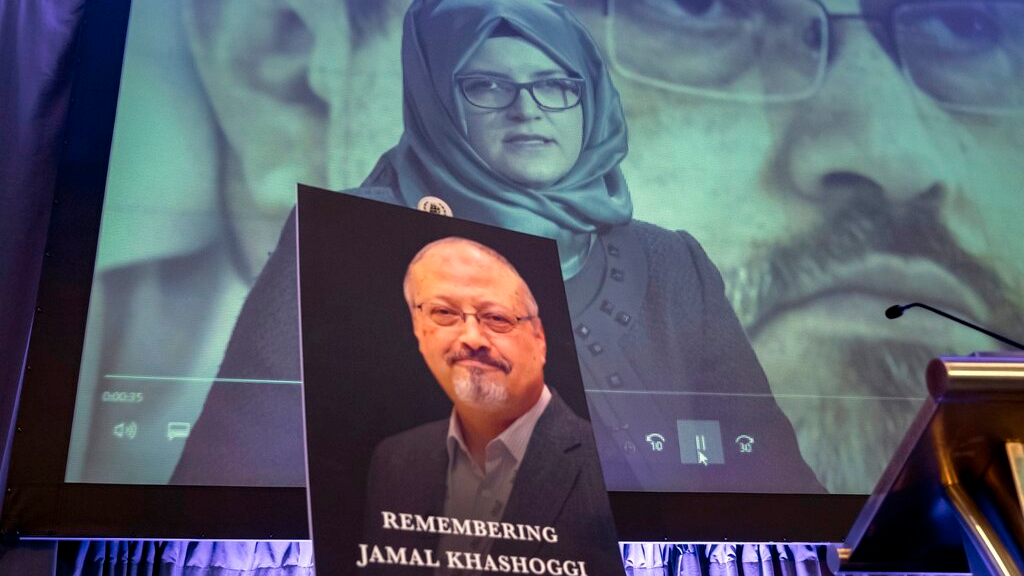 FILE - In this November 2, 2018 file photo, a video image of Hatice Cengiz, fiancee of slain Saudi journalist Jamal Khashoggi, is played during an event to remember Khashoggi, who died inside the Saudi Consulate in Istanbul on October 2, 2018, in Washington. (AP Photo/J. Scott Applewhite, File)

Saudi Arabia sentenced five people to death on Monday for the killing of Washington Post columnist and royal family critic Jamal Khashoggi, who was murdered in the Saudi Consulate in Istanbul last year by a team of Saudi agents.

The killing of Khashoggi stunned the international community and also many Saudi citizens, who were deeply shocked that a Saudi national could be killed by 15 government agents inside one of the kingdom's consulates.

Another three people were sentenced to prison for a combined 24 years, according to a statement read by the attorney general's office on Saudi state TV. No individual breakdown for the sentencing was given.

In total, 11 people were on trial in Saudi Arabia for the killing, but the government has not made their names public. All can appeal the preliminary verdicts.

While the case in Saudi Arabia has largely concluded, questions still linger in the international court of public opinion about Crown Prince Mohammed bin Salman's culpability in the slaying.

Khashoggi had walked into his country's consulate in Istanbul for a scheduled appointment to pick up documents that would allow him to marry his Turkish fiance. He never walked out and his body has not been found.

The October 2, 2018 slaying brought into sharp focus the very concerns over human rights that Khashoggi had spent the last year of his life in exile in the US writing about in columns for The Washington Post — and the reason he may have been targeted.

At a time when Prince Mohammed’s social reforms were being widely hailed in the West, Khashoggi’s columns criticised the parallel crackdown on dissent the prince was overseeing.

In Washington, Congress has said it believes Prince Mohammed is “responsible for the murder,” despite Saudi insistence he had no involvement in the operation, which involved several agents who worked directly for the 34-year-old prince.

President Donald Trump has condemned the killing but he's stood by the crown prince and defended US-Saudi ties. Washington has sanctioned 17 Saudis suspected of being involved, though not Prince Mohammed.

Among those sanctioned is Saud al-Qahtani, a hawkish former adviser to the crown prince whom the Saudi attorney general's office said Monday had no proven involvement in the killing.

Riyadh's criminal court also ordered that Saudi consul-general in Istanbul at the time, Mohammed al-Otaibi, be released from prison after the verdicts were announced, according to state TV.

Al-Otaibi, however, has also been sanctioned by the US due to his “involvement in gross violations of human rights." The US Department of State has also issued travel bans against the consul general's immediately family.

After holding nine sessions, the trial concluded that there was no previous intent by those found guilty to murder, according to a statement read by Shaalan al-Shaalan, a spokesperson from the attorney general's office, and broadcast on state TV. Al-Shaalan said the attorney general's office is looking into the verdicts to see whether it will appeal.

The trials of the accused were carried out in near-total secrecy, though a handful of diplomats, including from Turkey, as well as members of Khashoggi's family were allowed to attend the sessions.

Agnes Callamard, a UN special rapporteur who authored an inquiry into Khashoggi's killing, has previously said the search for justice must not be left to the Saudi judicial system, which is “so vulnerable to political interference.”

Callamard reacted to the verdicts announced from Riyadh by tweeting that "the travesty of investigation, prosecution and justice continues" in Saudi Arabia.

Meanwhile, numerous critics of the Saudi crown prince remain imprisoned and face trial for their acts of dissent.

In Turkey, Yasin Aktay, a member of Turkey's ruling party and a friend of Khashoggi's, criticised the verdict, saying the Saudi court had failed to bring the real perpetrators to justice. He also lamented that the trial was not transparent.

"The prosecutor sentenced five hitmen to death but did not touch those who were behind the five," Aktay told The Associated Press. "These are people who cannot even use the bathroom without the permission of their superiors."

"The verdict neither meets the expectations of the public conscience nor the feeling of justice," he said.

Although Khashoggi's killing tarnished Prince Mohammed's reputation internationally, he is hugely popular at home, especially among young Saudis happy with the social changes he's ushered in.

Meanwhile, Saudi Arabia has over the past months launched efforts to open up the notoriously closed-off country to tourists and travelers from around the world as part of a push by the crown prince to boost the economy and change perceptions of the kingdom.