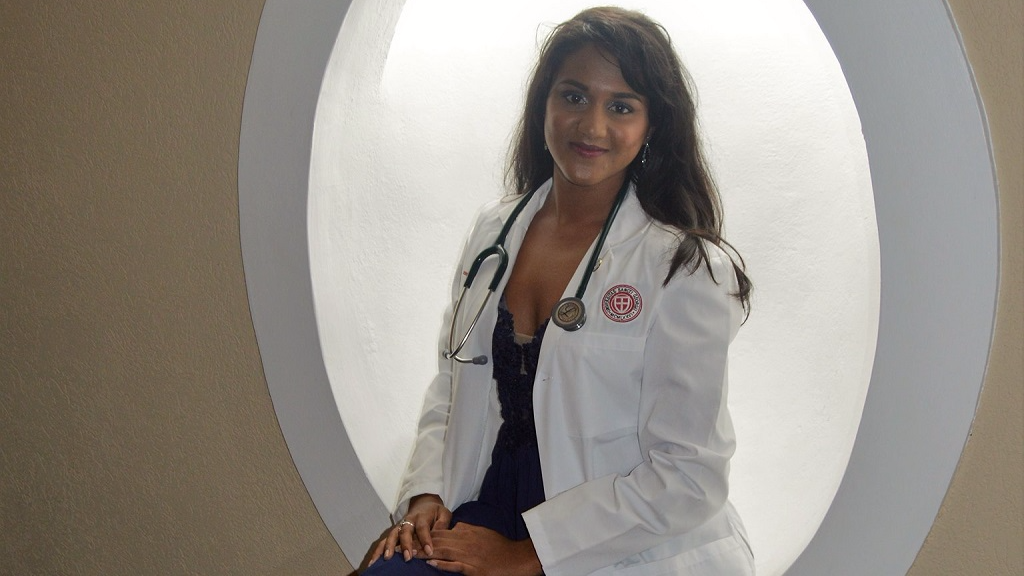 Not many people would look at Desiree-Anne Ramsaran, a bright-eyed, friendly young medical student and scholarship winner, and know that she battles with epilepsy.

The 20-year-old, who won an Additional Scholarship in Natural Science two years ago and now studies medicine at St Georges University School of Medicine in Grenada, remembers her first seizure and how it changed her life and that of her family forever.

"I remember I went for a sleepover at my cousins and didn't sleep much, I got maybe three hours of sleep (she would later find out that lack of sleep is one of her triggers). I remembered that I couldn't hold anything, and I dropped my breakfast, I had a headache and I felt like throwing up," she said.

Her parents, who panicked, called the doctor and she was put on sedatives. They sent her to neurologists and it was then they realised that she was epileptic.

"I was so young, I didn't really figure it out...my parents were like, 'how can we make this go away?' That was the hardest thing, realising that this isn't going to go away," she said.

Ramsaran said she had to learn to create her own coping techniques in order to manage her behaviour to limit the number of seizures.

"I have to manage my sleep because lack of sleep is a major trigger, I had to learn to manage my time," she said.

She said at first, she missed a lot of time at school.

Because she didn’t look ill, people had a hard time understanding what was happening.

"I would miss school a lot and people didn’t really understand. I would say, ‘I’m sick’, and they would say ‘But you look fine!’”

Ramsaran said that people need to understand that just because someone looks fine, doesn’t necessarily mean they are.

“Just because someone doesn’t look ill doesn’t mean they aren’t, you never know what people are going through, they might look like they’re making excuses but you never know, so treat everyone with respect,” she said.

Studying and coping with seizures

Because of her seizures, Ramsaran’s study routine is thoroughly planned out but her main conflict is between studying and sleep.

“In terms of studying for exams, I had to ensure I got enough sleep because lack of sleep is a major trigger.”

“I have a rule where I don’t study the day before an exam to keep my stress levels down, and also because my seizures usually happen first thing in the morning,” she said.

Ramsaran said she tries to maintain calm and focuses on self-care.

“Self-care is key, that’s the biggest thing I learned. I tried to drink coffee one time, because I was trying so hard to do work, but then I crashed and got sick.”

“You can’t sacrifice your health, and I learned that lesson.”

“People neglect themselves, they eat badly, they get sick. Public health care may not be the best but at the same time if you think something is wrong, let people know, don’t hide it,” she said.

Even with her challenges, Ramsaran not only succeeded but excelled, winning an Additional Scholarship in Natural Sciences and moving on to study medicine.

“I was disappointed at first, because I had gotten into a school in England, but my father said ‘this is good, you shouldn’t go too far’,” she laughed.

Understandably, her parents have been concerned but continue to observe her from afar, calling regularly just to make sure she’s ok.

“I think my parents are worried but they don’t show it, they don’t want to add to my stress, but if something is wrong I would definitely let them know.”

“My parents have been so supportive, they’ve taken such good care of me, I really want to make them proud,” she said.

Ramsaran says her choice to study medicine was not arbitrary. After learning of her illness, she is determined to pursue neurology to try to find out more about the causes and nature of epilepsy.

“50 million people worldwide suffer from epilepsy, but it’s strange that there still so much about this illness that we don’t know.”

“That was my drive to do medicine…at first I wanted to be a pilot but obviously I can’t do that now. It was so traumatic and exhausting trying to figure out how I got this, no one else in my family suffers from epilepsy. I would like to learn more about it.”

“I’d like to study neurology and try to help others like me. Hopefully I can go on to specialise and eventually return to practice in Trinidad and Tobago. I want to help people,” she said.

Ramsaran added that people with epilepsy can lead normal lives once they are given a safe environment and learn to manage their triggers.

“As long as they’re not in danger and are managing their health effectively, then I don’t see why not,” she said.

“Once I take my medication, manage stress levels and keep calm, I know can do this.”

“I can’t have caffeine so motivation is my drive, it keeps me going. If you really want something you’ll do whatever it takes.”

“And for all those people living with epilepsy or chronic illnesses, there is nothing wrong with being sick,” Ramsaran said.

Despite losing her parents, woman perseveres to become attorney