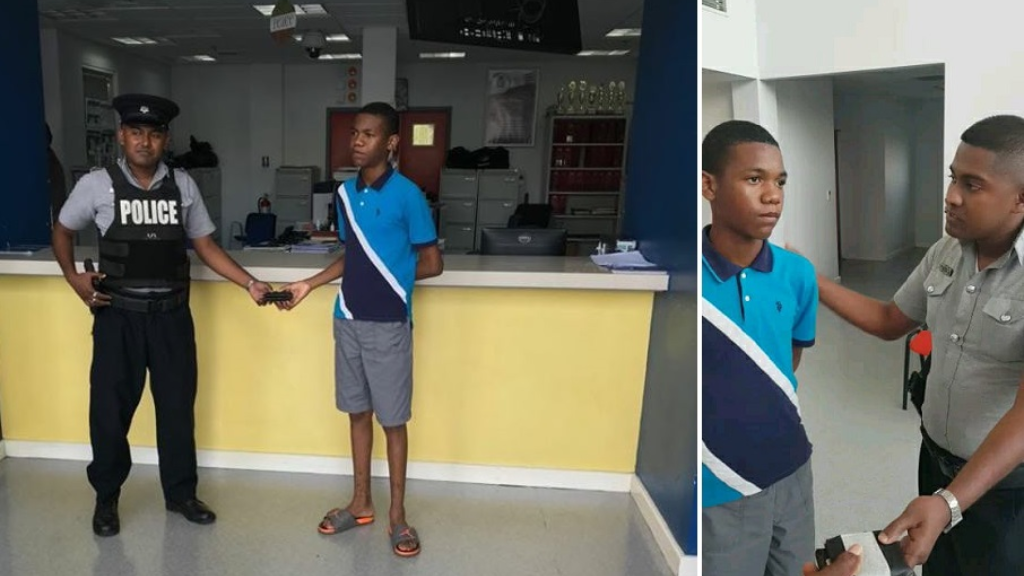 What would you do if you found a wallet full of money on the street?

One 14-year-old boy found himself in this position on Wednesday morning and opted to take the misplaced item to the Maloney Police Station.

Police are now praising the youngster for his honesty.

Leon Reyes, a form one student of Five Rivers Secondary School, was running errands for his grandmother on Wednesday morning when he came across the wallet on the pavement outside the Maloney mall.

It contained over $400 in cash, bank cards, credit cards and other personal documents.

Reyes visited the Maloney Police Station and handed the wallet over to the officers there who then tracked down the owner.

In a video response, the owner of the wallet who gave his name as Nigel said he was shocked when he received a call from the police to come collect the wallet.

Nigel who choked up and said he was emotional, thanked Reyes for doing the right thing. He said when he realised his wallet was lost, he accepted that he would never find it. He said not only was he shocked to have retrieved the wallet but with all his money and documents intact.

"I am shocked. This is not something you hear every day. I am really shocked and I appreciate it," he said.

To show his gratitude, Nigel gifted Reyes half of the money that was in the wallet and promised to reward him further in the near future.

Officer Stewart at the Maloney Police Station commended Reyes and told him to "keep it up and always do the right thing".

"Kindness has become so, so, so rare," he said.

Another officer at the station told LoopTT Reyes' honesty came as a surprise, given the current state of the country.

Reyes' uncle Andre Modeste, who is also a police officer, said he was proud of his nephew for showing that there are still honest young people in the country. He said despite coming from the stigmatised Maloney community, Reyes knew keeping the wallet was not an option.

He noted that Reyes is a member of the Maloney Police Youth Club and said this, as well as his strong family values, is what had been a positive influence in his life.