The Scrubbing Bench brings acting talent to the virtual space

A script written in 2011 will come to life in October when five-time Cacique Award winner Mervyn de Goeas presents The Scrubbing Bench.

The virtual production will be screened on a private YouTube link and Vimeo at a cost of $200 per ticket.

The production will be a series of readings from the script with each actor impersonating a different character.

It will be the first major theatrical production to utilise the virtual space since pandemic restrictions went into place in April. 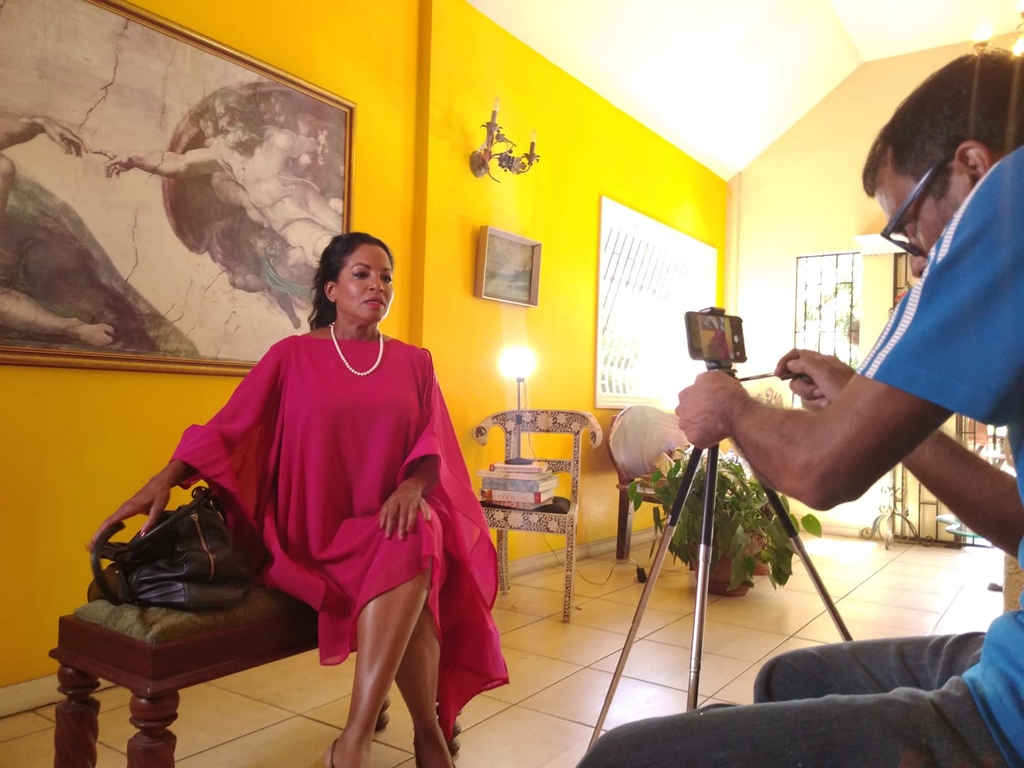 Natacha Jones is one of the actors on The Scrubbing Bench virtual production. Photo Mervyn de Goeas

“We have so many actors in crisis right now, they have no work. I know people who haven’t paid rent since February. I said we could do this and ensure everyone gets something out of it because these are my people. If this works, then other people could do it,” de Goeas told Loop.

De Goeas, a director, set designer, playwright and scriptwriter for the television series Westwood Park, said the idea for the production came when a friend, Rudy Hanamji, asked him to do a theatrical reading for Pride month in June.

Last year de Goeas did a reading of LGBTQ plays from Trinidad and Tobago but it wasn’t possible to do anything this year due to COVID-19.

“At end of March I told them theatre will be closed till the end of the year but when the lockdown eased we thought about showing it in August,” he said.

“I couldn’t ask anyone to do a reading of their plays because I don’t have money for broadcasting rights and I won’t just ask them to give over their child. In the middle of the meeting I remember this script I hadn’t thought about in years. I reread it for the first time in eight years and I said it wasn’t that bad. I called actors, writers, producers, directors and asked them to read it and give him feedback. The read it and their response was good.”

The script was The Scrubbing Bench, a film he wrote in 2011 when he received his third writing grant from the then Trinidad and Tobago Film Company.

Stephen Hadeed Jr is one of the actors in The Scrubbing Bench. Photo by Mervyn de Goeas

The title, he said, came from a popular saying.

“When you are on the scrubbing bench is like life is on pause, you are just waiting,” he explained.

The story, he said, came to him in church.

“Anytime I need to meditate on something I go to church, it has a calming effect. One day I went and I am looking around at the people there and I started wondering about their secrets. All of those bits and pieces inspired me and it is there in church the story started coming to me.  It is an LBTQ- themed piece set in the real world and it addresses several thing — Catholicism, marriage in crisis, one of the major themes is finding your space in the world, finding your happiness and finding your way from there,” he revealed.

As the country went back into a lockdown of sorts, de Goeas and his team wondered how to pull off the production.

He did a reading and got other actors to read as different characters.

“I said okay, we could do this, we will edit it and do a whole cohesive thing.”

The thing, which he says is not a film or a play, has developed into a massive project that has de Goeas excited and scared.

He said the production saw him and his team, among them Sean Edghill, Director of Photography, Tonya Evans, Production Manager and Paulla De Souza, Makeup Artist, working with actors locally and abroad.

“The whole process of working with actors in different countries, it was different. I am in love with this and how it will match together in some sequences,” he said.

The virtual aspect of the production has also seen ticket sales from all over the world in places such as Switzerland, Canada, Jamaica, France, the United States, the Netherlands and the United Kingdom.

De Goeas says he would love to see The Scrubbing Bench become an actual film in the future but he is mindful the virtual production could set a benchmark for the industry.

“If this works, it is not just for me alone it is for all of us. Maybe we can kickstart an element of the entertainment industry we did not know about.”

The Scrubbing Bench will launch on Friday, October 9 at noon and run until Monday, October 12.

In NYC, marking 50th anniversary of Pride, no matter what