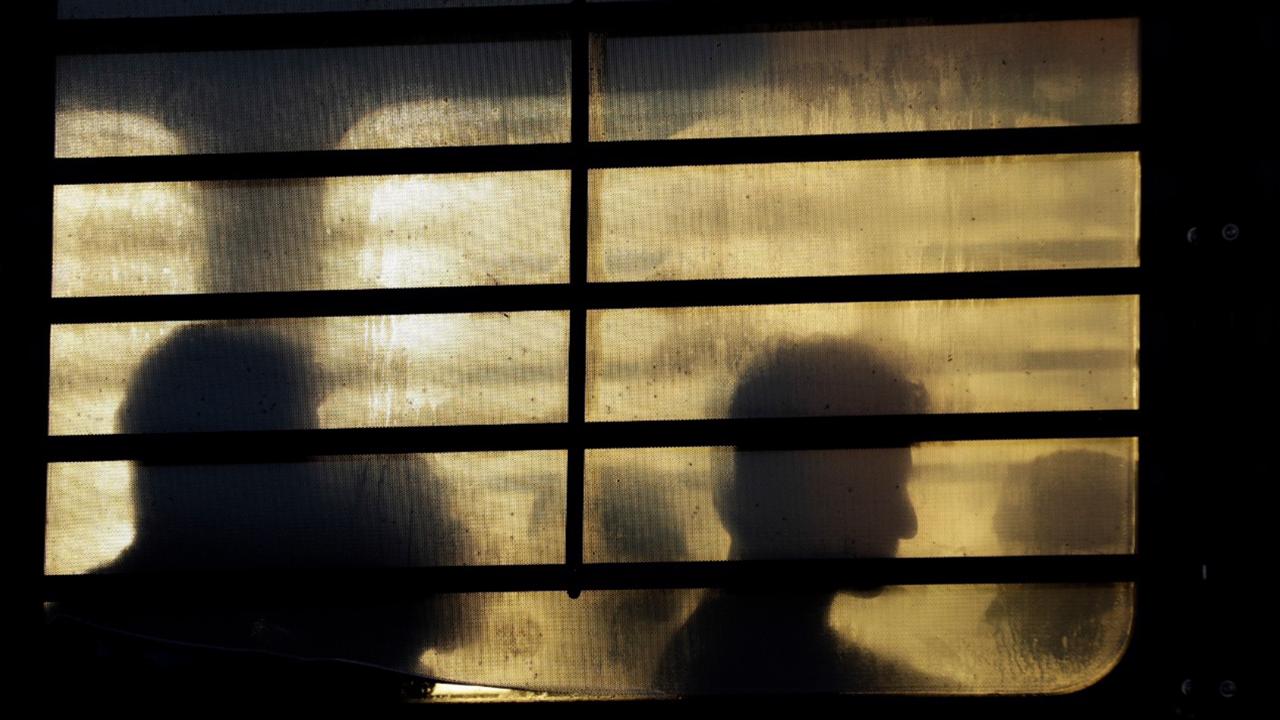 In this Nov. 16, 2018, file photo, immigrants who entered the United States illegally wait to board a plane for a deportation flight. More than 2,000 unaccompanied children have been expelled since March under an emergency declaration enacted by the Trump administration, which has cited the coronavirus in refusing to provide them protections under federal anti-trafficking and asylum laws. (AP Photo/David J. Phillip, File)

When officers led them out of a detention facility near the US-Mexico border and onto a bus last month, the 12-year-old from Honduras and his 9-year-old sister believed they were going to a shelter so they could be reunited with their mother in the Midwest.

They had been told to sign a paper they thought would tell the shelter they didn’t have the coronavirus, the boy said. The form was in English, a language he and his sister don’t speak. The only thing he recognized was the letters “COVID.”

Instead, the bus drove five hours to an airport where the children were told to board a plane.

“They lied to us,” he said. “They didn’t tell us we were going back to Honduras.”

More than 2,000 unaccompanied children have been expelled since March under an emergency declaration enacted by the Trump administration, which has cited the coronavirus in refusing to provide them protections under federal anti-trafficking and asylum laws.

Lawyers and advocates have sharply criticized the administration for using the global pandemic as a pretext to deport children to places of danger.

No U.S. agents looked at the video the boy had saved on his cellphone showing a hooded man holding a rifle, saying his name, and threatening to kill him and his sister, weeks after the uncle caring for them was shot dead in June.

And even though they were expelled under an emergency declaration citing the virus, they were never tested for COVID-19, the boy said.

Three weeks after their uncle was killed, the children fled Honduras, crossing the U.S.-Mexico border alone. Under the normal process set out by US law, they would have been referred to a government facility for youth and eventually placed with their mother.

Instead, they were expelled on July 24 after three days in US detention and now live in Honduras with another uncle who is looking to leave the country himself.

US Customs and Border Protection declined multiple requests for comment on the boy’s story, and US Immigration and Customs Enforcement also declined, saying the children had been in Border Patrol custody until they boarded a deportation flight operated by ICE.

Spokesmen for both agencies have refused to answer most questions about how they treat roughly 70,000 adults and children expelled under the emergency declaration issued in March.

They have refused to say how they decide whether to expel children or where to detain them before the expulsion, including in hotels where at least 150 unaccompanied children as young as 1 year old have been held.

Much of what’s known about expulsions have come from the accounts of children like the 12-year-old boy, who recounted his experience to The Associated Press last week with a recall of details that makes him seem older.

Their identities were withheld because of fears the children are still targeted by the people who killed their uncle.

Dr Amy Cohen, executive director of the advocacy group Every Last One, interviewed the boy several times and said she found him credible based on her conversations with hundreds of other immigrant children.

“When he has an opportunity to exaggerate or embroider his story, he absolutely does not,” Cohen said. “And he is consistent with everyone he has talked to. There’s no sense that the story is rehearsed.”

Six children have died since 2018 after being detained by the Border Patrol, several in conditions that raised questions about how the agency treats children. The agency says it has instituted new medical checks and takes anyone determined to need additional care to a hospital.

In court, meanwhile, the Trump administration has argued children it is seeking to expel are not entitled to protections under the Flores settlement, a 2-decade-old court agreement that sets standards for the detention of immigrant children.

The children's uncle took them in three years ago after their mother fled with their older sister due to gang threats, according to the family.

It’s not clear who killed the uncle. But the boy said he remembers family members deciding not to have his uncle taken to the hospital because they feared they wouldn’t be able to afford to get his body out of the morgue.

The killing frightened the family. According to the boy, he was left alone in his uncle's home with his sister to fend for themselves. The boy said he cooked meals for them with the beans and eggs left in the house.

Then, one day, he said, a man approached him outside the house, asked to see his phone and gave it back with a video saved on it. In the video, a masked man said the siblings’ names and warned: “You either join us and start working with us,” or end up like your uncle. The same day, someone left a note outside their home threatening them, he said.

“It reminded me of my uncle's death,” he said. “I felt a lot of fear.”
They joined a large group of migrants leaving Honduras in hopes of reaching the US, he said. After the group split up in Guatemala, a man took him and his sister through Mexico and to the border.

Parts of the story are impossible to verify. Experts say MS-13 and other gangs often deliver death threats verbally, and migrant groups and routes through Mexico and Central America are known to be controlled by human smugglers who charge thousands of dollars per person.

The boy’s mother says she doesn’t believe her son or any other relative paid a smuggler.

The siblings crossed the border around July 21 and were apprehended by Border Patrol agents, the boy said. Based on his description, it appears he and his sister were detained at the Border Patrol’s central processing centre in McAllen, Texas, where children and adults are separated into large cages of chain-link fencing.

Opened during the administration of former President Barack Obama, the same processing centre was used two years ago to detain hundreds of parents and children separated by the Trump administration's zero-tolerance policy.

The boy said he was held in a cage with about 20 other boys his age and older. He was separated from his sister but could see her from a distance in another enclosure.

Once a day, someone took their temperatures, but the boy says he was never given a medical exam or a test to see if he had the virus. He said he wore a mask he brought with him from Honduras.

He was able to call his mother from custody once before he and his sister were expelled. The phone call she received was from a number in McAllen, Texas.

The next call the mother received was from an official in Honduras, a few days later, asking her to send a relative to pick her kids up from a shelter for deported children. That was how she learned they had been expelled, she said.

She sat recently in the trailer where she lives with family, including her elder daughter, now 16.

“I wanted something to be done and to be able to be calm, to know that my children are safe with me,” she said, crying. “No part of Honduras is safe.”