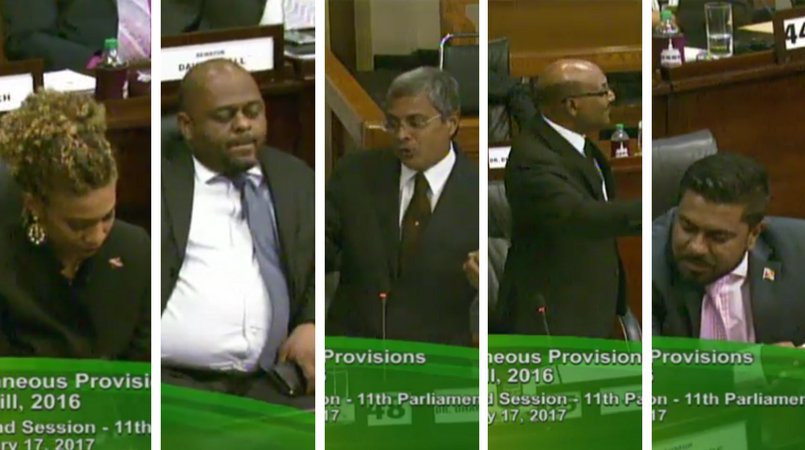 The Miscellaneous Provisions (Marriage) Bill, 2016 was passed in the Senate on Tuesday night, however four Opposition Senators and one Independent Senator abstained from voting on the Bill.

Two Opposition Senators were not present for the vote.

Attorney General Faris Al-Rawi also opted to remove the provisions that set out a requirement for a special three-fifths majority, which means the Bill now needs a simple majority to be passed into law.

He said he is aware that this leaves the matter open to civil suit however he is prepared to stand behind the decision.

Senator Danayshar Mahabir argued that the marriage age limit of 18 years old is in conflict with the current minimum employment age which is 16 years of age, to which Al-Rawi said that that matter would be addressed at a later stage.

Opposition Senator Wade Mark requested a clause 4(a) be inserted into the Bill which allowed for 16-year-olds to be married once approval was gained by the courts and the child’s parents:

“Where the parents of a child who has attained the age of 16 but who has not yet attained the age of 18 is desirous of having that child enter into a contract of marriage shall make an application to a judge of the family court, who shall take evidence from (1) the child and (2) their parents, and upon satisfaction that the child is of sufficient maturity, grant a certificate that it is in the best interest of the child to enter into such marriage contract.”

He said that it was impractical to not consider such an exception as such circumstances exist in society.

However the clause was not voted in.

Ameen defended Opposition's selection of Independent Senators who opposed the Bill, saying that they represent cultural views of groups in society who deserved to be heard.

“Those views have been criticized but they are real, they are part of our multicultural society and we must give an air to those views.”

She said the views of religious organizations are not the only groups that have an impact on the Bill and there are mechanisms in Parliament that allow for hearing other views.

She referred to a statement by Opposition Leader Kamla Persad-Bissessar in May 2016 against child marriage and said the position is the same.

“There is no doubt that the UNC and leader of Opposition has been one of the strongest advocates for the protection of children in Trinidad and Tobago," Ameen said.

Persad-Bissessar said: "The position I held and adopted as the Trinidad and Tobago position was: “Early and forced marriage is one of the most significant barriers to girls’ education, maternal health, female economic empowerment and the realisation of basic, fundamental human rights."

The legislation now goes to the Lower House to be debated by Members of Parliament.