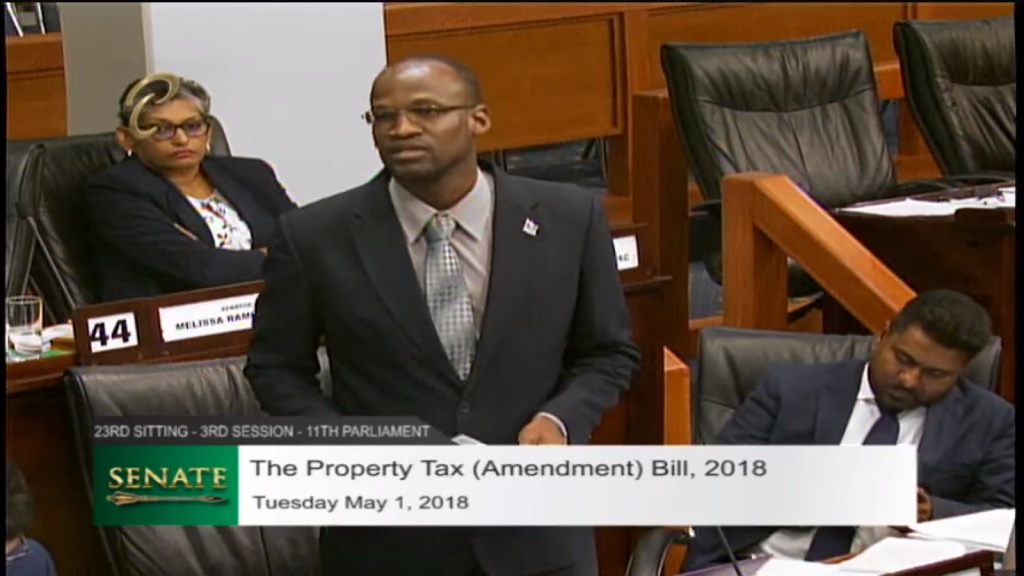 As debate continued on the controversial Property Tax (Amendment) Bill 2018 in the Senate on Tuesday, Opposition Senator Taharqa Obika slammed government for planning to tax squatters and also raised concerns over its proposal for the tax to be retroactive.

Noting that there are over 300,000 squatters in Trinidad and Tobago, the Opposition Senator said many of them are forced to squat and therefore they should not be taxed.

“Taxing squatting communities is immoral, unethical and should not be part of any bill that passes this house and any person of conscience will not support such clauses…These are the people that are the salt of the earth. They are the people that make up the bedrock of our society. This government by this tax is making poverty a crime in Trinidad and Tobago."

Obiqa also opposed what he described as the ‘ridiculous’ retroactive clause, which would make property owners liable to pay back-dated taxes from 2016-2017.

"...When you make this thing retroactive from the 30th of September, 2016—so it means to say 2016 to 2017, you have to pay back-dated taxes, and 2017 to 2018, 30th of September, we are called upon to pay back taxes. Madam President, if that is not the height of irresponsibility and almost—I “go to say” evil and wickedness on the part of any administration, I do not know what is."

“The people of Trinidad and Tobago are tired. The tax to recovery regime has failed. There is no need to add this ridiculous clause for retroactive payment,” Obika said.

The Independent Senator questioned what would happen to those people who have signed lease agreements or bought and sold property inside of the retroactive period.

“I have a concern with that in the sense that, retroactive legislation is always one fraught with difficulty especially in land-related and land tax matters,” he said.

And, Independent Senator Melissa Ramkissoon said she does not support the tax at this time.

‘So for Trinidad and Tobago, I personally believe an increase in Property Tax revenue is not necessary at this time and an increased tax rate can be viewed as oppressive.”

However, Minister in the Ministry of Finance Allyson West said the tax is necessary.

She urged the public to stop thinking that it is a ‘fearsome’ tax, but one that is required.

“It is incumbent in us to recognize that in the context of where Trinidad and Tobago is, not necessarily financially, but the nature of the economy what we want the government to supply, how we want it to supply it, the fact that we have to improve our delivery of services, it is a tax that is required, it is a tax that is prudent,” she said.