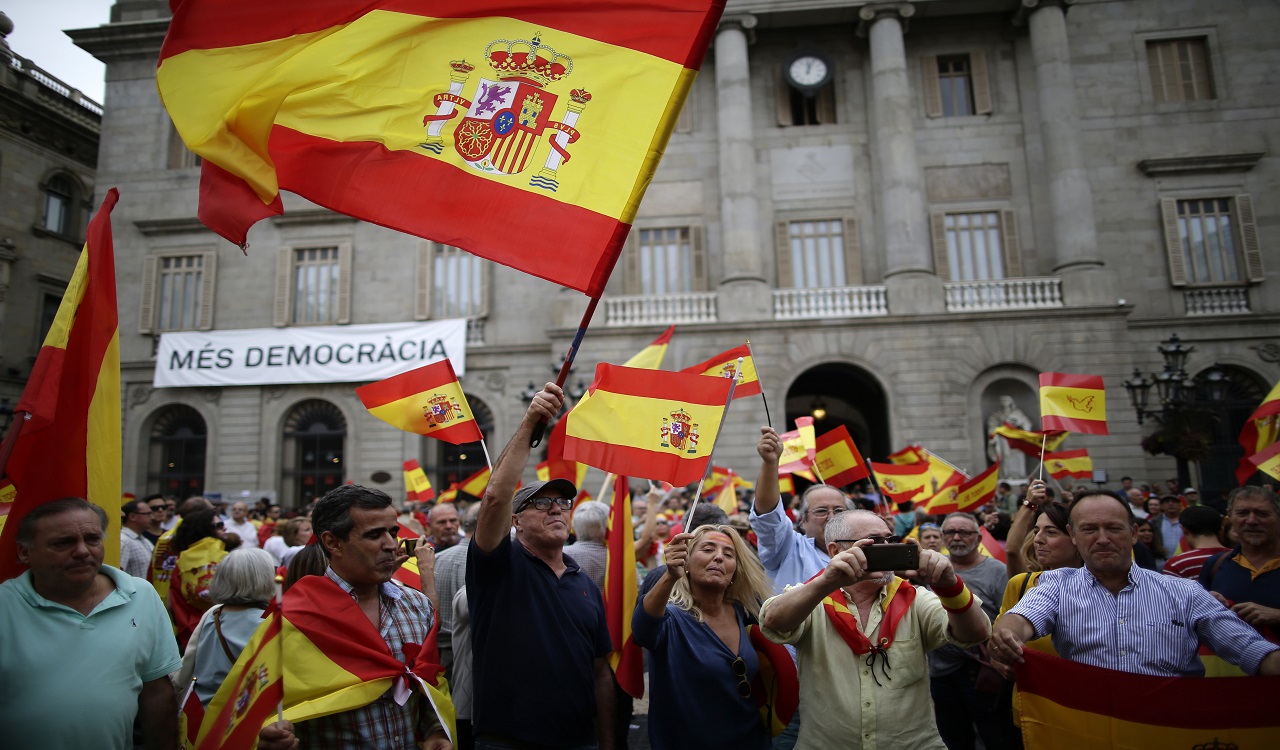 Catalonian separatists vowed Saturday to ignore a police ultimatum to leave the schools they are occupying to use in a vote seeking independence from Spain.

As police methodically sealed off hundreds of schools, some parents decided to send their children home and girded for pre-dawn confrontations Sunday with police.

Tensions rose across the country over the planned vote. In the Spanish capital of Madrid, thousands marched to protest the separatists' attempt to break up their nation, demanding that Catalan leaders be sent to jail. In Barcelona, the capital of Catalonia, thousands more took to the streets to urge their prosperous region to stay inside Spain.

The police deadline of 6 a.m. Sunday for the activists, parents and children in the occupied Catalan schools is designed to prevent the vote from taking place, since the polls are supposed to open three hours later.

Spain's Constitutional Court suspended the independence vote more than three weeks ago and the national government calls it illegal. Police have been ordered to stop ballots from being cast on Sunday and have been cracking down for days, confiscating millions of ballots and posters.

Catalonia's defiant regional government is pressing ahead despite the ban and the police crackdown, urging the region's 5.3 million registered voters to make their voices heard.

Spain's foreign minister said Saturday the Catalan government's plan is anti-democratic and runs "counter to the goals and ideals" of the European Union.

"What they are pushing is not democracy. It is a mockery of democracy, a travesty of democracy," Minister Alfonso Dastis told The Associated Press.

He said some pro-independence groups are "adopting Nazi-like attitudes by pointing at people that are against that referendum and encouraging others to harass them."

A top Spanish security official in Catalonia says police have already sealed off more than half of the 2,315 polling stations and disabled software that was to have been used in the referendum. Enric Millo, the highest-ranking Spanish official in the northeastern region, said parents and students were found to be occupying at least 163 schools — but about 1,000 more still need to be checked.

The regional police force has been ordered not to use force in vacating the schools. Millo said anyone remaining in schools after 6 a.m. will need to be removed in line with a judge's order.

"I trust in the common sense of Catalans and that people will operate with prudence," he said.

Authorities have already confiscated 10 million paper ballots in the last few days — which will make it much more difficult for Catalonian officials to carry out an effective vote.

Millo said the government would tolerate ad hoc voting in the streets but that any results could not be considered a valid electoral test.

"They can always put a makeshift table in the street, with some buckets, and put papers in," he said. "But what Catalan authorities have promised, an effective referendum with legal basis and binding, is something that won't happen."

At the Congres-Indians school in Barcelona, designated as a polling place, activist Quim Roy said he would be sending his two daughters home before the deadline out of concern for possible violence. He said other parents planned to do the same.

"Who knows what will happen if the Guardia Civil comes?" Roy said, referring to the Spanish national guard.

He said he would not resort to violence but will not leave the building voluntarily.

Organizers have set up a range of activities in the schools — including yoga sessions, games, film screenings and picnics — to keep spirits high as the historic confrontation with Spain's central government unfolds.

Roy said there were no ballot boxes or ballots yet at the school but he was not bothered by that.

"They will appear," he said with a shrug.

At the La Sagrera primary school in Barcelona, parent Saverio Trioni said 20 parents and children slept over on Friday but "we expect way more tonight. The plan is 100 at least." They are holding a music festival to keep everyone occupied.

Trioni said, however, that "we will leave if ordered to."

A pro-independence grassroots group admitted that Sunday's vote could be in jeopardy unless more schools were kept open for it. Open Schools spokesman Ramon Font told the AP he did not have an exact number on how many schools were being occupied by activists but felt it was more than the number stated by police.

"If the number of schools kept open does not rise, then the ability to exercise our right to self-determination will be in serious jeopardy. It will be very difficult to vote," Font said.

In Madrid, thousands of people rallied Saturday in a central plaza to protest the Catalan independence vote, angry that it could divide Spain. Some shouted "Long live Spain!" and "Puigdemont to jail!"

Catalan regional President Carles Puigdemont, who openly favors breaking away from Spain, is among those promoting the independence vote.

In Barcelona, Francisco Morales, a 69-year-old retiree, said he was marching Saturday to defend the unity of Spain against the "lies" of Catalan separatists. Morales and his wife were among thousands protesting the independence referendum.

"We don't want division. It's been enough lies telling people that they can't be Catalans and Spanish at the same time," Morales said. "The politicians supporting independence are bending the law to tear this country apart."

The main civic group behind Catalonia's push for independence said — given the concentrated efforts by Spain to block the vote — that a turnout of 1 million voters, less than a fifth of the electorate, should be considered an "overwhelming success."

Catalan authorities had hoped previously for a larger turnout than the 2.3 million people who voted in a mock referendum in 2014 in which 80 percent favored independence.

The Catalan government has pledged to declare independence from Spain within 48 hours of Sunday if the 'yes' vote wins, no matter what the turnout is.