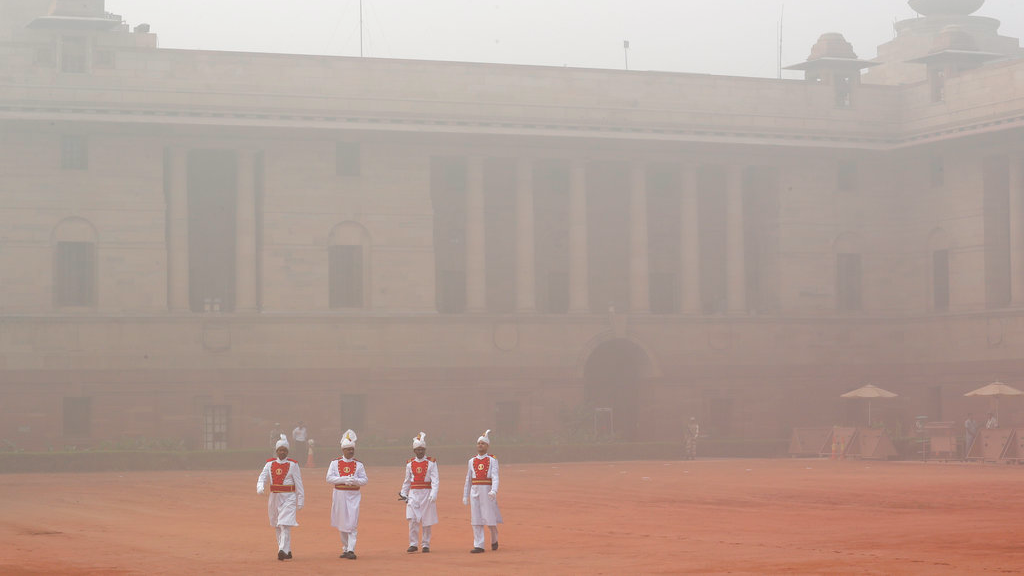 Indian presidential staff members walk surrounded by smog at the presidential palace in New Delhi, India, Tuesday, Nov. 7, 2017. Air pollution in India's capital has hit hazardous levels prompting local officials to ask that school shut down and a half marathon scheduled later in November be called off. (AP Photo/Manish Swarup)

A thick gray haze enveloped India's capital on Tuesday as air pollution hit hazardous levels, prompting local officials to ask that schools shut down and a half marathon scheduled for later in November be called off.

The readings of the government's air quality index hovered between 350 and 450, indicating that the health impact of breathing the air was "severe." The highest reading on the Central Pollution Control Board's index is 500. The pollutants on Tuesday that had the maximum impact on the reading were PM 2.5 and PM 10 particulate matter.

As winter approaches, a thick, soupy smog routinely envelops most parts of northern India, caused by dust, the burning of crops, emissions from factories and the burning of coal and piles of garbage as the poor try to keep warm.

Over the past two years, New Delhi has earned the dubious distinction of being one of the world's most polluted cities.

On Tuesday, Belgium's King Philippe and Queen Mathilde, in India on a weeklong state visit, inspected a military guard of honor at the sprawling presidential palace in New Delhi under a cover of smog that hampered visibility.

As the haze settled over the city in the morning, many people covered their faces and noses with scarves to try to protect themselves. Arvind Kejriwal, the capital's top elected official, asked the education department to consider closing down schools.

The Indian Medical Association said New Delhi was in the midst of a "public health emergency" and appealed to the city government to halt sports and other outdoor activities in schools. The association also said the Delhi Half Marathon, scheduled for Nov. 19, was likely to leave those participating especially badly hit because the air quality is worst during the early part of the day, when the run takes place.

The sharp drop in air quality is most dangerous for the elderly, children and those already suffering from respiratory ailments. Constant exposure to pollution also reduces lung functionality for healthy adults over a period of time.

According to a recent report by the Lancet medical journal on the impact of pollution across the world, one out of every four premature deaths in India in 2015, or some 2.5 million, was attributed to pollution.

Delhi has struggled with putting in place pollution control measures over the last two years. It has tightened vehicle and factory emission norms and reduced the number of cars on the roads on the worst-hit days. But it's had a hard time enforcing laws about crop burning, garbage fires and construction dust.

Kejriwal said on Twitter on Tuesday that his government had written to ministers in the neighboring states of Punjab and Haryana demanding an end to crop burning there, but that little had been done.

"All of us together have to find a (solution) to this," he tweeted, adding that the city becomes a "gas chamber for almost a month" every year.