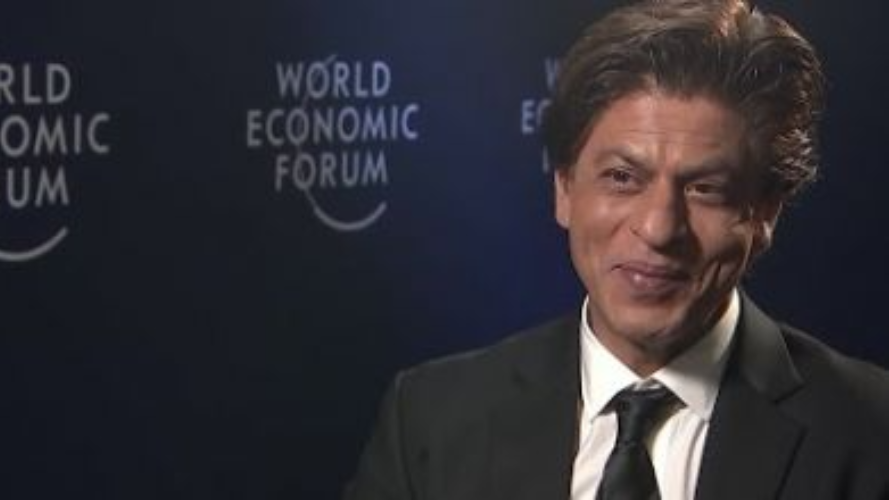 Bollywood superstar Shah Rukh Khan was at the World Economic Forum in Davos, Switzerland on Monday to receive the 24th Crystal Award - which celebrates the achievements of leading artists who are bridge-builders and role models.

During his visit, he also took time to talk about his latest film "Padmaavat," which has sparked protests and violence in India for its depiction of a 14th Century Hindu queen belonging to the high Rajput caste and the Muslim ruler Alauddin Khilji.

"Everybody just needs to calm it down a bit," said the veteran star, who explained that it's not uncommon for films in his home country to cause "dissent."

"India is extremely diverse. Whenever you take a film about history or real life character or a biopic you'll always have some people bringing it up. And I think this one went a longish way."

Khan says he's confident the filmmakers will be able to appease those offended by the film.

"The discussion has gone on I think has been cleared now and hopefully it'll release well. If there is any dissent, I also believe that you know, cinema if it is to dissentful and troubling to any community or any sect, I think we can change it a bit. I've done it two or three times in my films without harming the film too much. I've been able to do it and I think this one will also pass through like that."

Khan says, when it comes to his own take on religion, he likes to keep an open mind.

"Because where I come from and where I'm going and where I've been in the last 50 years of my life that really hasn't been an issue as far as my work is concerned. Of course, they will be few people who will say X,Y,Z, but that has never been the mainstay of who I am, including the way we are in the house. You know, I have a Hindu wife, our kids know both the religions, whenever they wish to and however they wish to: it's never been imposed on them. And I think my outlook if it is outspokenness, it's actually at a very personal level as an artist."

He also addressed sexual harassment in the Bollywood film industry and the limited #MeToo campaign in India, and expressed hope that it would keep the freedom to work and experience, even at the risk of failure

"We know it does exist, can exist and we need to make sure that it doesn't go any further than it has already. So I think I'm on the side of the women who were not have directly named yet, and shamed yet, that bit of being a conservative on that is alright. But I think there's nobody in the Indian film industry and I can vouch for that who don't realise the impact of what the ladies have done in Hollywood. Perhaps we don't need it to be done in Bollywood but we know what we need to do to make sure it doesn't go out of hand."

As for his future career, Khan says he hopes he can continue to do work that interests him, whether it's commercially successful or not.

"I want to do films as an actor which is different so I have done some, some of them tanked, like fan, which is my favourite film. I really love that film and nobody wanted to watch it. But this has happened to me before. Like I said, years ago when I did a film on journalism nobody wanted to watch it. My favourite film. I want to be heading there. I want to be heading where being a star, not being a star, I'm still doing something which I love and even if it goes wrong. I want to have, how do you, say? the luxury of going wrong. I hope this luxury continues for life and it's not 'Hey, you're making too many duds, out!' I hope I'm allowed that luxury."