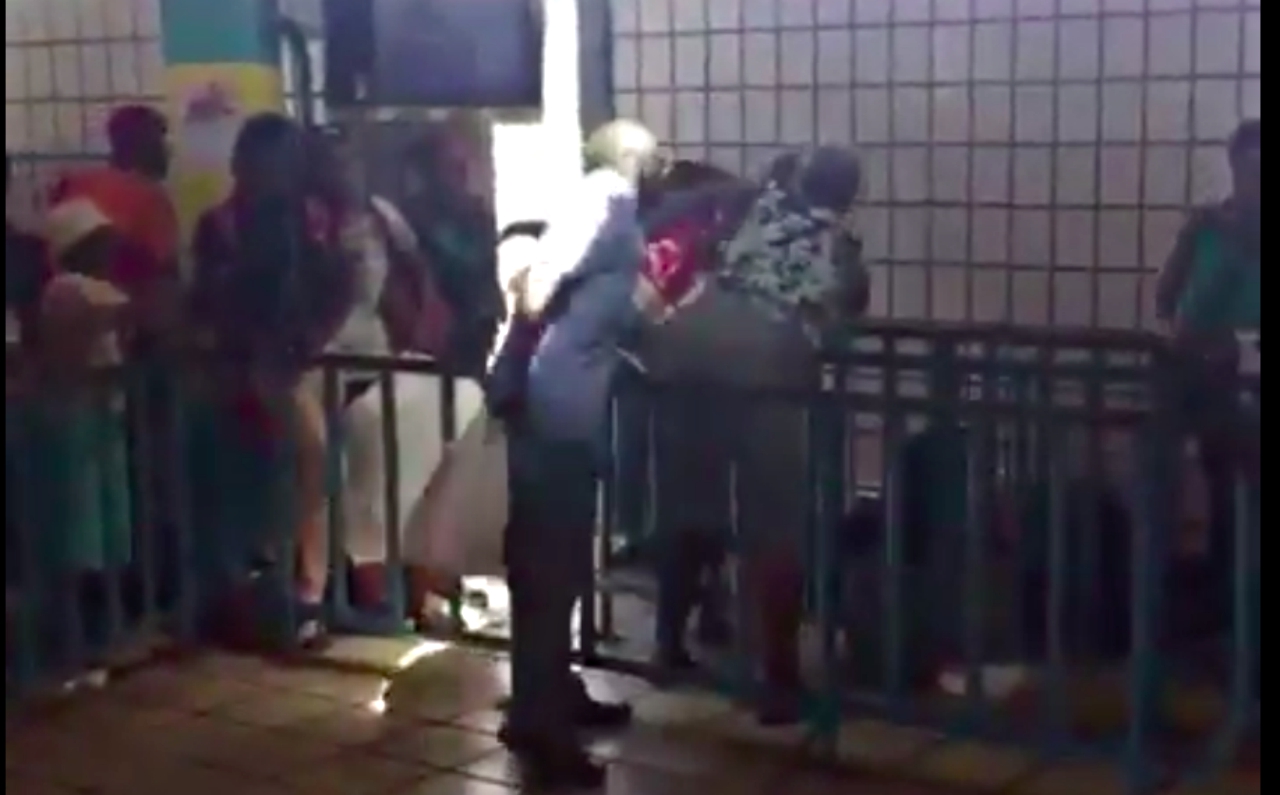 Screenshot from the video in circulation.

Two women in Barbados were caught on video coming to blows - this as the Ministry of Education in Barbados is working to curb violence in schools among the students.

The video, which was recorded in the Fairchild Street Bus Terminal, showed an altercation between two women who were in the line for the bus. A gentleman comes and tries to pull away one lady, while persons in the line begged them not to hit them. Others in the terminal can be heard howling with laughter.

In the past, this particular bus terminal has been the scene of student altercations as well, and this led Shone Gibbs - President of the Barbados National Council of Parent Teacher Association (BNCPTA) - to lament, “Same script, different cast.”

The date of this particular incident has not been confirmed, and it's not clear whether it's a new video or an old one being re-circulated. But when asked how he felt about the video content, Gibbs told Loop News:

“Behaviour is learnt and the examples being set by some of the adults are undesirable. We need good and civic-minded adults to step up and let the positive light shine and cover our young children. This can only be achieved one child, one family at a time. We as parents must understand that we are the ‘first’ teachers, influencers, counsellors, etc.”

who these gran mothers belong to??? pic.twitter.com/hV5NXOxEOm

Looking at the women caught in the act, he continued, “These were two mature ladies, grannies, surrounded by at least a half-dozen or more adults and others videoing and laughing as if its a funny thing.

“That is something unheard of in Barbados generally and they found it funny. The only person who sought to intervene seemed to be a mature man passing by.

“Suppose one of those grannies had a knife and had stabbed the other one?

"We have become sadly, a bystander society. A society that literally stands by and let [sic] a lot of foolishness happen and we laugh. We didn't even see nor hear any attempt by those immediately around those two grannies to stop nor to part them.

“Have we become so numb to seeing violence in its many forms that we can no longer determine that prevention or intervention was required in that situation?”

He added, “The man used only one hand to pull one of the grannies away. Could no one else have done that as soon as they got physical? Furthermore, could no one have spoken to them or walked one of them away even to another gate?

“We are in a sad state when two grannies can come to the stage of fighting in a bus terminal and we stand by and laugh.”

The President said, “Shame on them yes, but also shame on us as a people.”