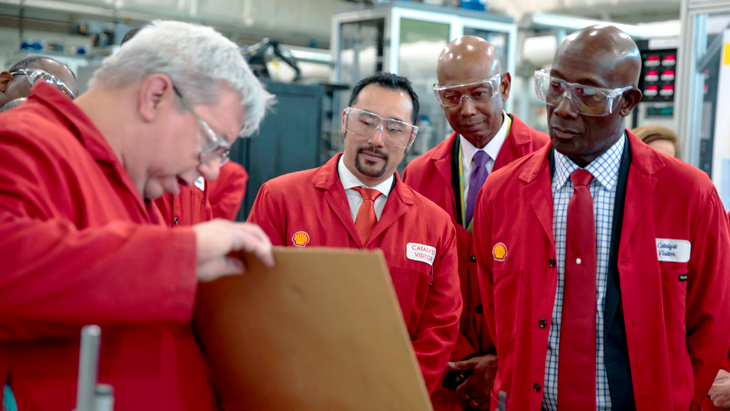 Following a meeting in Houston on Thursday between Prime Minister Dr Keith Rowley and senior members of the Shell executive team, the energy giant expressed its willingness to play a leading role in unlocking this country’s future oil and gas potential and building a stronger competitive position in the country.

Rowley, along with Minister in the Office of the Prime Minister Stuart Young, was invited by the company to hold discussions on various initiatives.

During the meeting, the company gave an update on the status of a number of initiatives which are at various stages of the developmental and project life cycle, and presented its Strategic Vision for the business in Trinidad and Tobago.

One of the programmes which was the subject of detailed discussions and agreement was the Starfish project which is to be the subject of new developmental objectives commencing in the next quarter of 2017.

Noting plans between the Government and Shell for bringing cross-border gas from Venezuela into the local market to meet strong demand in the petrochemical sector, the Prime Minister expressed his confidence in the company’s ability to successfully execute its expansion.

Rowley requested that the company place greater emphasis on hiring and training local qualified personnel to increase the employment of T&T nationals throughout the company as it is important to strike the right balance between local and expatriate employment.

He gave the assurance that Government will do what is necessary within this country’s laws to provide accelerated approvals for its work programme, with the expectation Shell would deliver in the shortest time possible.

Shell has a long history of operation in Trinidad and Tobago. In 2016, the company re-entered the local market with its acquisition of the BG Group.

The Prime Minister is expected to continue energy talks today in separate meetings with EOG Resources and Exxon Mobil.