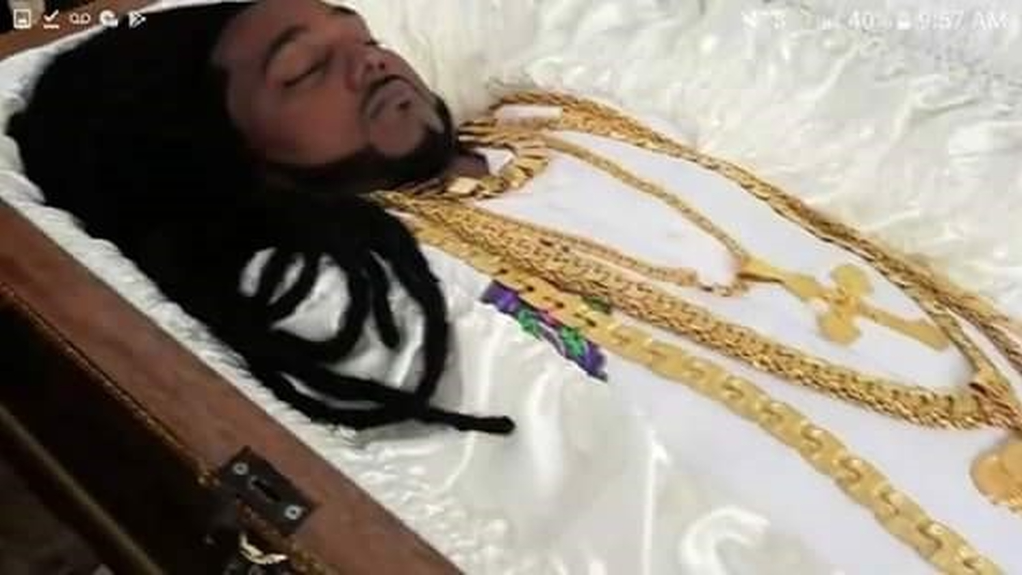 Scores of mourners, including family and friends, flocked the Chaguanas home of murdered car dealer and real estate agent Sheron Sukhdeo on Friday morning to pay their final respects.

He was gunned down outside his mother-in-law’s house in Charlieville on Monday night.

Sukhdeo’s body arrived at the house in a white hearse just before 10 am.

He was dressed in white along with his famous gold jewellery adorning his fingers, hands and neck.

His casket was inscribed with the words ‘Sheron’s Auto’ and ‘World Boss’ inside.

A pair of Timberland boots were placed in the casket near to his feet.

His trophies from various racing events were on display.

Several of his luxurious cars were also observed parked outside the house.

His body was taken into the house briefly and then brought back outside where his wife Rachael Sukhdeo participated in his final Hindu rites.

The officiating pundit told mourners that no one knows when the time will come to die.

The pundit said that there are three things in life we do not know.

These he said were: when we will die, where it will happen and how we are going to die.

This as the pundit noted that Sukhdeo had no idea he was being stalked for death.

However, he said one has to appreciate that whatever happens in life is the will of God.

The pundit described Sukhdeo as a ‘good soul.’

He said he had the privilege of meeting him at primary school.

The pundit said he also did prayers for him and his family.

He added that everyone has bad aspects, as well as good within them.

“Not only long ago, less than a year, we sat down and did prayers," he said.

Alleyne, who also spoke at the funeral said Sukhdeo’s killing was unfortunate.

“I personally have lost a good friend. To me he was good,” he said.

Sukhdeo will be cremated at the Waterloo cremation site.

No one has been held in connection with his murder.

However, police say they are working on several leads.