Should the SAT be optional? Bribery scandal renews debate 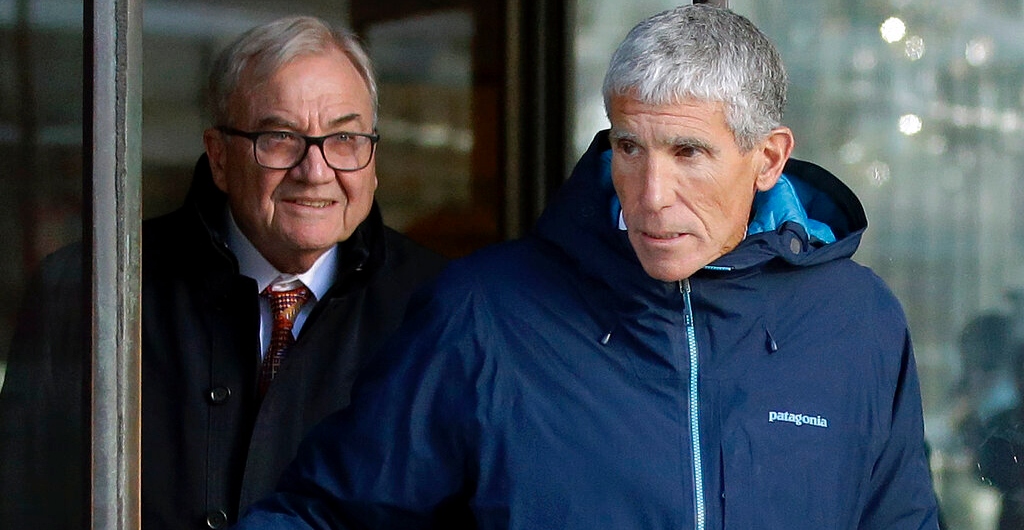 In this March 12, 2019 photo, William "Rick" Singer, front, founder of the Edge College & Career Network, exits federal court in Boston after he pleaded guilty to charges in a nationwide college admissions bribery scandal, where ringers were hired to take SAT tests and proctors paid to look the other way. (AP Photo/Steven Senne)

The most brazen abuses of standardized testing in the college bribery scandal could be chalked up to security lapses: the ringer hired to take the SAT, the proctors paid to look the other way, the accommodations for extra time obtained through false diagnoses of disabilities.

But the scheme in which wealthy parents allegedly bribed their children's way into top schools also has highlighted deeper concerns about the fairness of using SAT and ACT tests — focal points of a billion-dollar consulting industry and gatekeepers for a U.S. admissions system already seen as favoring wealth and privilege.

Hundreds of colleges in recent years have made it optional for applicants to submit test scores in an effort to promote equity and diversify applicant pools. Lately, their ranks have been growing by the week.

"In the long term, the conversation — even without the bribery scandal of a couple of weeks ago — the conversation about access to higher education has been simmering for a long time, and is starting to take shape in a way that we really are examining every aspect of the admission process to understand fully how it either promotes or inhibits access," Hawkins said.

The ringleader, admissions consultant Rick Singer, was among 50 people charged in the scheme that involved bribes paid to test administrators and college coaches. Perfectly legal, however, are $1,000-an-hour tutors and coaches hired to guide affluent students through the admissions maze, including rigorous test preparation.

In California, lawmakers disgusted with the fraud have proposed a series of reforms to prevent a repeat, including a discussion of whether it's time to phase out the tests at public colleges statewide.

David Coleman, the chief executive of the College Board, which administers the SAT, said he agrees that commercial prep classes have corrupted the test. But he said the solution is not to do away with the tests, which he sees as complementing a student's high school grades and as a check on grade inflation, which also tends to benefit wealthy students.

"We've got to admit the truth, that wealth inequality has progressed to such a degree that it isn't fair to look at test scores alone," Coleman said, "That you must look at them in context of the adversity students face."

To that end, College Board has begun piloting an "Environmental Context Dashboard" to measure SAT scores in relation to the student's neighborhood and school. In its pilot phase, the dashboard helped Florida State University admit about 400 more students from disadvantaged backgrounds — which are more likely to be students of color — in 2018, said John Barnhill, the university's associate vice president for enrollment management.

"It takes the emphasis away from getting the highest score you can get to," Barnhill said. He added it's more about, "How did you do where you are?"

But despite a growing number of schools moving away from standardized tests, most U.S. colleges still require them just as much as a high school transcript and application fee. Last year, about 2.1 million students took the SAT, and about 1.9 million took the ACT.

At the University of San Francisco, which announced a shift in its standardized test policy last week, administrators said SAT and ACT scores are more reflective of a student's economic background than their academic abilities.

DePauw University, the University of Minnesota Crookston, University of Denver and Bucknell University are among others to say recently they won't ask for the results, joining roughly 1,000 other schools, according to the nonprofit group FairTest, which argues standardized tests are biased against minority groups. The list includes elite liberal arts colleges as well as research universities and for-profit schools. Those caught up in the scheme require scores.

Technology is letting institutions that may have once relied heavily on them to consider other measures, said Dan King, president of the American Association of University Administrators.

A study published last April of nearly 1 million applicants found that when given the choice to submit scores, about a quarter of applicants did not. Female, underrepresented and low-income applicants chose not to submit scores at higher rates than male applicants. Black students were about twice as likely to exclude scores as white students.

Philip Sheppard, 20, from Houston, knew his SAT scores weren't great when he applied for Hilbert College just outside of Buffalo, New York. He included them in his application to the test-optional school anyway, hoping the additional effort would be rewarded.

"I saw it was optional but I submitted it just to solidify a place in the class," said Sheppard, who said he scored just under 1,000 out of a possible 1,600. "My thought process was, my scores weren't the highest so I just used them as something, 'Hey, I went the extra mile to take the SAT. Even though I didn't do the best, still I gave it my best shot.'"

Trini-born teen makes US headlines after acceptance into 17 colleges