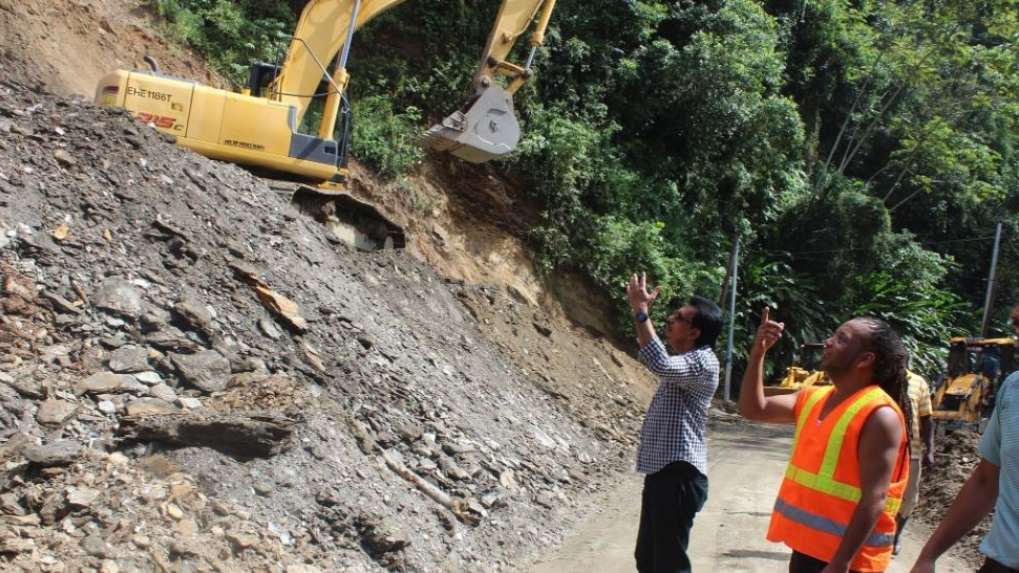 A total of almost approximately $2.7 million was spent on the repair of landslides along the North Coast and Lady Young roads between 2017 and 2018.

Minister of Works and Transport, Rohan Sinanan, was responding to an urgent question put forward by Opposition Senator Wade Mark in the Senate, saying that the cost of work was fair.

Repair work along was carried out along the North Coast Road in November 2017 after two major landslides and five landslips took place between August and December 2017.

Sinanan said the contractors are given bonded rates during emergency situations.

“Unlike what happened in the past in Works and Transport, whenever we have emergency work like this, we don’t just call out contractors and ask them to go to work and let them send a bill for us.”

“It was estimated a job like this, in the past, would have cost upwards of $10 million. What we do now is that we go to the bonded rates and these are the rates the contractors will work for when we have an emergency situation,” he said.

“We engage contractors with a bonded list, at fixed rates, and they are paid for the amount of time they spend on the job,” he said.

Sinanan said in late February and early March 2018, the resulting debris along the Lady Young Road was cleared through the collaborative efforts of several agencies including the Port of Spain City Corporation, the San Juan/Laventille Regional Corporation, and the Ministry of Works and Transport.

“Upon investigation into the slope failures, the Ministry observed that the hillside at the 4.4-kilometre mark was unstable, and we proposed that re-profiling of the slope to a more stable angle of repose was necessary to ensure the safety of road users and to avoid further landslips.

“An initial consultation was held with geotechnical engineer Dr Derek Gay and two areas of instability were identified to be removed.”

“It was recommended that the re-profiling of the slope to a more stable angle be undertaken in two phases. Phase 1 – stabilisation work conducted using contractors’ service on a round-the-clock basis from March 1-4, 2018, to bring initial stabilisation to the slope.”

“Phase 2, work to bring long-term stability to the final slope continued daily from March 6, with the roadway being closed during peak hours, with work being completed on March 14, 2018.”

He said an assessment of the stability of the slope as a final step along the Lady Young Road is in progress.

Regarding the North Coast Road, Sinanan said repair was conducted in-house until November 17, where the use of heavier equipment such as backhoes and dump trucks were necessary to clear the roadway.

He reiterated that the contractors were hired at bonded rates.

No issue with hiring Ragoonanan

Sinanan also responded to questions concerning the hiring of contractor Ricky Raghunanan Company Ltd, after the company's CEO was questioned by police in February 2017.

Media reports claimed he was questioned in connection with US$2 million which was found hidden in plyboard in a container at the Pt Lisas port last year, however he refuted these claims.

Sinanan added that the Ministry was able to restore access to these main roadways at a reduced cost.

“We dealt with two major landslips that dealt this country severe hardship, and it was way less than the one fire truck, where one contractor charged $6 million to take (it) out from a hole,” he said, referring to a fire truck which was involved in an accident along the North Coast Road in 2013 and incurred a bill of $6.5 million to retrieve it from a precipice.

On November 2, a container with false documents arrived at the Port in Pt Lisas and a few days later a search was carried out of the container and US$2 million was found in blue crocus bags between plywood sheets.

Two other businessmen were also questioned in connection with the US$2 million find.

The money has since been forfeited to the State.