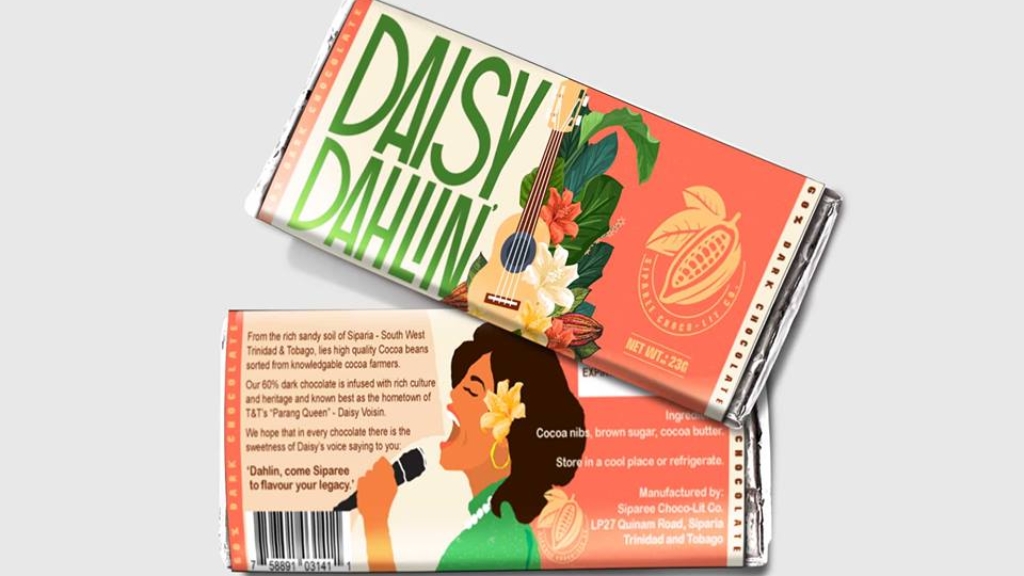 What’s in a chocolate bar?

With the Daisy Dahlin’ 60 percent and 70 percent dark chocolate bars, prepare for rich, natural cocoa flavour, with that melt-in-your-mouth Siparia sweetness that also tells a story of legacy, culture and heritage.

Named after undisputed Parang Queen of Siparia, Daisy Voisin, the 23 gramme chocolate bars produced by the Siparee Choco-Lit Company were unveiled at the Cousoumeh Festival at the Deltones Panyard in Siparia last weekend.

The annual event, now in its fourth year, celebrates heritage preservation and restoration through music, food, art, and culture. It also provides a platform for youth to showcase their skills and talent alongside international artists.

One of the main individuals behind the sweet success of Daisy Dahlin’, WHYFARM CEO Alpha Sennon, tells LoopTT he hopes that the marketing of the new chocolate will assist in bringing a resurgence and revitalisation of the cocoa industry in Siparia, where there are abandoned cocoa estates and fields.

He recalled that the production of the bars began with an initial conversation more than a year ago with soca artiste Machel Montano who expressed an interest in bringing chocolate making to Siparia, following the success of the Machel Montano 60 percent dark chocolate.

Through a grant from the Machel Montano Foundation for Greatness, and a Digicel Foundation EPIC grant the project was able to get off the ground with the creation of a lab at WHYFARM’s farm in Siparia.

Training was the next step in the process, with sessions conducted by the Alliance of Rural Communities of Trinidad and Tobago which continued for the period of a year.

First Citizens came onboard along the way and provided necessary funding which assisted in the development of the factory, the product and a brand.

Sennon said when it came to deciding what to call the chocolate, the idea was to come up with something that set it apart from other local chocolate products and highlighted Siparia.

A call was made to the community to decide on a name for the chocolate and a competition was held which attracted over 50 submissions. The guideline was simple - choose a name that reflected a Siparia icon.

Quilin Achat came up with the winning name, Daisy Dahlin’ and was awarded a cash prize.

The WHYFARM CEO said the idea was to tell a story: “Flavour in our heritage, tasting our legacy”.

He said this was only the beginning of ensuring the stories of Siparia’s legacy are told as they intend to launch new flavours every year at the Cousoumeh Festival highlighting other homegrown icons.

“We will tell the stories of our icons because we don’t even teach about them at schools anymore. It’s not just chocolate, there is rich history and heritage contained in this bar,” he said.

“A big part of the cocoa heritage in Siparia comes from the cocoapanyol and we want to create awareness and see a revitalisation of our cocoa by telling these stories.”

For the Christmas period, events are in the works to host a Chocolate Parang and other festivals to honour Voisin.

Sennon was also hopeful that the chocolate, which contains three simple ingredients - cocoa nibs from cocoa grown in Siparia, a small amount of cocoa butter and just a touch of Demerara brown sugar – can encourage people to support local farmers and make more conscious choices about the food they eat.

He envisions that T&T nationals who have moved abroad but come back to visit can take a box of the chocolates with them and thus take the parang icon’s story back home with them.

He’s encouraging those who purchase to chocolates to consider keeping the package rather than throwing it away so they can keep a piece of her with them.

“Daisy eh gone, she still here. Her legacy will go on.”

The vibrant design on the keepsake packaging, created by MarketMovers Designs features the following story:

Introducing to you Daisy Dahlin 60 and 70% chocolate bar.

Our 60% dark chocolate is infused with rich culture and heritage from the hometown of T&T's “Parang Queen” Daisy Voisin.

We hope that in every chocolate there's the sweetness of Daisy’s voice singing to you:

For now, the $15 bars can be purchased by order by calling 383-0381 or emailing sipareechocolit@gmail.com.

The chocolate will soon be available at major supermarkets as talks are ongoing in this regard. But, it’s currently available at all groceries, pharmacies and craft shops in Siparia.