Six things to know about measles (and the measles vaccine) 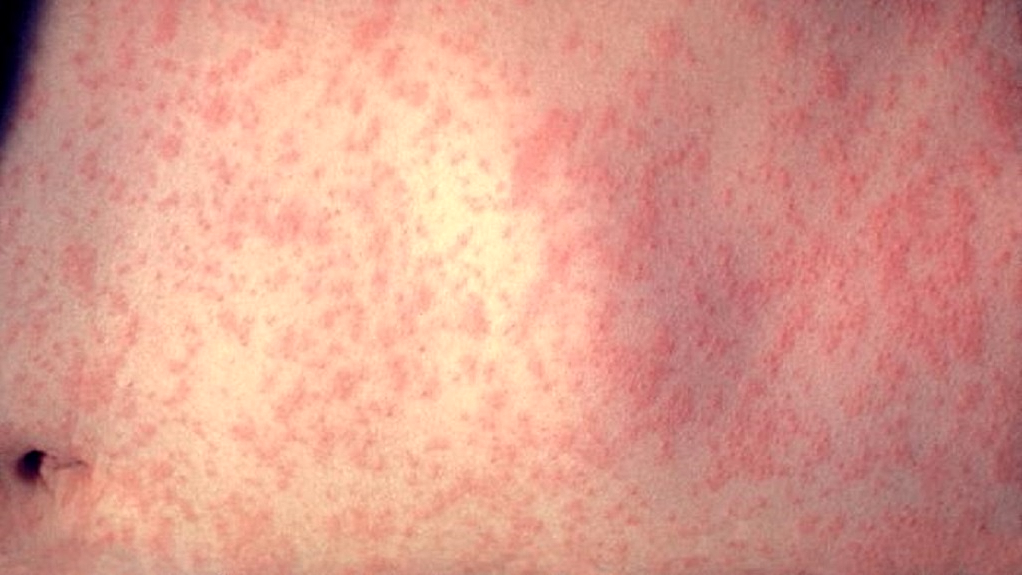 Photo: A rash on the torso of a young male caused by measles. Photo courtesy the CDC.

According to the World Health Organisation (WHO), more than 10 million people are affected by measles each year, particularly in Africa and Asia.

In developing countries where children are often malnourished and have limited or no access to medical treatment, measles kills easily.

Recently, there has been a rise in the number of measles cases in parts of the US, due in part to misinformation by anti-vaxxers who claim the vaccine is harmful.

Here are five things to know about measles and the measles vaccine, courtesy the US Centre for Disease Control and Prevention (CDC):

1. Measles can kill a child or leave them permanently disabled

According to the CDC, measles can bring about complications, some of which could be fatal.

In the 10 years before the vaccine was available in 1963, about 500 measles-related deaths were reported to the CDC every year.

Aside from death, children can develop ear infections which might result in permanent hearing loss.

As many as one out of every 20 children with measles gets pneumonia, the most common cause of death from measles in young children.

About one child out of every 1,000 who get measles will develop encephalitis (swelling of the brain) that can lead to convulsions and can leave the child deaf or with intellectual disability.

Since the vaccine, U.S. measles-related deaths have been increasingly rare – because the vaccine has prevented people from getting measles in the first place. The most recent U. S. death occurred in 2015.

Measles is a highly contagious virus that lives in the nose and throat mucus of an infected person. It can spread to others through coughing and sneezing. Also, measles virus can live for up to two hours in an airspace where the infected person coughed or sneezed. If other people breathe the contaminated air or touch the infected surface, then touch their eyes, noses, or mouths, they can become infected. Measles is so contagious that if one person has it, up to 90% of the people close to that person who are not immune will also become infected.

Infected people can spread measles to others from four days before through four days after the rash appears.

Measles is a disease of humans; measles virus is not spread by any other animal species.

3. Measles symptoms are similar to the common cold

A signature symptom of measles include a red rash which covers the child's body. Symptoms include fever, rash, runny nose and red eyes, among others.

4. The truth behind the measles vaccine and autism

According to publichealth.org, British surgeon Andrew Wakefield initially published a study in 1997 suggesting that the measles, mumps, rubella (MMR) vaccine was increasing autism in British children.

The paper has since been completely discredited due to serious procedural errors, undisclosed financial conflicts of interest, and ethical violations. Andrew Wakefield lost his medical license and the paper was retracted from The Lancet.

Nonetheless, the hypothesis was taken seriously, and several other major studies were conducted. None of them found a link between any vaccine and the likelihood of developing autism.

Today, the true causes of autism remain a mystery, but to the discredit of the autism-vaccination link theory, several studies have now identified symptoms of autism in children well before they receive the MMR vaccine. And even more recent research provides evidence that autism develops in utero, well before a baby is born or receives vaccinations.

5. Vaccines do not contain high levels of poisonous toxins

In fact, according to the FDA and the CDC, formaldehyde is produced at higher rates by our own metabolic systems and there is no scientific evidence that the low levels of this chemical, mercury or aluminium in vaccines can be harmful.

6. The MMR vaccine is 97 percent effective in preventing measles, mumps and rubella

CDC recommends children get two doses of MMR vaccine, starting with the first dose at 12 through 15 months of age, and the second dose at 4 through 6 years of age. Teens and adults should also be up to date on their MMR vaccination.

The MMR vaccine is very safe and effective. Two doses of MMR vaccine are about 97% effective at preventing measles; one dose is about 93% effective, according to the CDC.

The MMR vaccine is available at no extra cost from local health clinics nationwide.

No school for students without measles vaccine