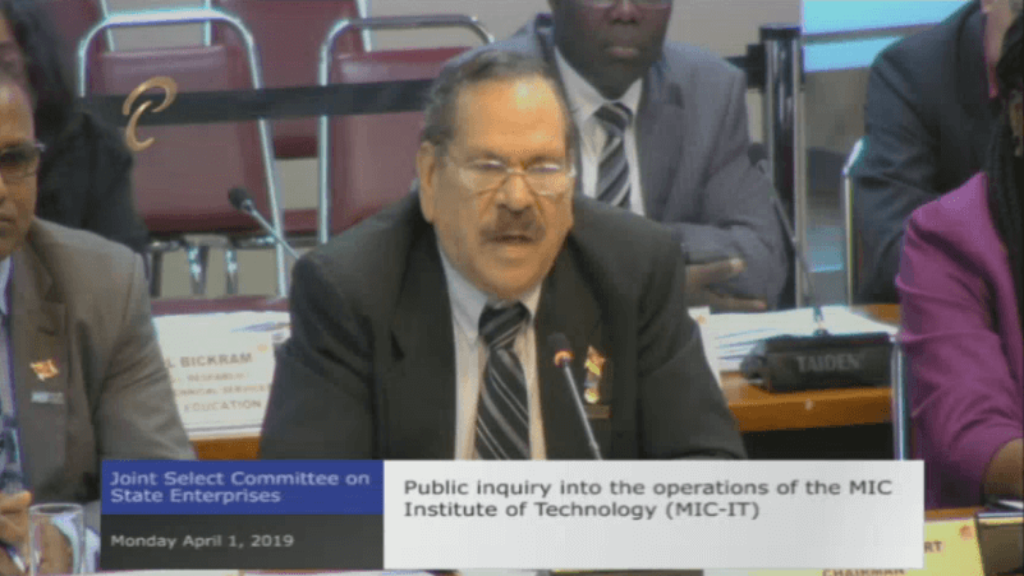 Retrenchments at the MIC Institute of Technology (MIC-IT) may become unavoidable as the institution attempts to continue its operations in the face of a significantly reduced subvention.

Appearing before the Joint Select Committee on State Enterprises on Monday, Chairman of the Board of Directors at MIC Prof Clément Imbert said the institute has been surviving on surpluses from previous subventions for almost three years.

The Committee was conducting an inquiry into MIC’s operations, including the performance of its Technical and Vocational Education and Training (TVET) programmes.

Imbert said the subvention received from Government for the last fiscal year was half of what they were accustomed to, so the institute has been trying its best to manage in spite of the major cutback in funding, particularly where the payment of salaries is concerned.

“We have tried our best to avoid any massive retrenchment at MIC, but we have not been able to renew contracts. If it continues like this it will probably be unavoidable but we have tried all kinds of cost-cutting measures to avoid that.”

While Chief Executive Officer Anil Ramnarine denied that there were any retrenchments in the cards for 2019, Imbert said if MIC does not have the funding it requires to pay staff and continue funding its projects, retrenchments will become necessary.

“I cannot go on record and say we will not retrench. If we don’t have the money, it is the highest cost in any budget so we may have to.”

Pressed further by JSC member Fazal Karim, Imbert said while there were no immediate plans to retrench or to prevent mass firings, MIC will have no choice but to begin sending employees home.

“I wouldn’t say that there are immediate plans, but it seems as though it is not too far off on the horizon if the funding continues as it is.”

But, MIC is attempting to generate funds outside of its subvention, with a training programme in which persons from Sint Maarten came to Trinidad to gain skills to assist in the country’s recovery efforts following the devastation of Hurricane Irma.

The institute is also expected to embark on a more aggressive marketing campaign.

Imbert said while the enterprise will not earn the training institute tens of millions, it will generate a “few millions” for MIC.

Meanwhile, the Committee also heard that the institute is currently owed a sum of $1.3 million by the Education Facilities Company Limited, down from $2.3 million.

In order for the institute to achieve its mandate, the MIC Chairman said it was a situation that called more funding allocated to training and for greater investment in innovation.

“We have to wake up in this country and spend much more money on innovation,” Imbert said.