Soca on the Seas Europe is sold out 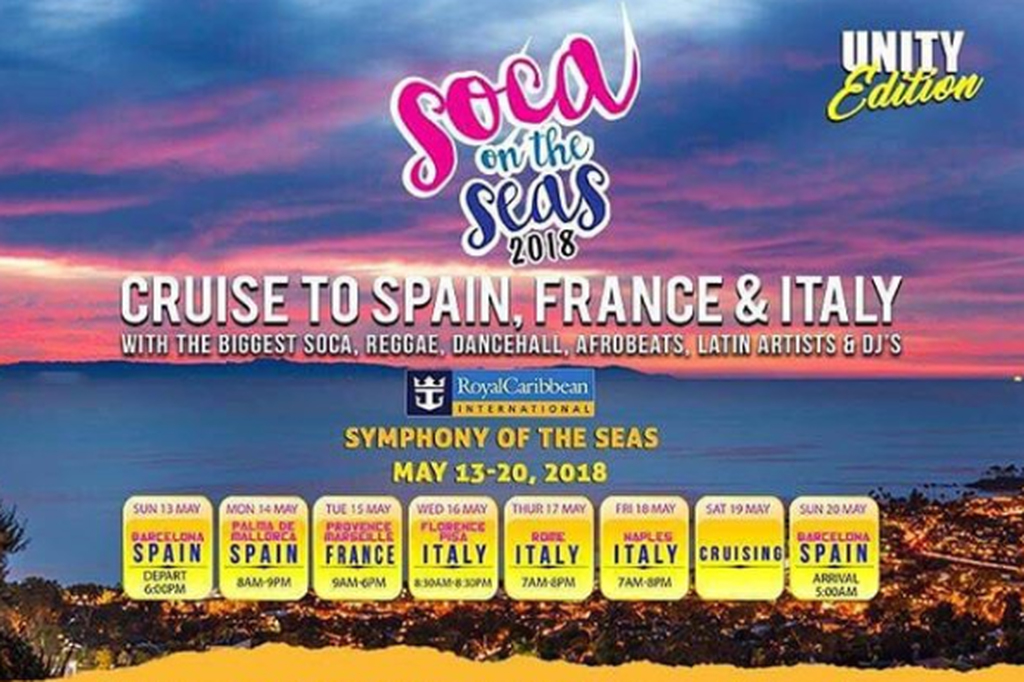 The European leg of Soca on the Seas is officially sold out. The S.O.T.S. team made the announcement via their Instagram on Sunday.

Dubbed the "Unity Cruise", the journey is set to take place over the Mother's Day weekend from May 13 to 20 with a number of stops including Barcelona, Spain, Provence/Marseille France, Florence/Pisa, Rome, and Naples, Italy.

The cruise will take place aboard the new Symphony of the Seas which will spend its first few months sailing the Mediterranean before being dispatched to the Caribbean.

Guests can also look out for live soca and dancehall with artistes such as Nailah Blackman, Turner, Preedy, Shurwayne Winchester, Ricky T and Charly Black.

Later this year in October, the flagship Soca On The Seas cruise will keep the party going from Miami’s Carnival onto the Mariner of the Seas ship which will undergo a US$90 million overhaul in Spring to include a new Italian restaurant by Chef Jamie Oliver.

Under the theme “Afro Soca” cruise, there will be performances from top artists from Trinidad and Tobago, Barbados, Grenada, St. Vincent, as well as big names from the African continent.  The cruise will sail to The Bahamas, where an SOS Raw J’ouvert will be held on the picturesque private island CocoCay. There will be performances also from soca artistes around the Caribbean including Barbados, Grenada and St Vincent.

In November, the spotlight will be thrown on the region’s top chutney artistes with the inaugural chutney cruise aboard the new Symphony of the Seas the weekend after Divali. The Chutney cruise will sail from Miami to Cozumel, Mexico.

Soca on the Seas expands to three cruises in 2018

9 things to know about Royal Caribbean's Symphony of the Seas

Watch: Take your Easter pump off-island at My Grenada Weekend