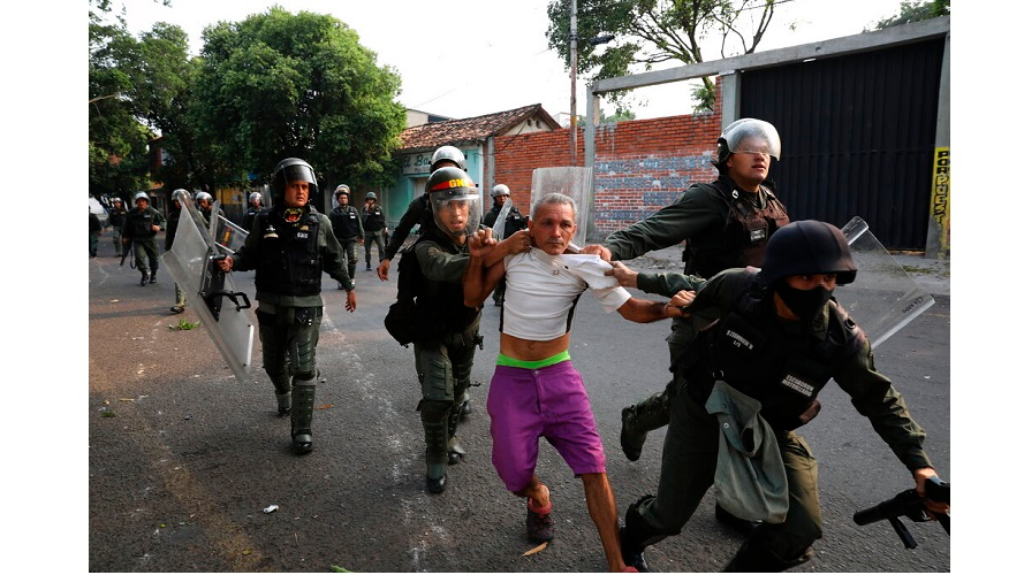 A man is detained during clashes with the Bolivarian National Guard in Urena, Venezuela, near the border with Colombia, Saturday, Feb. 23, 2019.

The opposition is calling on masses of Venezuelans to escort trucks carrying the nearly 200 metric tons of emergency food and medical supplies sent largely by the United States over the last two weeks across several border bridges.

Venezuela's National Guard responded forcefully, firing tear gas on the protesters, some of them masked youth throwing rocks, who demanded that the aid pass through.

There was no immediate word on their rank, but a video provided by Colombian authorities shows three of the men wading through a crowd with their assault rifles and pistols held above their heads in a sign of surrender.

The young soldiers were then ordered to lay face down on the ground as migration officials urged angry onlookers to keep a safe distance.

"I've spent days thinking about this," said one of the soldiers, whose identity was not immediately known. He called on his comrades to join him in abandoning their support for Maduro's socialist government. "There is a lot of discontent inside the forces, but also lots of fear."

The potentially volatile moment for both Venezuela's government and opposition comes exactly one month after Guaido, a 35-year-old lawmaker, declared himself interim president based on a controversial reading of the constitution before a sea of cheering supporters.

While he has earned popular backing and recognition from over 50 nations, he has not sealed the support of the military, whose loyalty to Maduro is crucial.

Before daybreak Saturday, national guardsmen in riot gear forced people to move away from the road leading to the Simon Bolivar bridge connecting Venezuela and Colombia.

The Venezuelan government had said that it was closing three of its bridges on the border.

"We're tired. There's no work, nothing," Andreina Montanez, 31, said as she sat on a curb crying from the tear gas that was used to disperse the crowd.

A single mom, she said she lost her job as a seamstress in December and had to console her 10-year-old daughter's fears that she would be left orphaned when she decided to join Saturday's protest.

"I told her I had to go out on the streets because there's no bread," she said. "But still, these soldiers are scary. It's like they're hunting us."

Guaido and the presidents of Colombia and Chile gathered early Saturday at the Tienditas bridge where they are expected to address the media before setting out to deliver the aid loaded onto trucks.

International leaders including U.N. Secretary-General Antonio Guterres are appealing for the sides to avoid violence.

But on Friday, a member of an indigenous tribe was killed and 22 others injured in clashes with security forces who enforced Maduro's orders to keep the aid out at a crossing with Brazil.

In previous waves of unrest, citizens have been tear-gassed and killed.

Venezuelan Foreign Minister Jorge Arreaza said the military would "never have orders to fire on the civilian population" and likened the aid push to a media spectacle.

"We can only hope that sanity and good sense prevail in Cucuta, in Colombia, and that it will remain as a big show, a big party, and that they don't try to open the doors to a military intervention," he said at U.N. headquarters in New York Friday.