In Somalia, hope fades in desperate search for missing 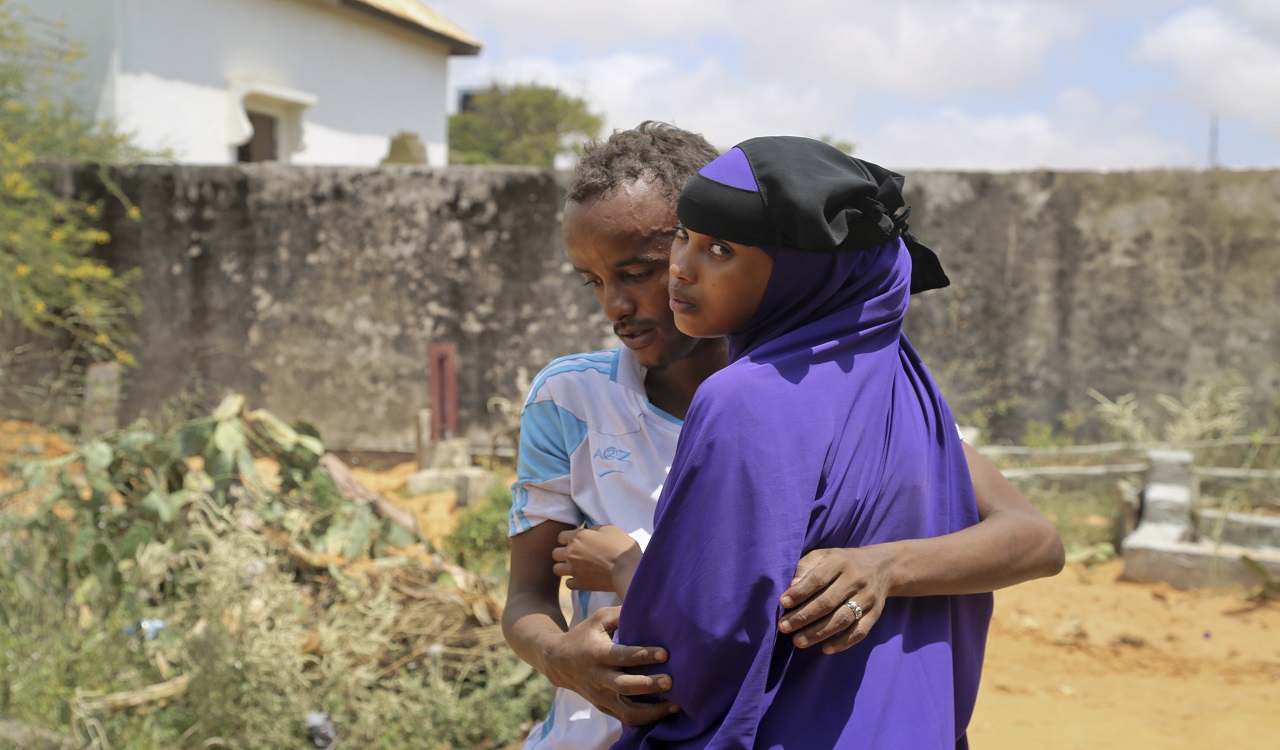 Zakariye Abdirisaq, left, who lost both his father and aunt in the bombing, is comforted by his cousin as they stand next to his father's grave, at a cemetery in Mogadishu, Somalia Tuesday, Oct. 17, 2017.

Anguished families scoured Somalia's capital Tuesday in search of scores still missing from Saturday's bomb blast that killed more than 300 people in one of the world's deadliest attacks in years.

Sitting outside a hospital mortuary, Hodan Ali quietly looked for her missing brother by showing people his photo on the screen of her mobile phone.

Fifty-year-old taxi driver Abdiqadir Ali was last seen Saturday on his way to a hotel to pick up a client just before the massive explosion on a busy street.

Ali, a mother of four, said she had visited most of Mogadishu's hospitals but neither she nor other family members found any sign of him.

"I am about to give up," she said in a soft voice, tears running over her veil. "Nothing is more painful than not knowing the whereabouts of your loved ones, whether life or death."

Across Mogadishu, Somalia's flag flew at half-mast, marking three days of national mourning. Mayor Thabit Abdi called for a citywide march on Wednesday in honor of the victims — and as a show of defiance.

"We must liberate this city which is awash with graves," Abdi said.

The death toll of 302 is expected to rise. Nearly 70 people were missing, based on accounts from relatives, said police Capt. Mohamed Hussein.

"My son has gone missing since the day of the attack. I would be very lucky if I had a portion of his body," Abdulkadir Mohamud said, breaking down in tears. "I do not have even his flesh. Please bring my son back."

With nearly 400 people wounded, with some burned beyond recognition, international aid arrived to help overwhelmed hospitals.

A United States military plane landed in Mogadishu with medical and humanitarian aid supplies. Dozens of critically injured have been airlifted to Turkey for treatment. A medical team from Djibouti arrived for more evacuations, and neighboring Kenya said it would evacuate 31 people and deliver 11 tons of medical supplies.

Somalia's government has blamed the attack on the al-Shabab extremist group, which has not commented.

But analysts said there is little doubt that Africa's deadliest Islamic extremist group carried out the bombing. "No other group in Somalia has the capacity to put together a bomb of this size, in this nature," said Matt Bryden, a security consultant on the Horn of Africa. Analysts have suggested that al-Shabab, an ally of al-Qaida, may have avoided taking responsibility because it did not want to be blamed for the deaths of so many civilians.

Al-Shabab has waged war in Somalia for more than a decade, often targeting high-profile areas of the capital. Earlier this year, it vowed to step up attacks after both the Trump administration and Somalia's recently elected Somali-American president, Mohamed Abdullahi Mohamed, announced new military efforts against the extremists. Mohamed vowed to wipe them out within two years.

The U.S. military has stepped up drone strikes and other efforts this year against al-Shabab, which is also fighting a 22,000-strong African Union force in the country.

Saturday's explosion further battered an impoverished country left fragile by decades of conflict, and it raised more doubts over the government's ability to secure the seaside capital of more than 2 million people.

In a sandy cemetery at one Mogadishu hospital, mourners carried the coffin of a woman killed in the bombing. The crowd prayed in low voices under the scorching sun.

The woman died Sunday of her wounds, a day after her husband. They had been traveling on a crowded street when the truck detonated nearby.

"God, please bring those who killed both my father and aunt before our eyes or book them to justice," Zakariye Abdirisaq said, wiping his eyes. He squatted by the fresh grave, putting his hands to the earth and then to his lips, one by one. Then he prayed.

International condemnation has poured in, with the United States calling the attack "cowardly" and the United Nations special envoy to Somalia calling it "revolting." Michael Keating said the U.N. and African Union were supporting the Somali government's response with "logistical support, medical supplies and expertise."

The U.N. Security Council stood in silent tribute to the victims Tuesday and U.N. Secretary-General Antonio Guterres asked to meet with Somali minister Abdullahi Hamud to personally extend his condolences. Hamud, who is minister of state in the prime minister's office, is at U.N. headquarters in New York for Africa Week activities.

After three days, many family members of those still missing are giving up.

Afrah Ibrahim, 30, searched for clues of what happened to his sister by using a stick to pick through clothes of victims buried in a cemetery. He did not find any worn by his sister.

Lowering his head in anguish, he said, "I am done."

Death toll from blast in Somalia's capital rises to 189