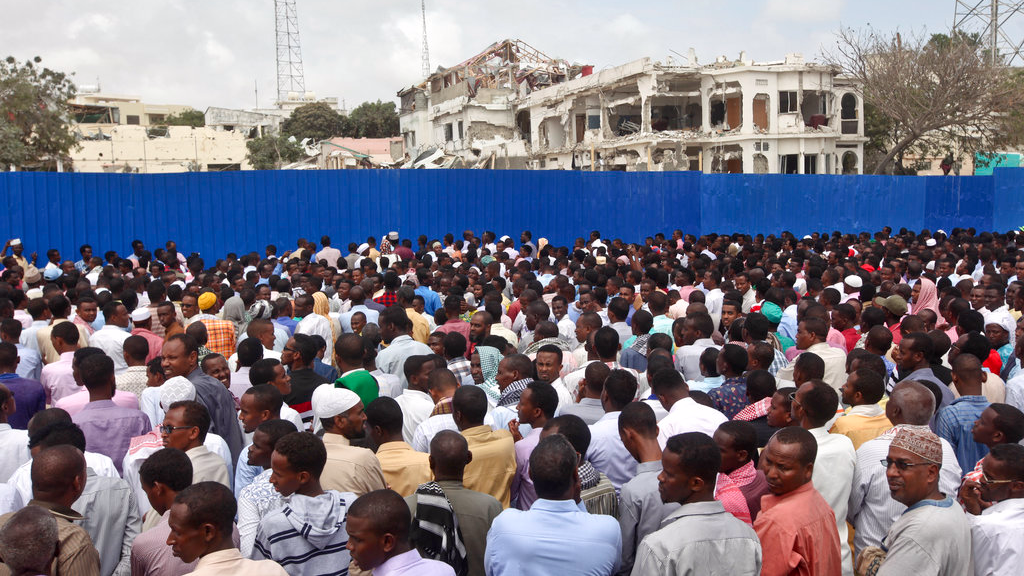 Thousands of Somalis gather to pray at the site of the country's deadliest attack and to mourn the hundreds of victims, at the site of the attack in Mogadishu, Somalia Friday, Oct. 20. More than 300 people were killed and nearly 400 wounded in Saturday's truck bombing, with scores missing.

Thousands of anguished Somalis gathered to pray Friday at the site of the country's deadliest attack, while the toll rose again to 358 and dozens remained missing.

The U.S. military said it had resumed its fight against extremist group al-Shabab, which has been blamed for the attack, with a drone strike.

Somalia's information minister Abdirahman Osman announced late Friday that 56 were people still missing from Saturday's truck bombing on a busy street in Mogadishu. Another 228 people were wounded, and 122 had been airlifted for treatment in Turkey, Sudan, and Kenya.

"This pain will last for years," said a sheikh leading the prayers, as long lines of mourners stood in front of flattened or tangled buildings.

The U.S. drone strike occurred Monday about 35 miles (56 kilometers) southwest of the capital, the U.S. Africa Command told The Associated Press. It said it was still assessing the results.

Al-Shabab has been blamed but has not commented on the bombing, which Somali intelligence officials say was meant to target Mogadishu's heavily fortified international airport. Several countries have embassies there.

The U.S. has stepped up military involvement in the long-fractured Horn of Africa nation since President Donald Trump approved expanded operations against the group early this year. The U.S. has carried out at least 19 drone strikes in Somalia since January, according to The Bureau of Investigative Journalism.

Earlier this week, a Pentagon spokesman said the United States has about 400 troops in Somalia and "we're not going to speculate" about sending more.

In April, the U.S. announced it was sending dozens of regular troops to Somalia in the largest such deployment to the country in roughly two decades. The U.S. said it was for logistics training of Somalia's army and that about 40 troops were taking part.

Weeks later, a service member was killed during an operation against al-Shabab. He was the first American to die in combat in Somalia since 1993.

In Somalia, hope fades in desperate search for missing