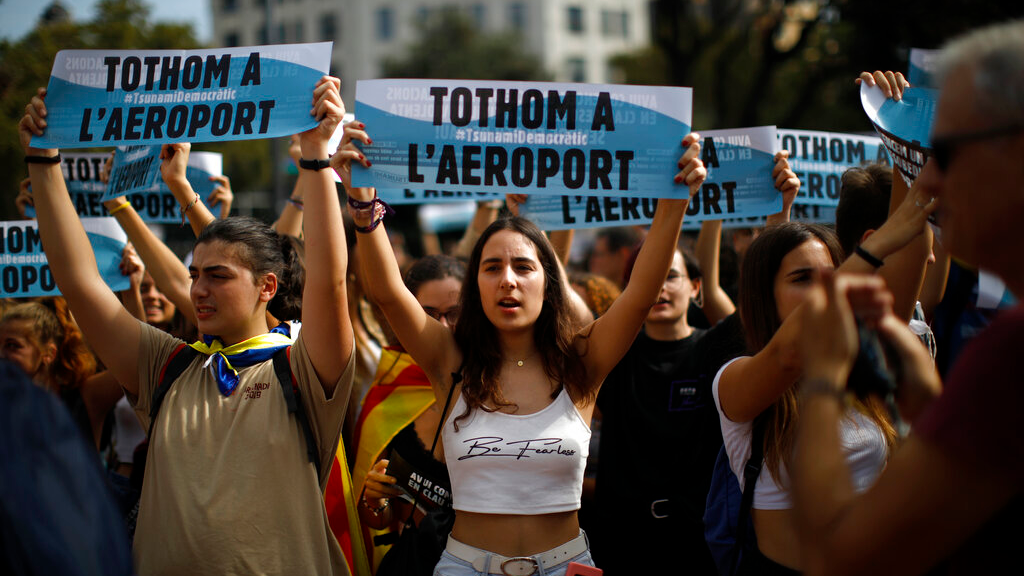 Young people hold up signs in Catalan reading "Everybody to the airport" during protests in Barcelona, Spain, Monday, Oct. 14, 2019. Spain's Supreme Court on Monday convicted 12 former Catalan politicians and activists for their roles in a secession bid in 2017, a ruling that immediately inflamed independence supporters in the wealthy northeastern region. (AP Photo/Emilio Morenatti)

New disruptions to Catalonia's transportation network on Tuesday followed a night of clashes between activists and police over the conviction of separatist leaders, as Spanish authorities announced an investigation into the group organising the protests.

Authorities said that three people were arrested and more than 170 others injured, including about 40 police officers, during the clashes well into the early hours of Tuesday between angry protesters and riot police at Barcelona's international airport and elsewhere across the northeastern Spanish region.

Thousands of passengers were stranded at the airport, with many forced to walk with their luggage on highways and across fields.

The protesters were responding to an online campaign by Tsunami Democratic, a loose, leaderless grassroots group that uses encrypted messaging apps to call for peaceful disobedience.

In a landmark ruling Monday, Spain's Supreme Court acquitted the Catalan politicians and activists from the more serious crime of rebellion for pushing ahead with a banned referendum on October 1, 2017, and declaring independence based on its results. But judges found nine of them guilty of sedition and handed down prison terms of nine to 13 years. Four of them were additionally convicted of misuse of public funds and three were fined for disobedience.

The court also barred all of them from holding public office. That has an immediate impact in the upcoming November 10 election because six of them were planning to run as candidates to Spain's parliament.

The verdict is likely to be a central issue in the run-up to the vote but "it is unlikely to substantially alter the electoral outlook unless the situation worsens significantly in the region," said Antonio Barroso, a political risk analyst with the London-based Teneo consulting firm.

He said Catalan separatist politicians wanted to use the backlash against the ruling to woo pro-independence voters to the polls.

Others have feared that swelling support for Catalan separatism because of the convictions could make the next political term even more key to either breaking the deadlock with separatists or making it a chronicle problem. Spain's caretaker prime minister and Socialist leader Pedro Sánchez, who won the April election, but failed to get support for a minority government, is hoping to remain in office.

But even from the early hours after the 493-page Supreme Court ruling was issued, very different views emerged from Madrid and Catalonia. While Sánchez called for beginning a "new phase" and urged Catalan separatists to abide by the law, the ruling invigorated the wealthy region's independence movement, with many of its leaders making new calls to work toward effective secession or repeating the slogan "we will do it again."

"We have to continue defending the right of Catalonia to self-determination," the regional president, Quim Torra, told foreign reporters in Barcelona on Tuesday. "A referendum is the most positive solution for solving this situation."

His regional minister for foreign action, Alfred Bosch, urged the Spanish prime minister to change his attitude. "We don't see any proposal, we only see 100 years of prison, exile and repression," Bosch said.

The caretaker Spanish foreign minister, Josep Borrell, soon due to become the European Union's top diplomat, said the sentence wasn't resolving the underlying political problems that only dialogue "in the framework of the Constitution" could.

Spain's constitutional law says that the country is indivisible.

"Yesterday, today and tomorrow it is and remains a political problem that has to be solved," Borrell told foreign reporters, adding that Catalan separatists shouldn't ignore Catalans like him who are against independence.

"When one excludes part of the population because they don't think like one, and only considers as the people those who think like one, this is a totalitarian attitude," he said.

More protests took place Tuesday, with on and off blockades of regional roads and railway lines. A three-day student strike begins Wednesday.

Spain's airport operator, AENA, said that more than 1000 flights were scheduled to operate normally in Barcelona on Tuesday, with around 20 flights canceled compared to 110 on Monday.

The regional emergency service, SEM, said that 131 people had been treated overnight for injuries, most of them at the airport. Two dozen people were taken to hospitals, one with serious eye damage.