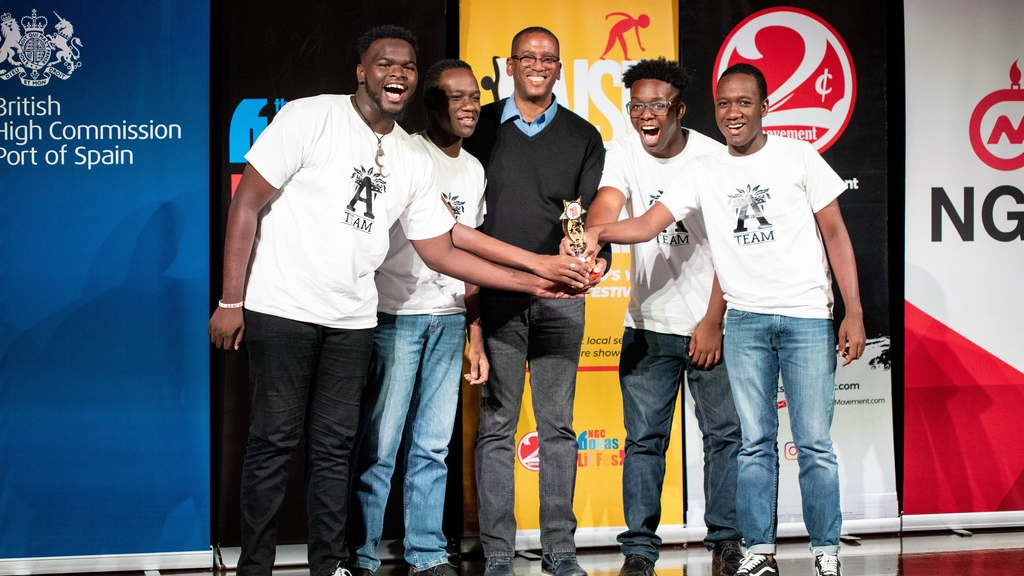 St George's College has retained its title of Raise The Bar champion in the 2018 edition of the National Secondary Schools Spoken Word Intercol.

The win is the school’s second in as many years of the competition’s existence as Raise The Bar.

On Sunday, November 11, the 2018 National Youth Poetry Festival culminated in the final round of competition of Raise The Bar, a project of the NGC Bocas Lit Fest in partnership with the 2 Cents Movement, supported by the British High Commission and the National Gas Company.

A highlight of this year’s competition was the group round where students were required to centre their pieces on the theme of Gender-Based Violence (GBV), the basis of collaboration between the 2 Cents Movement and the British High Commission over the past year.

British High Commissioner Tim Stew said: “We’re happy to work with 2 Cents to try to address the gaps in Gender Based Violence (GBV) education. Using spoken work poetry, you students can take the leadership of the gender conversation, with your peers in schools, your family members, your wider community.”

In his closing remarks, the Chief Justice reflected soberly that while he was honoured and delighted to be asked to judge he was “saddened because as a person who’s supposed to be in leadership and setting the bar in society, this raw, honest, edgy, truthful stuff is not being listened to by those of us who need to be hearing it.”

An impressed Marina Salandy-Brown, Bocas Lit Fest founder and director, declared at the end, “I can tell you we raised the bar; when we started doing this maybe 5 or 6 years ago, it was fledgling. And I think what we’ve seen this evening is something really, really awesome!”

WATCH: Options galore for literature lovers as Bocas kicks off