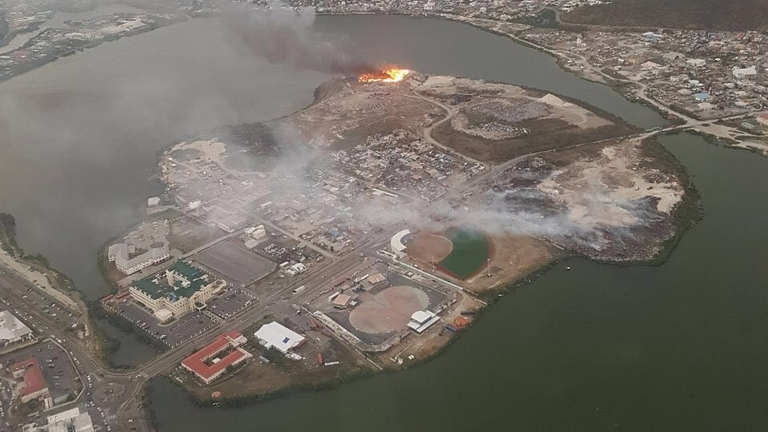 A former Government Minister in St Maarten is predicting the cancellation of this year’s Carnival if the fires at the landfill are not contained.

The landfill, located on Pond Island in Philipsburg St. Maarten, has been burning for days.

“It is damaging to the health of country and citizens but it basically shuts down the country. For the past three days government services, schools, utilities and business have been shut down, affecting the economy and our way of living,” said Christopher Emmanuel, former Minister of Environment, Spatial Planning, Infrastructure, Public Works and housing.

“It is definitely affecting our tourism product. There is a blanket of smoke that is toxic. The majority of visitors are cruise passengers. If this continues I am seeing a cancellation of Carnival because that area is exactly where Carnival is,” he said.

St Maarten’s Carnival is in April.

Emmanuel says if his party wins the upcoming election, they will invest in viable waste energy.

This, as operations on the island has ground to halt due to fire and smoke from the country’s lone landfill.

He told Loop the time has come to look at renewable energy as a solution.

“The simple fact of the matter the landfill is 20 years over its existence, we continue to dump every type of garbage on it and expecting a solution. We have passed that stage and it is time to look for renewable energy to mitigate the fires at the landfills. The landfills simply can’t take any more garbage,” he said.

Emmanuel said the fires are sometimes caused by people burning copper but most times the garbage catches on fire on its own.

Emmanuel said he brought a solution to the country to invest in waste energy which would involve mining the landfill to generate energy from the garbage to decrease the consumption of fuel and reduce utility bills among other benefits.

He said that it will take at least 18 months for a plant to be built.

“But in the meantime we can stack the garbage and make things much better because you don’t have to use the momentum of having equipment churning the rubbish that creates other gases that are combustible,” he said.

He said while the facility is being built a programme will be implemented in homes to encourage citizens to separate their garbage for collection.

Barbadian family fighting to get out of St Maarten