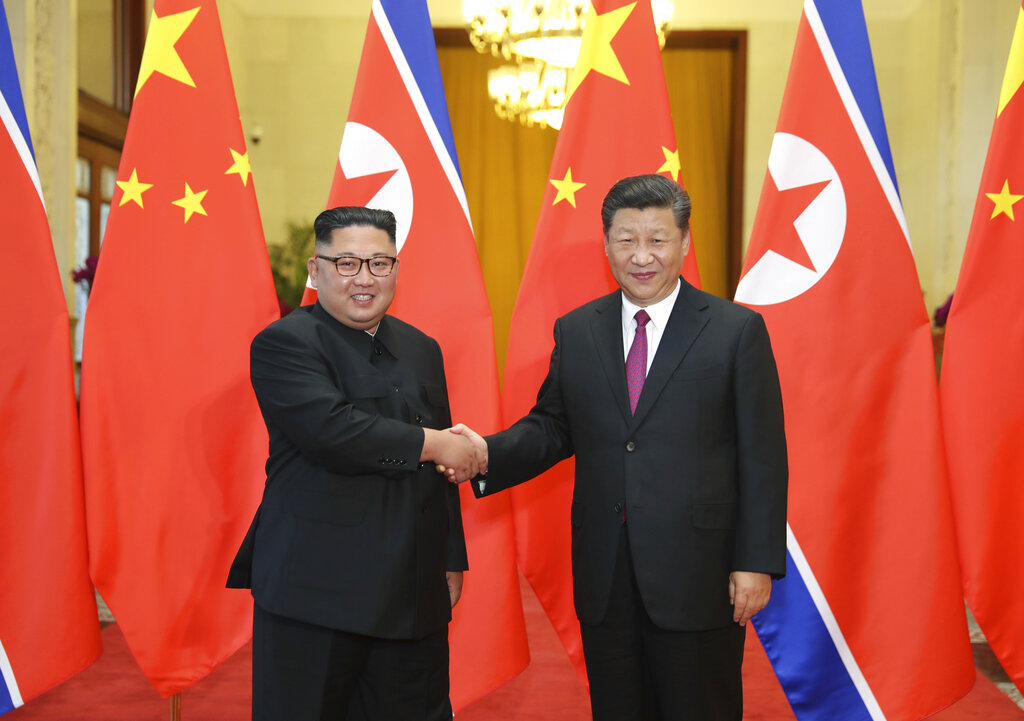 In this June 19, 2018, file photo released by China's Xinhua News Agency, Chinese President Xi Jinping, right, poses with North Korean leader Kim Jong Un for a photo during a welcome ceremony at the Great Hall of the People in Beijing. (Ju Peng/Xinhua via AP, File)

Chinese President Xi Jinping will make a state visit to North Korea this week, state media announced Monday, as U.S. talks with North Korea on its nuclear program are at an apparent standstill.

Xi will meet with North Korean leader Kim Jong Un during the visit on Thursday and Friday, Chinese state broadcaster CCTV said. It said the trip will be the first by a Chinese leader in 14 years.

The visit coincides with the 70th anniversary of the establishment of diplomatic relations between China and North Korea, CCTV said. The broadcaster added the leaders will exchange views on the situation on the Korean Peninsula.

The visit comes as negotiations between the U.S. and North Korea appear to have reached an impasse.

A summit in Vietnam in February between Kim and President Donald Trump failed after the U.S. rejected North Korea's request for extensive relief from U.N. sanctions in exchange for dismantling its main nuclear complex, a partial disarmament step. Since the summit's breakdown, no major contacts between the U.S. and North Korea have been announced.

Kim traveled to the Russian Far East in April for a meeting with Russian President Vladimir Putin. The move was viewed as aimed at strengthening his leverage over Washington and persuading Moscow to loosen its implementation of the international sanctions against North Korea.

Last month, North Korea fired short-range missiles and other weapons into the sea in an apparent effort to apply pressure on the U.S.

KCNA reported in April that Kim said he will give the U.S. "till the end of the year" to reach out with further proposals.

Since taking office in 2012, Xi has met with Kim four times in China. The meetings were timed in proximity to Kim's meetings with Trump and South Korean President Moon Jae-in, highlighting Beijing's role as a player in the nuclear standoff.